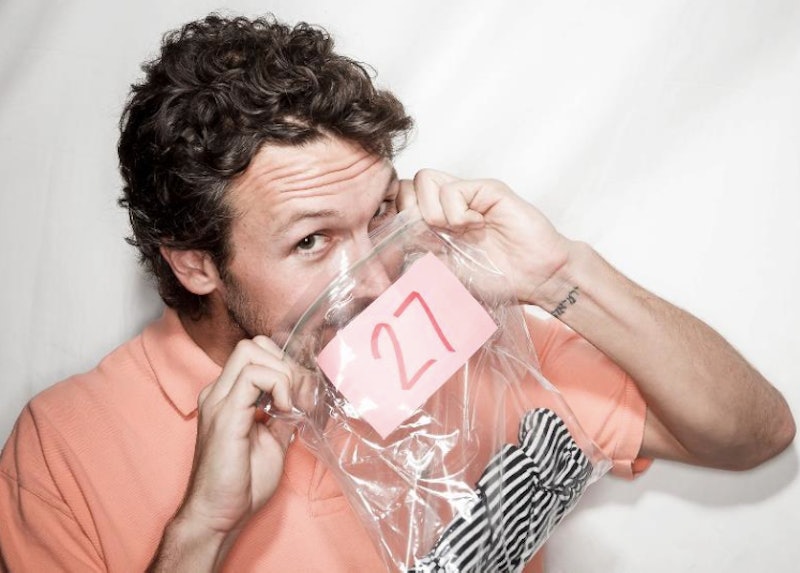 Poor judgement when it comes to picking dates? You could stop thinking about it entirely and try just smelling your way to true love. Texas news station KHOU has clued me in to a semi-new dating trend: Pheromone parties. Kind of like speed dating for your hormones, pheromone dating parties started showing up in 2012 and now seem to be popular in Texas, California, and London.

As you may remember from high school biology, pheromones are the chemicals that humans (and other animals and plants) secrete to signal things to one another. Pheromones secretly influence the responses and behavior of those around us, and sex pheromones are released to lure in members of the opposite sex. These invisible messengers can convey information about age, sex, and genetics for men and indicate when a woman is ovulating. They're the reasons women's periods sync up sometimes.

At the pheromone dating parties, participants bring a slept-in t-shirt to the event and then pick dates based on smell (which seems like a really gross way to go about this?). If pheromones are working as they theoretically should, wouldn't they just do their thing as you talked to people in a normal speed-dating kind of way? Maybe pheromones get all mixed up by personality traits and looks, and the t-shirt test is a purer way to go about this. Obviously, there's not a lot of comparative research — though studies have shown that people prefer different human scents, and these preferences are dictated by genetics.

It may be impossible to say whether we are better off picking people for ourselves like rational adults or trying to go about it like our cavemen ancestors did and pick mates based on smell. But I really don't do so hot at the former, so I'd be willing to give the cave people way a try. Plus, they serve absinthe at these parties. Drink absinthe and smell each other. It's got to beat OKCupid, at least.