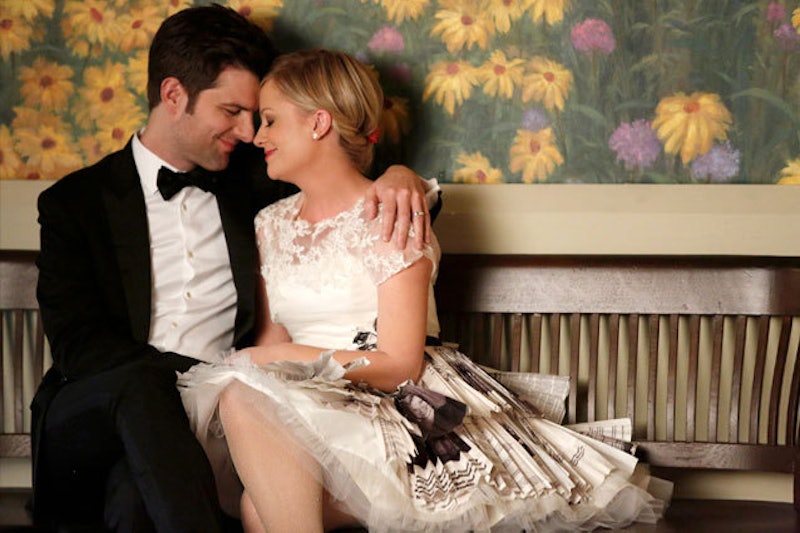 There's been a lot of baby talk on this season of Parks & Recreation , but somehow, not quite enough. We've seen Ann and Chris shopping for baby supplies and deciding to move to Michigan to raise their child, and watched Ron learn that he has to change some of his solitary ways as he prepares to become a father. But what about Leslie Knope and Ben Wyatt?

Fans went into Season 6 knowing that there would be plenty of family based story lines, as Ann spent the end of season five trying to get pregnant and Ron found out that his girlfriend Diane was pregnant in the season finale. But it seems that the writers completely forgot about another potential baby storyline from last season, and have been purposely ignoring it since then.

In last season's "Jerry's Retirement," Leslie visits Jerry at home to apologize for the last minute, sub-par scrapbook she made him. In response, Jerry shows her his family photo albums and says that his favorite part of working in the parks department was being able to go home every day at 5 p.m. and spend time with his family. It was a sweet moment from the office punching bag, and one that inspired Leslie. At the end of the episode, she shows Ben a new scrapbook she's made, this one marked as their family album. She suggests that they take a real day off to talk about starting their family, and Ben agrees.

And that's the last we heard about it. As Ron, Chris and Ann talk about their growing families, Leslie is her usual hardworking self. It made sense that she needed to focus on her job as the threat of recall grew, but there could have been some kind of mention of her and Ben's plans for the future, or at least that they've decided to put them on hold.

Then came last week's "Recall Vote." Even though it was grossly unfair for someone as dedicated to Pawnee as Leslie, she was recalled from her position on the city council and given 30 final days in office. The episode showed her mini-breakdown at the news, and eventual recovery that included a commitment to doing as much as she can in her last days — because she's Leslie Knope and she doesn't give up.

On Thursday, two new episodes aired, the last that will be shown until January. Since they included Leslie's final days in office, it seemed possible that she and Ben would go back to that conversation. But then Ben lost his job, and the focus shifted — for a few minutes. Ben easily got another job as an accountant, and then another as city planner, so the pair knew that even though Leslie was soon to be unemployed, he'd be working.

For the first time since Parks and Rec started, Leslie Knope will be out of a job. She'll have free time, and thanks to Ben's new role they won't have to worry about their financial situation. So why hasn't their family conversation ever been returned to?

Leslie is thinking about her future and trying to figure out what to do next. Shouldn't someone who brought up the idea of having kids just a few months ago include that in her plans? It just doesn't seem very Leslie to bring up something so major, and then forget all about it. Even the nearly-forgotten Lot 48 was a major part of this week's episode "The Cones of Dunshire."

Maybe the writers are trying to avoid having too many actual babies on the show, but Ann is leaving and Ron's home life is only shown in brief glimpses. Giving a main character a child can be challenging and tends to have a huge affect on every future episode, but if they didn't want that to happen, it shouldn't have been brought up to begin with.

With "Jerry's Retirement" the Parks and Rec writers started a story that needs to be finished, or at least mentioned again. Hopefully when the show returns in January we'll get some more insight into Leslie's future plans and when she and Ben will start filling that album.