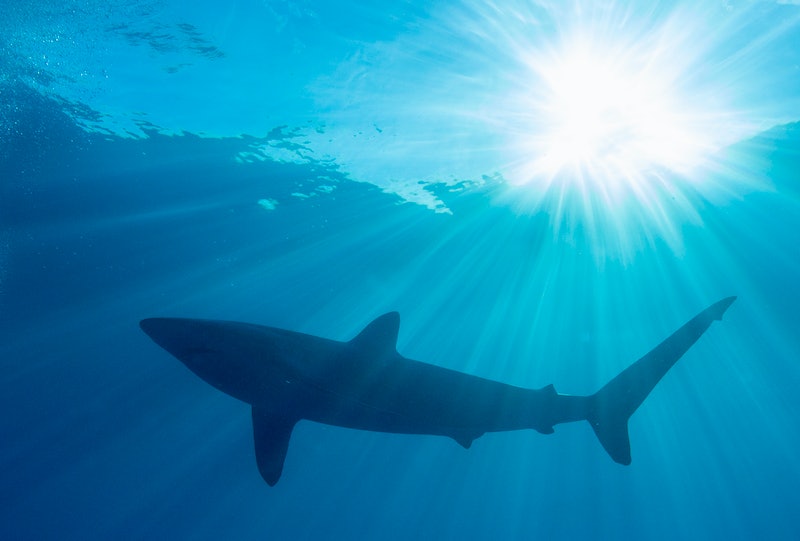 While Discovery Channel’s Shark Week likes to devote a lot of time to the ever-popular and often-terrifying great white shark, there are other types of sharks that Shark Week features. This year’s Shark Week will feature another species of shark — the sevengill shark — as divers try to tag them to learn more about their ways in the special Sharks of the Shadowland . The animals are even somewhat of a mystery to researchers, but the special is dedicated to teaching us all more about them. So, what exactly is a sevengill shark, anyway?

Discovery's Sharkopedia reports that broadnose sevengills are a type of cow shark, and based on the fact that their skeletons resemble fossils of ancient sharks, scientists think that they are related to sharks that lived over 300 millions years ago. Sharks of the Shadowland takes place in Fiordland on the South Island of New Zealand, which has so much rain that a layer of freshwater is always on top of the salt water — creating eery shadows in the water. Scientists Kina Scollay and Jenny Oliver will study the sevengills in this environment to understand their hunting habits and to see if scuba divers will be safe in the water with these sharks.

To get you ready to explore the depths with the sevengills sharks, here are seven facts you need to know.

The name of this shark doesn't come from a very unique place, but the extra gills are what make the broadnose sevengill shark unique since most sharks only have five gills. The extra gills are a trait that ancient sharks had.

2. If You See A Sevengill Shark, You'll Probably See Another

The scuba dive company SD Expeditions in San Diego, California started seeing more sevengill sharks near the area of the La Jolla Cave back in March 2013. The company found that when they saw one sevengill, another one (or two) was usually not far behind, and the company wrote that some studies point to the sevengill being a social creature.

Discovery is covering the sevengills because researchers are finding evidence that sevengill sharks are starting to hunt in packs — a truly frightening prospect.

This isn't actually that bizarre of a shark fact in general, but MarineBio outlined how sevengills are born and the idea of having almost 100 sharks being born at the same time was completely horrifying (but perhaps, adorable?) to me.

5. Their Flesh Was Very Valuable

In the 1980s in California, sevengills were overfished because of their flesh to the point that their population numbers decreased significantly in the San Francisco Bay.

My marine biologist boyfriend gets upset over the fearmongering of sharks that Shark Week sometimes encourages. But, sevengills have been known to attack people — including Oliver back in 2012, and her experience helped inspire Sharks of the Shadowland.

7. They Are Sharks Of Mystery

Yes, there are some details about the broadnose sevengills that scientists know (like that the largest reported one was 10 feet long), but, in general, not too much about the sevengills is known — so, Sharks of the Shadowland will hopefully shed some light on these elusive sharks.