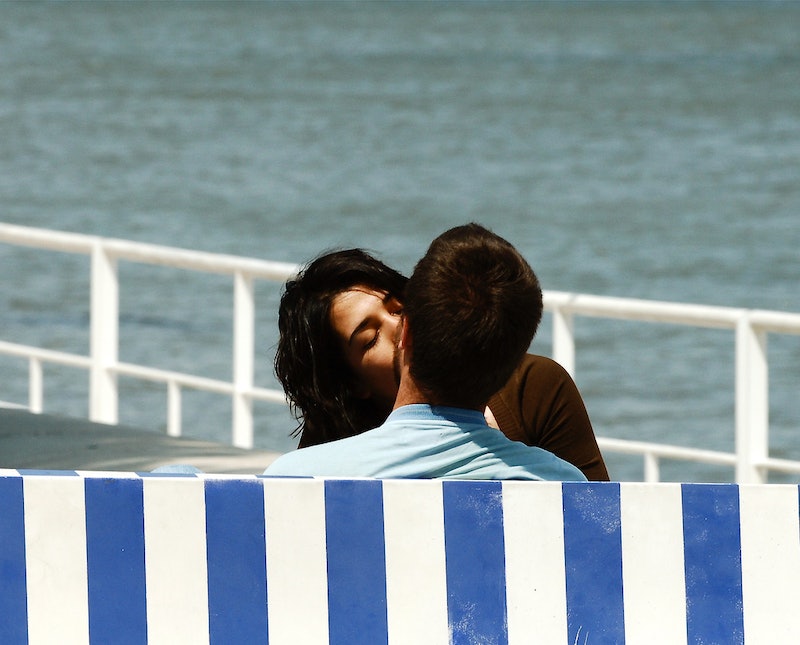 Getting into a new relationship is always exciting. Finally, all the weeks, months, or even years of flirting and spending way too long interpreting what exactly that winky face emoji means have paid off in the form of a stable-ish partnership with the object of your affection. You're in the honeymoon stage at this point, and you probably wouldn't be surprised to learn that the sun actually shines out of your new significant other's rectum. But even if you're completely infatuated with your new beau and they seem obsessed with you, there could be trouble lurking in the distance. But what are the early signs someone is a cheater?

An April 2015 study by the Journal of Marital and Family Therapy revealed that 57 percent of men and 54 percent of women have been unfaithful at some point in one of their relationships. And unfortunately, even though your new partnership seems bulletproof, there's no guaranteeing that your S.O. will stay loyal forever. Even more frustrating is that new technology has blurred the lines of what actually constitutes cheating, so your partner might think that their behavior is totally fine even though everyone else would agree that it's definitely not.

The good news (I guess?) is that you don't have to waste years of your life with someone who's bound to cheat on you if you know what to look for early on in the relationship. While not all of these are guaranteed signs that your new partner has a future of infidelity ahead of them, they're definitely worth noting if they happen to you... and if you see that a few of them are going on, it might be best to cut your losses now and head for the hills before you get your heart broken.

1. They Don't Introduce You To Any Friends Or Family

It's totally understandable to hold off on meeting the family until you guys are serious-serious, but at some point, it becomes pretty obvious when your partner is truly avoiding introducing you to people in their life. When we're excited to be with someone, we're usually chomping at the bit to show them off to the world. If your S.O. seems like they're really holding back on having you meet all the special people they know, there's a decent chance that it's because they don't want anyone to know that they have a side piece... including you.

2. They Rarely Call You By Your Name

The idea of your partner only calling you pet names because they don't want to mix up your name with someone else's is one of the biggest cheating stereotypes around, but that's because it has some substance. I'm not saying that it's bad to use pet names (though if you use "boo" unironically, then you need to stop), but if you're not even 100 percent sure that your new partner doesn't think your name is spelled b-a-b-y, then it could be a yellow flag at the least.

Even if you are thee. worst. at forgetting about online accounts that you left active, it's pretty standard to go out of your way to get rid of any online dating apps or accounts you had before getting serious with your S.O. They might say that the only reason their OK Cupid profile is still up is because "they just don't care enough to take it down," but that's basically the new relationship equivalent of "forgetting" to put your wedding ring on. If there's any recent activity on their account from their end, that should remove any doubt you have that they are definitely keeping their options open.

4. They Cheated On Their Previous S.O. With You

I don't necessarily believe in the mantra of "once a cheater, always a cheater," but I do believe that anyone who cheats with you will cheat on you. If you know for a fact that your relationship with your new guy or girl didn't have an honest beginning, there's no reason for you to think that you're the Special One that will finally convince your partner to be faithful til the end. If they hid their relationship status from you before you became an item, that's just a bonus sign to convince you to nope the hell out of there.

5. They Never Show Affection In Public

Nobody is asking you to force your tongue down anyone else's throat to make you prove your loyalty. That said, if your partner straight-up refuses to hold your hand, give you a peck on the cheek, or do anything else that would reveal to the world that you're something other than best buds, there could be a very sinister reason why. Maybe they're afraid you'll run into one of their old flames, or maybe they want to see exactly how many strangers would want to bang them if they appeared single, but neither option is very good from where you stand.

6. They Act Differently With You Around Certain Friends

They might be all lovey-dovey with you when you're alone, but if you notice their behavior changes when they're around their friends of the opposite sex (or worse, one friend in particular), it's probably because they want to appear like they're at least a little bit available. Be on the lookout for them acting indifferent or even a bit hostile towards you when they're around the person or people you're concerned about--- it might mean they're trying to leave the door open for someone else.

7. They're Paranoid About You Cheating

Some people are just unbelievably, irrationally jealous, and that's not exactly a good way to start any relationship. However, if your partner seems convinced that you're always texting your ex or hanging out with sexy people behind their back, they might be doing something called "projecting." This means that they're subconsciously attributing their own unsavory behavior to someone else, partially to remove the blame from themselves and partially because they're so hyper-aware of their own actions that they interpret everything you do to mean that you're also being sketchy. If your partner asks to see your phone, ask the same of them. Their reaction will tell you everything you need to know.

8. They're Unusually Secretive About Certain People In Their Lives

Who's that girl that is constantly popping up on his Snapchat? "Just a friend." That guy in almost all of her photos from the night before with his arm around her? "Oh, don't worry about him." If you know everything about most of your beau's friends, but they're super quiet about one in particular, it might be because they're trying extra hard to assure you that this mysterious person is no big deal when they're actually a major threat to your relationship. Listen to your gut--- if your partner won't even tell you where they met this person, it might be because the most compelling tidbit about them is that they're banging your S.O. every Wednesday night.

9. They Don't Mention Your Relationship To Each Other When They Introduce You To Someone

It's pretty standard to mention anyone's relationship to you when you introduce them to someone new. So if your partner introduces their boss as their boss, their aunt as their aunt, and you as... you, and only you, then there's a possibility they're trying to conceal exactly how they know you. It's one thing if you're meeting their family after a long time and everyone already knows who you are by now, but be on alert if you're only introduced by your name to someone they might be attracted to.

10. They Refuse To Have Anything About Your Relationship On Social Media

I'm not ridiculously public about my relationships on Facebook, and neither is my boyfriend. But for many people, having at least some indication of being in a relationship on social media is a big deal. If neither of you really care about becoming "Facebook official" or appearing coupled-up in photos, then this might not be anything to think twice about. The issue comes in when they adamantly refuse to show even the slightest indication that they're dating you ... even if you've told them you would appreciate it if they did. Doing things like untagging themselves from all your photos or deleting your wall posts is a massive sign that they don't want at least one of their followers to know that they're taken, and at the very least, it's worth having a discussion with them about it.