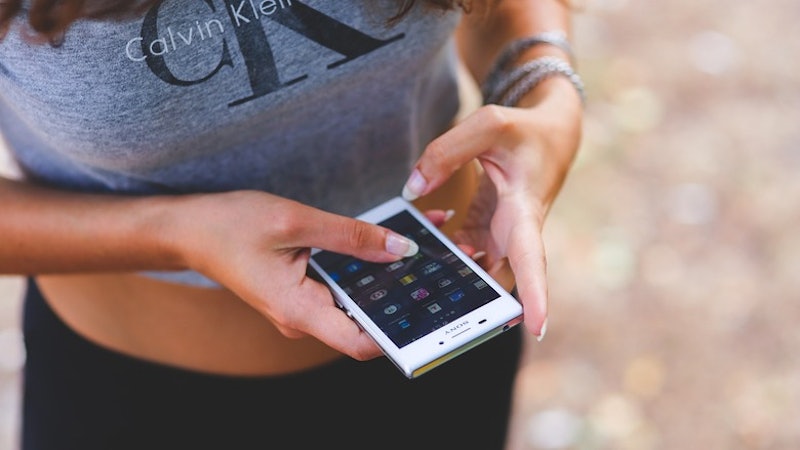 I recently interviewed couples who met online about what made them first message their significant others, from quirky fashion choices to common intellectual pursuits. With a better idea of what makes people say "HECK YES" to someone on a dating site or app, I became curious: What are the biggest turn-offs in online dating profiles? What do people see in profiles or messages that make them think "NOPE"?

I've certainly experienced the "NOPE" myself due to very specific lines in profiles, including "you should message me if you're more feminine than feminist" (you're gross and you don't understand feminism) and "I like to wear nice clothes and drive a nice car" (so do we all, but if that's important enough to go on your profile, we'll both disappoint each other). I've also, like the majority of OKCupid users, seen most people I message give me a "NOPE" by not responding, and I've wondered if there's anything I can do to change that.

Well, the sources of the "NOPE"s have spoken, and they've come up with some very specific things you should not put in your profiles or messages if you want to be messaged back. Actually, to come to think of it, the worst offenders on this list should probably keep doing what they're doing to save us all the displeasure of exchanging messages with them. Please and thank you.

1. Anything related to hunting and/or fishing

Take it from Michelle, 29: "If someone posts a photograph of themselves shooting a gun in an online dating profile, my first thought is...'the better to shoot me with?' Deal breaker."

Guys on Hinge, I'm looking at you. When we see you playing beer pong with your friend Tyler in a cap with your favorite sports team's logo, we think "frat boy," and not in a good way. Jessica, 24, steers clear of "anything super bro-culture-y." And when those bros multiply... "the Where's Waldo photographs HAVE TO STOP. Especially if in every photo, the dude in question is standing next to three other identical bros," said Michelle.

3. Strict criteria for who need apply

"One of my pet peeves is 'I want a woman who has her life together.' What does that even mean? Do *you* have your life together? I'm divorced, does that mean I shouldn't apply? Never mind, didn't like you anyway," complained Liana, 34. Another term with a nebulous meaning is "confidence." Vidya, 34, wonders when she sees someone looking for a woman with confidence:

"Are there a whole bunch of women walking around being nothing but a complete bundle of nerves, afraid to open their mouths, try new activities or anything?... Do they mean some kind of overt sexual confidence mostly seen in movies and rarely replicated in real life because well, real life?... They are looking for someone like Catwoman or the Tombraider gal."

Fun fact: I had to search through my OKCupid "enemies" to find a profile that requests a woman with confidence.

3. Descriptions of who need not apply

Actually, I pretty much agree with this person's "I spend a lot of time thinking about" list, but putting it all out there on a profile comes off snobby, so don't copy and paste this article into your profile. "Providing a long laundry list of what they DON'T want in a date when they're not exactly God's gift" is a no-no, said Ann, 29.

Maddy, 23, has noticed two correlations with guys who describe what they don't want: "It almost always gets offensive and sexist. And they almost always are wearing a fedora in at least one picture."

"I loathed profiles with those MySpace angle pics. Arm up to the side, duck face mouth.... Nope, pass," said Andy, 27. Shirtless selfies sparked particular criticism. It's not that we don't appreciate your six-pack, but showing it off to every stranger who views your profile gives the impression that you're looking for either a hookup or a very superficial relationship — and, once again, invokes the bro stereotype: "Usually these belong to bro guys who aren't very deep," said Martha, 23.

But according to Liana, the winner of the unwanted selfie award is "crotch selfies, especially if they're angling the phone over their head." And save the nudity for the bedroom: "I'm all for a body-shame-free society, but something tells me that I just don't want to date the kind of man who has a picture of him streaking on his Tinder profile," said Jessica.

A few people felt strongly that saying you "don't take yourself too seriously" or are looking for someone who "doesn't take herself too seriously" is a turnoff. "People who use the terms in their profiles 'love to laugh' or 'don't take life too seriously' are just not going to be a match for me," said Vanessa, 47. Laura, 36, echoed this sentiment:

"I noticed a lot of guys on online dating profiles say they want a woman (actually, they usually say "girl" a lot, which also is a bit annoying), who "doesn't take herself too seriously." I see this A LOT (or similar things). Because God forbid a woman take herself seriously."

6. References to the gym

It may not be necessary to scrap these depending on who you're looking to attract, but be warned, they attract a very specific type of person. Several people told me they wouldn't go for someone who describes themselves as a "gym rat" because they wouldn't be able to relate or would feel out of shape in comparison. If you're looking for another gym rat, great; if you just mentioned the gym on your profile to appear like you take good care of yourself, it's not working.

7. Messages that apologize for their existence

One 29-year-old man said he got a message saying "I don't want to sound like a whore but would you want to go out some time?" Yikes. When a message apologizes for its very existence, "I can already imagine the awkward, self-conscious date," said Marlen, 26.

8. Messages that need a parental advisory

"The guy who wrote me this message (here in full): 'Can you cook?'" did not receive a response, said Betsy, 39. If you're the one messaging someone, why should they need to prove themselves to you?

"You and your XBox? Have you given up on people? Are you looking for a femmedroid?" writes Alyssa, 42, in this hilarious Dating Mommies post that includes the above picture. In addition, "any form of transportation in a profile photo" is a deal breaker for Carol: "If your car, boat, motorcycle, etc. is that important to you, we're not on the same page." Jason*, 27, also said materialism comes off in photos, especially when someone has the "same dresses, designer brands, and hair as all her friends."

How About We just became "How about not?" We may be tempted to click "I'm intrigued," but not for the right reasons.