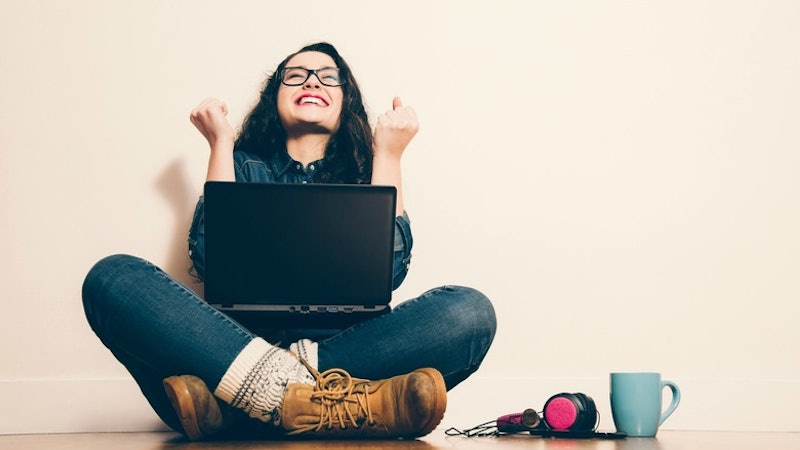 According to sociologist Eric Klinenberg and his unlikely research collaborator Aziz Ansari, studies show that we have no idea what to look for in an online dating profile. The traits we say we're looking for don't always appeal to us in reality, and we often end up happy with people who don't match our criteria — particularly when one of our main criteria is good looks. For example, when people met through the OKCupid app Crazy Blind Date, which uses blurred photos, they had a good time on their dates despite not knowing what anyone looked like in advance, prompting OKCupid co-founder Christian Rudder to conclude that "people appear to be heavily preselecting online for something that, once they sit down in person, doesn’t seem important to them.”

What should we be looking for, then? I figured the best people to answer this question would be couples who met online and stood the test of time — because just as every life started with an egg and a sperm, every online relationship began with a profile that stood out and a message that inspired a response. So, I asked 10 people who met their significant others online what part of that first profile or message got the ball rolling. In addition to revealing what you should keep an eye out for when browsing profiles, these answers can clue you in to how to get your love interests' attention.

In the interest of helping you optimize your profile and messages and vet the ones you come across, here are some qualities of online personas that launched relationships.

"My fiance read on my profile about how I worked on ecofeminism, so in his message he said he had studied anchoritic feminism. I was sold by both his feminism and his vocabulary."-Kaitlin, 32

"My wife messaged me about Dr. Who, so it was pretty laid back. I had it on my profile. Back before Matt Smith, when the show was still good" -Andy, 27

3. A Good Heart And Sense Of Humor

"I loved the fact that my wife was employed, worked in the helping professions, and had a sense of humor."-Vicki, 56

"I was studying abroad in Oxford at the time, and my boyfriend happened to be passing through town on his way to Aylesbury, and we both swiped right on Tinder. He sent me a message saying he liked my lip piercings, and being abroad without much care for serious relationships, I responded casually with, 'Thanks, I did them myself,' which always is a conversation starter. We met up the following day on his way back to Bath and hit it off."- Vanesa, 23

5. Passion And Intellect ... At Least At First

"In his profile, my ex-boyfriend seemed very passionate and intellectual, and I sent him a message saying that I thought we could have great adventures together. But I think it's important to note that by three months later, he appeared to me as the opposite of how he presented himself in the beginning: boring, childish, and rude."-Hannah, 24

"My boyfriend was cute and smart and original and didn't seem at all douchey... He mentioned he's partial to Fluevog shoes (as am I) so I just sent the one line, 'Dudes in Vogs are sexy as fuck.' And then we had the best first date ever a couple weeks after."-Anonymous, 47

7. A Profile That Doubles As Reading Material

"My girlfriend's profile was cool as hell. She had all these hilarious, inventive one-liners everywhere that didn't relate to the questions at all. It seemed more like flash fiction."-Peter, 26

"I first messaged my fiance because of her love of literature."-Aidan, 28

9. Optimization For Match.com's Algorithms (But Don't Ask Me How To Achieve That)

"I was using Match.com, and my girlfriend kept on coming up in those Top 5 Daily Match things, and when I viewed her pictures and read her bio she just seemed like someone I could get along with. I didn't necessarily expect to have much success, but I sent the first message anyway and was happy and excited when she responded with interest."-Tim, 25

"I wanted to be more brave. I challenged myself to message the hottest girl within 100 miles on OKCupid. I thought it would make a funny rejection story for my blog. I asked her if she wanted to get to know each other and she said 'sure.' Now, a year later, we are getting married."-Teresa, 34

I wonder what Aziz Ansari would say about that last one. Images: Fotolia, Giphy(7), Natalie Barratt, Carlos Pacheco , bixentro/Flickr