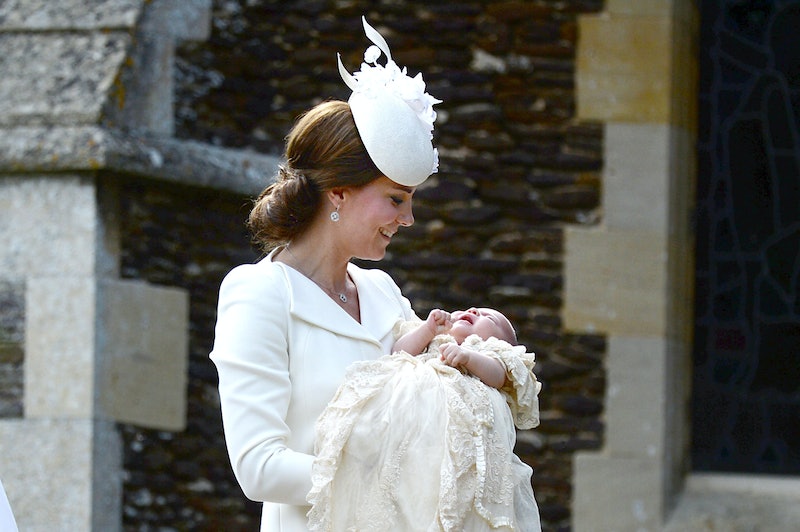 At Princess Charlotte's christening on July 5th, Duchess of Cambridge Kate Middleton wore a cream coat dress that was basically calling to mind everything you think of when the phrase "royal christening" is uttered. She looked stunning in the elegant, almost tuxedo dress-like piece, and it's not the first time she's worn an Alexander McQueen gem to a royal baptism. Middleton also wore the same designer at Prince George's christening in 2013, arguably crafting herself a tradition by sporting the late British designer's garms at some of the most important, media-heavy events of her family's life.

I must say, the cream hue of the coat dress worked brilliantly against Princess Charlotte's christening gown — the same gown worn by her brother Prince George at his own baptism. The family was beautifully matched together, with Prince George getting lots of attention in his red shorts — a welcome pop of color from the family's neutral ensembles today.

The color and style of the dress Middleton wore aren't new trends for the Duchess, however. Middleton has been seen rocking cream on a number of occasions. Here are just five other times she looked just as lovely in this hue, proving neutrals are classic, but never boring.

Just about everything from Princess Charlotte's christening — from her mom's dress to her own gown — looks the same as George's ceremony two years ago. Middleton's cream dress here, however, had a distinctly yellowish tint, and those ruffles? Well, they're on point.

Back before the Duchess was actually the Duchess, she attended her fiancé's cousin's wedding, Zara Phillips, in this cream getup.

This time she wore a cute cream and black polka dot dress from Topshop on a 2013 visit to Hogwarts.

Back in 2012, at the Queen's 60th anniversary of, well, being the Queen of England, Kate wears a sweet spring number. Now, where can I get those wedges?