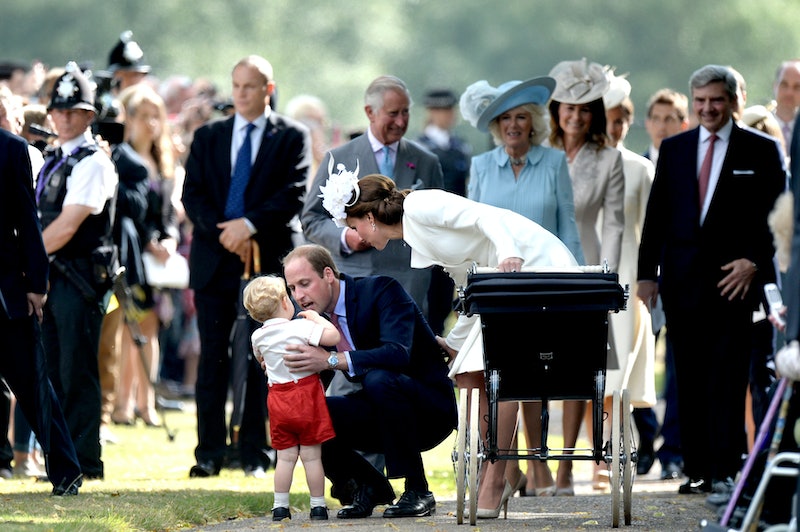 Although for some people, myself included, any event regarding the members of the British royal family is reason for excitement, plenty of others don't get what the fuss is all about. "What's the big deal about a toddler wearing socks?" They argue. Or, as I'm sure many people are muttering today, "Princess Charlotte was christened. So what?" It's a common sentiment (albeit a WRONG one, in my humble opinion), but apparently, it's not only shared by eye-rolling Americans. It seems that none other than a member of the royal family is over the scene as well, as at his sister's christening on July 5, 2-year-old Prince George was reportedly seen refusing to go into the church.

According to the Mirror, George, while walking with his parents and baby sister towards the church where Charlotte would soon get baptized, had second thoughts about attending the service. The website reports that he was spotted refusing to enter the church, and that it took a talking-to by his father, Prince William, in order for him to agree. Eventually, of course, the whole family proceeded into the church, and the ceremony was seemingly completed without any additional drama.

Yet judging by his actions pre-christening, George must've not been a happy camper. Do you blame him? If you're a two-year-old who typically spends your days playing with your dog and sticking your tongue out at strangers, having to parade past thousands of people into a stuffy old church to watch your attention-stealing baby sister steal even more of your attention would be the absolute worst. Honestly, I'm proud of George for displaying the restraint he did, because if I were in his shoes, I probably would've thrown a total fit and strolled right back over to the car.

Although there's no way to know exactly when the mini-tantrum occurred, a few photos released from the event seem to give a pretty good hint at how exactly it all went down. Here's George and Will (alongside Grandma), who appear to be about to embark on a very serious conversation:

A closer photo of the intimate discussion:

And then here's Will and George walking, with the toddler not looking too thrilled:

Seriously, this kid is not happy:

But although he definitely contemplated running away:

He reminded himself that his sister wasn't that bad:

And he decided that it was worth it to stick around.

Good decision-making, George. Being a prince may be challenging, but having a good reputation as a royal matters, and no one wants to be a quitter.

More like this
Prince George Made The Cheekiest Comment About Prince William
By Sam Ramsden
Hailey Bieber Just Responded To *That* Viral Met Gala Moment
By Radhika Menon and Sam Ramsden
Dixie D’Amelio & Noah Beck “Love Each Other” Despite Breakup Rumors
By Julia Emmanuele, Jordyn Tilchen and Grace Wehniainen
Khloé Kardashian Is Reportedly Dating A Private Equity Investor She Met Through Kim
By Jordyn Tilchen and Jake Viswanath
Get Even More From Bustle — Sign Up For The Newsletter