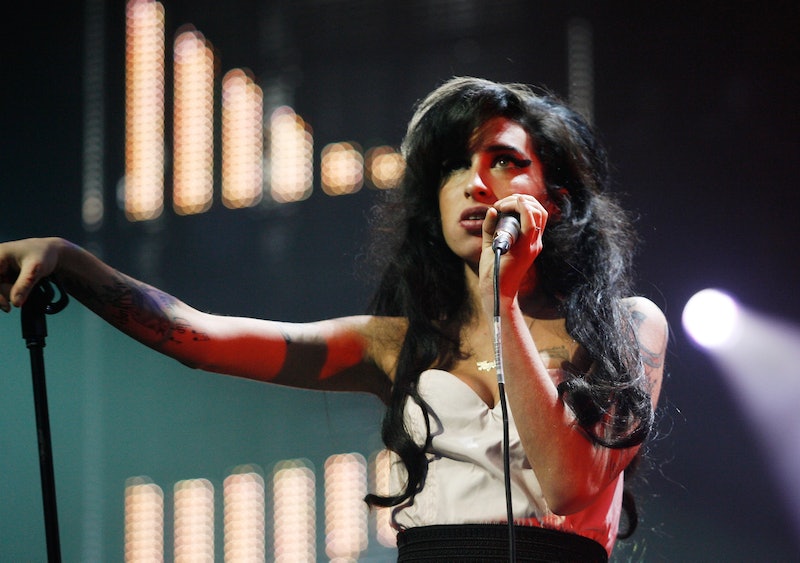 It's not exactly your typical summer blockbuster — people don't tend to grab all their friends and bags of popcorn to see tear-jerking documentaries — but Amy, the new film about the life and death of musician Amy Winehouse, has quickly become one of the most talked-about movies of the season. Directed by Asif Kapadia, the film, released Jul 3, has garnered raves from critics for its nuanced depiction of the beloved singer, and the heartbreaking trailer alone is reason enough to break into tears. Like many documentaries, however, Amy opened in limited release, and many people aren't yet able to see the film for themselves. If you're asking yourself, where can I watch Amy ?, here's the info you need to watch one of this summer's biggest must-sees.

Currently, Amy is playing only in select theaters across the country (although if you live in the U.K., you have many more options; Amy is a British-made movie). It's playing in New York City, Los Angeles, Chicago and more major cities, but hasn't yet made its way to smaller U.S. towns. On Jul 10, however, the movie plans to expand to many more locations, so be sure to check your local theater to see if Amy is playing nearby.

But if you don't live near a theater that happens to be showing the movie? You might have to wait a bit longer to check it out. At the moment, Amy isn't available to watch online via Amazon Instant Play or Hulu, and if it does ever come to Netflix, it likely won't be until after the film's DVD release date. It's disappointing news, but it certainly doesn't mean you have to be completely out of the loop when it comes to reminiscing on the legendary Amy Winehouse. Until you get to see Amy, here are six other ways to revisit the singer's tragic but incredible life:

Although this 2011 documentary didn't garner the same praise that Amy has, it's described as giving "an intimate look" into Winehouse's life, covering everything from her rise to fame to her struggles with addiction. It's available to watch on Amazon and iTunes.

2. Listen To All Her Albums

Due to her untimely death, Winehouse only ever released two studio albums, but they're worth a thousand repeat listens. Remember her incredible voice by revisiting now-legendary songs like "Rehab," "Back to Black," and "Tears Dry On Their Own."

Yet another movie about the singer's life, this one, released in 2012, takes a very different approach: recreating it with a cast and script. The fictional film is closely inspired by Winehouse, but uses actors to re-enact events.

4. Donate To The Amy Winehouse Foundation

What better way to pay tribute to the singer's legacy than by contributing to the charity named in her honor? The foundation, started by Winehouse's family in 2011, works to prevent substance abuse and provide support to disadvantaged youth.

5. Rewatch Her Grammy Win For Record Of The Year

It's impossible not to be moved watching an absolutely stunned Winehouse accept the Grammy award for "Rehab." She deserved the win (one of five that night, plus a nomination for Album of the Year), and seeing her process it all is hugely emotional.

In 2012, Winehouse's father, Mitch, wrote this part-memoir, part-biography about his late daughter. Reviews were largely positive, with critics praising Mitch's candor about even the darkest elements of Amy's too-short life.

There are many ways to get a sense of Winehouse's life before Amy comes around, but be sure to check out the film when it does arrive in a theater near you; this documentary is a definite must-see.