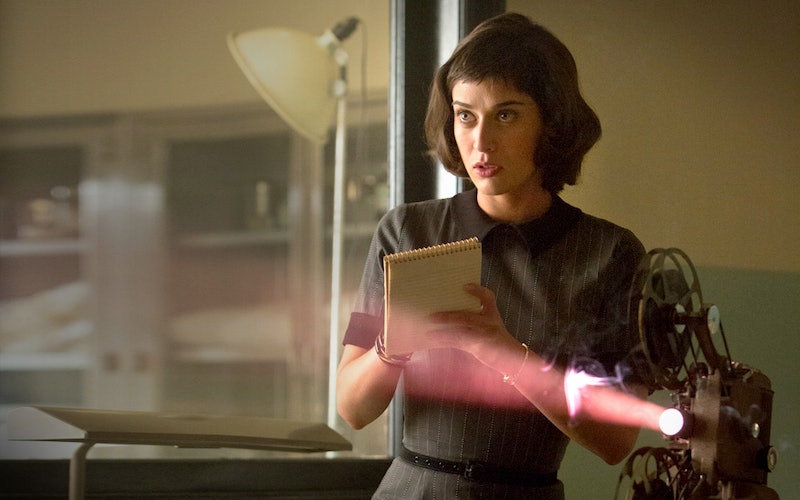 When did Masters of Sex get so good? In one of the best single hours of television this season, the show tackled religion, infidelity (physical as well as emotional), longing, and, of course, sex. Oh, and did I forget to mention that a lot of really pretty girls were naked? If you aren't watching Master of Sex, you should start. (In case you didn't get the memo the first time.)

Masters and Johnson's sexual experiments continued and after one, Johnson left scratches on Masters' shoulder. Clearly, he had to cover that up for Libby. Then, Masters did the seemingly impossible: He made a joke. "One might consider this positive feedback," he said about the scratches.

After Vivian saw a man with foreskin (via her nursing job), claiming it looked like an "anteater," Haas revealed that his parents are Jewish.

Vivian freaked out, which means that he hadn't told her about his background. She even tried to go to an Orthodox Jewish temple (and gets kicked out, because of the church's rules). Unsurprisingly, tears ensued.

An elderly man in a hospital bed told Ethan he can't just float through life. This led to Ethan saying, "I should care about something."

"You picked me," Vivian said.

"No, Viv. You picked me," he said. More tears ensue. Break up. No discussion on who gets the ring.

Jane was the first victim. "Whenever possible, I want to be shot from the right," she said.

What can science really add to our understanding of sex?

Masters's mother wanted to know what Masters does. And after downing a beverage, Masters told her: He watches people "fornicate." "Were you hoping to shock me? Well you can't, not about sex … your father, had tremendous sexual appetites," she said.

Libby told Masters that she's pregnant. He knows she went behind his back. In the fight that ensues, poor put-upon Libby said, "Nothing truly matters in this world."

And, at the end of the episode, after calling the sex study "my study," and not Virginia's, Masters handed Jane a pile of money for her participation. He said he has done harm.

When will Johnson and Masters get together?

Yes, sure, they've had sex. But although they've already been banging (in the name of science, of course), when will they actually be "together"?

Maybe soon. After all, Masters revealed in his review of Johnson: "She has become absolutely invaluable to me." Even Masters' mother notices it, telling her son she knows there's something going on between Johnson and Masters. She's good at determining these things: Masters' father did cheat on her with the secretary.

More like this
What Makes A Sally Rooney Sex Scene So Hot?
By Samantha Leach
Long Live Bennifer!
By Allie Jones
'Love Island’s Biggest Draw Is Still FOMO
By Chanté Joseph
Sandra Bullock, Girlboss Extraordinaire
By Matt Harkins & Viviana Olen
Get Even More From Bustle — Sign Up For The Newsletter