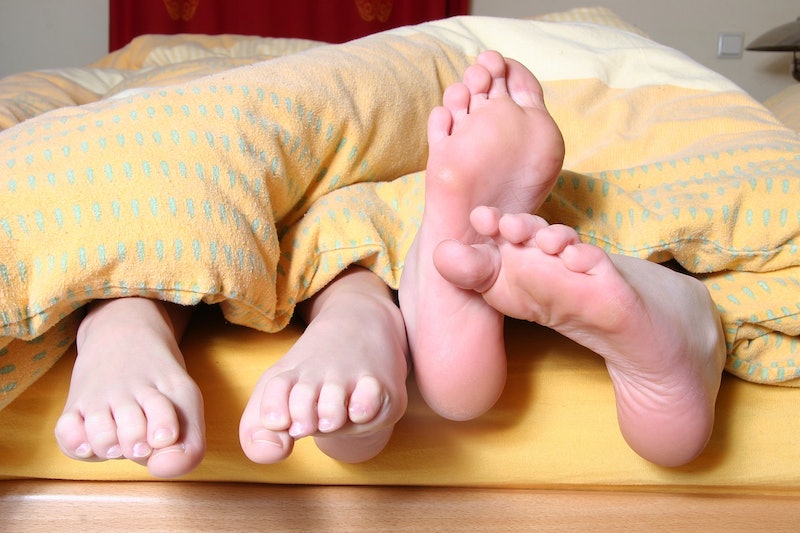 I make no secret of the fact that I am a huge nerd about a variety of topics. So when I say that “Nerds have better sex than other people,” I don’t actually know if that’s true, because I’ve never been other people. But I can say that nerds certainly have great sex, and I’m not the only one who thinks so. Stereotypes that nerds are hopelessly awkward people who never get laid are simply untrue. In fact, a 2011 study focusing on lady gamers showed that nerdy women actually have a lot of sex, and have high rates of being in serious relationships. In fact, I think it’s the very nerdiness of nerds that can make them great in the sack.

To be clear, when I use the word “nerd,” I’m not referring to stereotypes of sci-fi-obsessed dudes with inch-thick glasses, pocket protectors, and an inability to talk to women. Not that there’s anything wrong with sci-fi-loving guys who wear glasses (I happen to be married to one), but that stereotype is old and limiting. To me, being a nerd means being so fascinated by a topic that you are willing to analyze it endlessly. This topic isn’t your job, and it isn’t necessarily “important” in the broad scheme of things, but you are so captivated by it that you want to pick it apart, remake it, rethink it, ask questions about it, learn everything about it, and generally let it occupy an unnecessarily large part of your brain. There are science nerds, of course, but there are also book nerds, gaming nerds, history nerds, music nerds, sports nerds, fashion nerds, theater nerds, classic movie nerds, romance novel nerds, and pretty much any other type of “[insert topic here] nerd” you can think of. Nerdiness is more about how you love something than what you love.

The qualities that make someone a nerd — intense focus, imagination — can be applied in other walks of life, including, of course, the bedroom. Here are just a few ways that nerds make sex awesome:

1. When nerds are into something, they are INTO it. (Especially when what they’re into is you.) (OK, I know, that was horrible. But I couldn’t NOT make that joke, people.)

Nerdom is defined by an intense focus on a particular idea or topic; the kind of focus that lets a nerd stay up all night debating which translation of the Iliad is the best or spend a Saturday mapping out the schematics of Firefly’s Serenity. When a nerd turns that focus on a sexual partner, things are bound to get good.

Nerds tend to be very analytical people who like to break ideas down and see how things work. Sex can be a complicated thing, so having someone who is willing to take the time to analyze your body and find all the right buttons to push is worth keeping around (and tied to your bed, if that’s your thing).

Sometimes, developing a good sexual rapport with someone takes a bit of experimentation. A nerd isn’t going to freak out if it takes a few tries to get things right. Instead, he or she will see each try as an important data-gathering mission. By the same token, nerds are also not afraid to try new things when it comes to sex — after all, even if the new thing isn’t successful, it’s still teaches them something, right?

4. Nerds are hard to shock.

5. Cosplay isn’t just for Comic-Con, if you know what I mean (and I think you do).

The reason that most nerds are obsessed with whatever it is they’re obsessed with is that they have really active imaginations, and this interest, for whatever reason, taps into that. When people become obsessed with historical reenactment or making fan art or collecting memorabilia, it’s because those activities appeal to their own sense of creativity. When it comes to sex, that ability to imagine is all to the good, not just because it allows for elaborate fantasies, but also because being imaginative is linked to empathy. It’s the core faculty of being able to understand what someone else is experiencing. And that’s essential not only in a sexual partner, but in a life partner.

7. You’ll always have something to talk about when the sex is over.

When you’re sleeping with a nerd, there’s no need for post-coital conversation to be awkward. You just go right back to talking about whatever your were talking about before, whether it’s debating the relative merits of each Avenger, discussing the latest WWII documentary you're obsessed with, or whatever else floats your nerdy boat.

More like this
What Mercury Retrograde Spring 2022 Means For Your Sign's Sex Life
By Nina Kahn
I'm 42 & I've Never Had Sex. Is It Too Late?
By Sophia Benoit
Help! My Partner Only Wants Sex Late At Night & Won’t Compromise
By Sophia Benoit
Meet The Disney Imagineer Bringing 'Guardians Of The Galaxy' To Epcot
By Charlie Mock
Get Even More From Bustle — Sign Up For The Newsletter