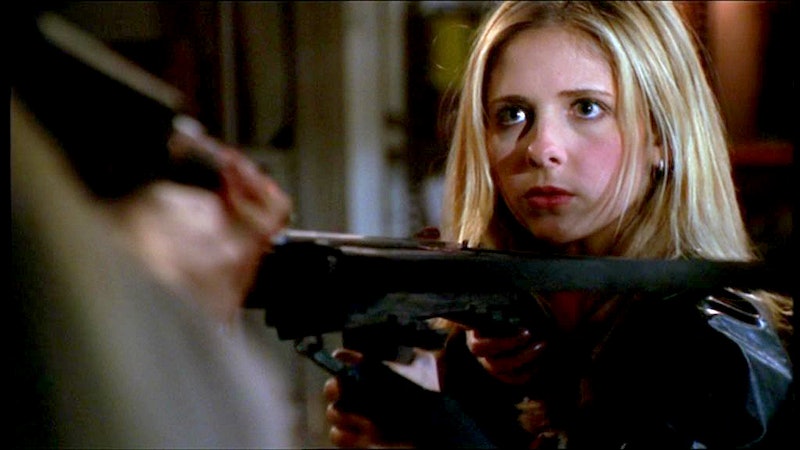 Joss Whedon has famously said that, when he is asked (as he always, always is) about why he writes strong female characters, his response is “Because you’re still asking me that question.” Whedon is known for creating female characters who quite literally kick ass (See: Buffy Summers, River Tam, Echo, Zoe Washburne), but it’s important to realize that “strength” in this context doesn’t have to be physical; a “strong” character need only be a good one: well-rounded, realistic, and multidimensional. What I really love about Whedon’s characters—and what I think makes these women so compelling on screen—is that they do not exist in stasis. His characters, both male and female, change over time, just like real people do, so that our investment in them is not rooted simply in a handful of concrete personality traits, but in their distinct, transformative emotional journeys. Whedon’s commitment to creating female characters who are more than mere eye candy has made Whedon something of a cult figure; people who love his shows tend to be lifelong devotees. Because I am unabashedly one of them, I’m ranking Whedon’s top eight female characters, on a scale from “really amazing” to “OMG I love you.”

In making this list, I’m sticking to Whedon’s original characters only. Sorry, Black Widow. You know I love you. And if you notice that Buffy the Vampire Slayer and Firefly are perhaps overrepresented in this ranking—well, I never claimed to be unbiased, did I?

The world in which Firefly takes place is not a friendly one, and yet mechanic Kaylee Frye, played by Jewel Staite, manages to be the sunniest, sweetest character in the Whedon universe. Kaylee could easily tip from “endearingly sweet” to “annoyingly saccharine,” but Staite manages to find just the right balance of optimism and reality. Kaylee may be sweet, but she’s not innocent; one of my favorite aspects of her character is her completely frank attitude about sex and her own sexual desires. She is peak "owning your sexuality without being defined by it." Plus, she is an unquestioningly respected mechanic like it ain't even a thing.

Adelle DeWitt is one of the most morally grey characters in the Whedon canon. Perhaps unsurprisingly, she is also one of the most fascinating. Adelle, played by Olivia Williams, does some terrible things in Dollhouse, and yet she remains a sympathetic character. As an audience, we watch as she struggles between her sense of self-preservation and her sense of obligation to the “dolls” in her charge. She doesn’t always make the best decisions, but watching her make them is good TV.

River Tam embodies the central mystery that drives both Firefly and Serenity. Beautifully played by Summer Glau, River is an elusive, strange, but ultimately sympathetic young woman, whom we can only root for as she slowly, painfully claws her way back to sanity. And, come on, her fight scenes in Serenity? Incredible.

Anya, a vengeance demon-turned high school student played by Emma Caulfield, is consistently one of the funniest characters on BTVS. She is hilariously, brutally honest, and yet somehow manages to be vulnerable and extremely likable. She also really, really hates bunnies.

Cordelia Chase, played by Charisma Carpenter, starts out in BTVS as the standard high school “mean girl”: She’s hot, superficial, cruel, and not very bright. As the show progesses, however, Cordelia becomes more than a stereotype; we discover that, underneath the snark, Cordelia is smart and even compassionate. By the time she becomes one of the main players on Angel, she's a character we all root for.

A lot of Whedon’s best female characters are young, and throughout his shows, we watch teenagers like Buffy's Willow and Firefly's River Tam grow up and struggle to figure out who they are. One thing I love about Zoe (played by Gina Torres) is that she is a fully-fledged, take-no-prisoners, grown-ass woman. By the time we meet Zoe in Firefly, she has already been through hell, and come out the other side. She knows herself, and she knows what she wants from life. Zoe’s character only drives home how rare it is to see a woman on television who has her life together: one who is self-possessed, confident, and capable of a mature romantic relationship. The fact that she can kick serious butt only makes her that much better.

Willow changes more than any other character over the course of BTVS. She begins the show as a sweet, innocent child, and ends as a powerful adult witch, who has suffered the death of her lover, an addiction to magic, and—oh yeah—that time she almost destroyed the world. Alyson Hannigan handles Willow’s transformation from naïve to mature (and honestly sort of scary) with aplomb.

Who else could top this list but Buffy Summers, the Vampire Slayer herself? At the beginning of BTVS, Buffy (played marvelously by Sarah Michelle Gellar) is essentially a thought experiment: What would happen if a ditzy high school girl became a vampire hunter? But throughout BTVS’s seven seasons, Buffy becomes one of the most complex, interesting characters on television. Buffy may be a supernaturally gifted ass-kicker, but she is also profoundly human, dealing with challenges and tragedies in ways that are recognizable and emotionally resonant. Love.