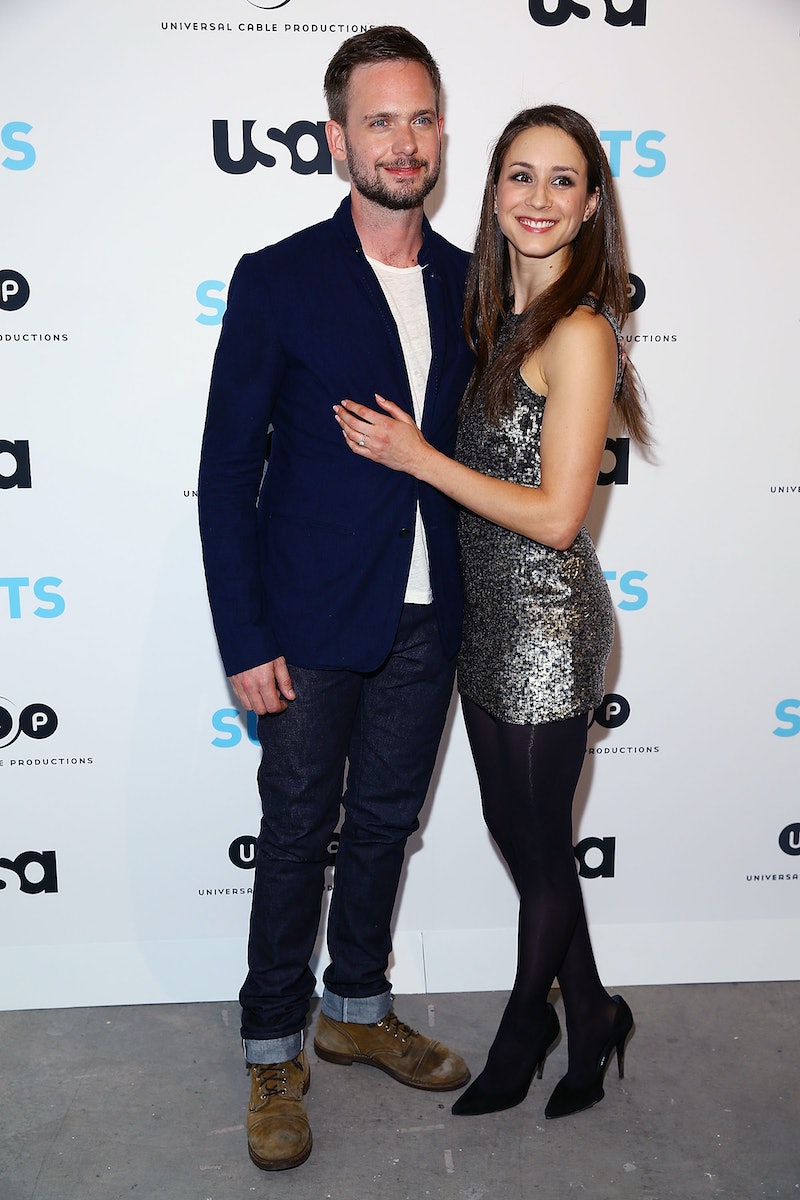 If it feels like forever since Pretty Little Liars star Troian Bellisario got engaged to Patrick J. Adams, that's because it has. It's been more than a year since Patrick popped the question during a romantic Valentine's Day trip to Paris, and since then ... radio silence. No wedding plans announced, no hints that Bellisario might be dress shopping, nada. This isn't too surprising, considering the fact that Bellisario's always been relatively private about her love life, but that doesn't mean I'm not super curious about when this shindig is actually happening. The couple still seems pretty happy together, so you'd assume they'd want to be married as soon as possible. So when are Bellisario and Adams getting married? Unfortunately, it sounds like it could be a while.

Because no matter how in love you are, there are still things you have to do, like go to work, and for these two, there's a lot of that in their lives. Between two different TV shooting schedules, with Bellisario on PLL and Adams on Suits, they've got a lot of conflicts going on. And they're also busy with other projects, too. Most recently, Bellisario played Juliet in Still a Rose, a LGBTQ retelling of Shakespeare's classic Romeo and Juliet, so it's not like they're just putting off wedding planning for fun.

And although neither of them have spoken about their upcoming nuptials recently, at the end of last year, Bellisario summed up the delay like this:

We're shooting two television shows so we're pretty busy. Right now my plan is to sleep. Both of our plans is just to sleep for a very long time. We also have a lot of other stuff in our careers that we need to be focusing on. Right now, I'm just excited to be in the same city.

Sounds reasonable! It'd probably make sense that the wedding would take place during a break in filming, too — maybe during the summer. Guys, it's totally possible that Bellisario has a wedding planned for, like, next week and we have no idea. Could you imagine?! That's super exciting to think about.

She's also gotten pretty sassy about when her wedding will be in the past, especially when fans questioned her about it on Twitter last year. I have a serious feeling that her wedding is going to be a total surprise, because she doesn't seem like she wants to make a big deal of it (or, you know, involve total strangers) at all.

And as for her other half? Adams takes a way more lax approach, and when he was asked about the wedding last month, he simply replied that he's going to have the good people of Suits plan it for him. Not a bad idea!

And no matter when they decide to tie the knot, there's one thing I know for sure: Bellisario is going to look amazing and their wedding will be beautiful. Seriously, how cute are these two?