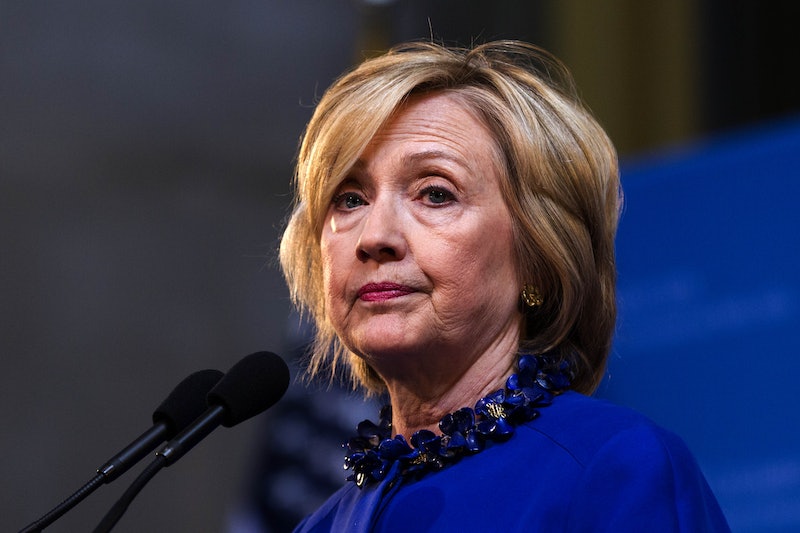 As fans count down the minutes to Hillary Clinton's first national interview since announcing her campaign, they can confidently look forward to some fierce quotes and "drop the mic" moments from the Democratic front-runner. Throughout the years, Clinton has handled interviews with the grace and mastery of a verbal samurai. Even when she's hit with the more hard-hitting, uncomfortable questions, Clinton doesn't flinch. In fact, she's shown on many occasions that when faced with a question designed to make her stumble, she's still the boss. CNN political correspondent Brianna Keilar better be prepared to be reminded.

Though she's been facing criticism for being too controlling and not transparent enough with the media, when Clinton does sit down for an interview, she's not afraid to lay it all bare. In her first national interview since kicking off her presidential campaign, Clinton is expected to address some familiar nagging issues, like that private email she used in the State Department and the questionable ethics surrounding donations to the Clinton Foundation, and she might be pressed to show her fear of a quickly gaining Bernie Sanders. However, if her past interviews are any indication, don't hold your breath for her to crack.

Clinton's been interviewed by the most seasoned pros in the industry, from Diane Sawyer to Cynthia McFadden and even Bill O'Reilly, and she's always maintained her position in each and every sit-down. Here are seven times Hillary Clinton showed who's boss during an interview.

She Slayed A Question About Bowe Bergdahl

Last year, Diane Sawyer sat down with Hillary Clinton for an interview in which no questions were off limits, according to how it was advertised. While Sawyer did ask some hard questions, Clinton barely batted an eye.

Diane Sawyer: Did he [President Obama] make a deal with the devil in releasing those five Taliban?

Hillary Clinton: I think this was a very hard choice, which is why I think my book is so aptly named. If you look at what the factors were going into the decision, of course, there are competing interests and values. I mean, one of our values is, we bring everybody home off the battlefield the best we can. It doesn't matter how they ended up in a prisoner of war situation.

Clinton: It does not matter. We bring our people home.

She Turned An Insult Into A Hilarious Quip

In the same interview, Sawyer relayed the sexist joke that Mitch McConnell told, in which he said the Democratic field for 2016 looks like "a rerun of The Golden Girls." In response, Clinton brushed that dirt off her shoulders.

Sawyer: Mitch McConnell said at one point that 2016 will be the return of The Golden Girls.

Clinton: That was a very popular, long-running TV series.

She's Not Afraid To Get Cocky

In an interview with The Boston Globe in 2007, when asked whether she had to drop her baby-bond idea our of precaution for her campaign, Clinton responded:

I have a million ideas. The country can't afford them all.

Though it does make her sound like she has some serious swagger, it turned out that the quote paraphrased what she said and was taken out of context. This was her entire answer.

Ain't Nobody Got Time For That Nonsense

In a June 2014 interview with CBS's Jane Pauley, Clinton has a very blunt assessment of the 2016 presidential race.

It's not a contest, you know, [of] who looks good, and who can have a quick answer, and all the rest, who can get the most outside money. We don't have time for that right now.

She Has High Expectations For America

In 2013, Nightline's Cynthia McFadden interviewed Clinton over a three-part series, during which Senator John Kerry was confirmed as Secretary of State. When McFadden asked Clinton what advice she'd give him as his predecessor, she did not sugar-coat her answer.

I don't see how you do this job without traveling a lot. Condi Rice traveled a million miles, and I traveled nearly that and went to more countries than anybody has gone to. And why do we do that? Is it because we're glutton for punishment? No, because the United States has to show up. Nothing substitutes for demonstrating that the United States of America cares enough to be there, to be at that meeting, to represent our values.

Last June, following her interview with Sawyer, Clinton was grilled by Fox News about what is perhaps the most scrutinized moment in her career: the Benghazi attack. When Fox News' Bret Baier asked her what part of the attack she takes responsibility for, Clinton maturely owned up to her mistakes:

I took responsibility for being at the head of the state department at that time. Now, that doesn't mean that I made every decision because I obviously did not. But it does mean that I feel very deeply and very personally about the losses that we incurred. ... I'm not one who says there is danger — your responsibility is to get us out. No, my responsibility is to do the best job that I can leading a diverse group, relying on security professionals, so that we can be in the hard places to help make the hard choices.

She Has A Strong Sense Of Self, And She's Not Afraid To Express It

During her first presidential campaign, explosive anchor Bill O'Reilly sat down with Clinton and asked why she thinks people perceived her then-opponent Barack Obama as a nicer person. She fired back:

Well, I've been around a long time. I bear a lot of the scars, ideological and political battles, I stand up for what I believe in.