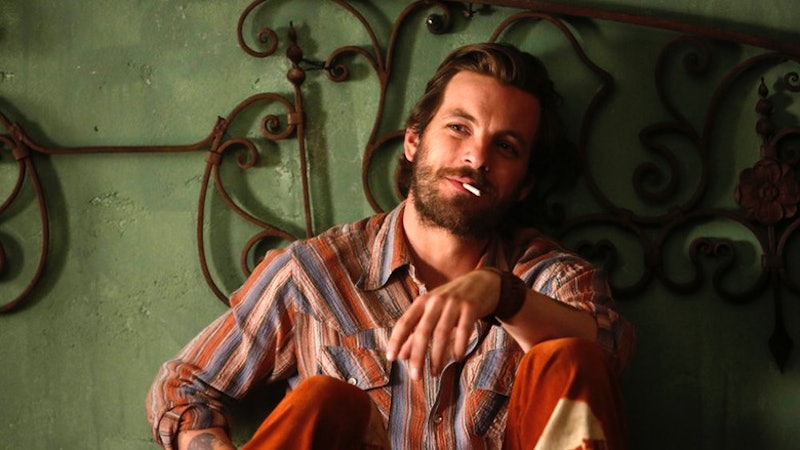 This summer's historical fiction hit series Aquarius is inspired by the real life events of 1967 — and Charles Manson isn't the only Aquarius character who is very real. The first member of the Manson family, Mary Brunner, returned to his commune mid-season pregnant with his child. Not only is "Mother Mary" real, but their child Valentine Michael Manson, who was born in April 1968, also exists in real life. So, what happened to Charles Manson's son in real life?

Fortunately for him, Valentine was sent to live with his maternal grandparents in Eau Claire, Wisconsin in 1970, shortly after the infamous Tate-LaBianca murders. After his mother was briefly jailed in 1969 (on a charge unrelated to the murders), her parents fought, and were granted, custody of the child. He credits his grandparents with giving him a wonderful upbringing and providing him with a normal and stable home despite his rough infancy living in the commune setup his parents were engaged in. He now goes by the name Michael Brunner and has largely stayed out of the public eye, but he agreed to an exclusive interview with KCBS in 1993. Although the full interview can be viewed below, here are the key facts we learned about Valentine from the rare appearance.

1. He Feels No Connection To His Biological Father

Although Brunner matter-of-factly acknowledges that people sometimes treat him differently because of who his father is, he makes clear that he feels no connection to Manson and has no interest in forming any sort of relationship with him. Brunner has received at least one letter from Manson, but he tore it up without reading it. When asked if he worries that genetics played a role in Manson's actions, Brunner's answer was a firm "no."

2. His Bond With His Grandparents Is Strong

Brunner was just 18 months old when he was sent to live with his grandparents, and he credits them for the person he is today. He considers moving in with them as the most important event of his life and described them as "the greatest people on earth." Brunner expressed his love and appreciation for them multiple times throughout the interview and he considers them his parents. His former teacher referred to Brunner's grandmother as a "hero," and this description seems fitting given the fact that she raised a well-adjusted young man under such difficult circumstances. Mary Brunner moved to Wisconsin after her release from prison, but their relationship was more like brother and sister.

At the time of this interview in 1993, Brunner and his long-term girlfriend had recently become the parents of a son. He was working as a parking valet and dreamed of starting his own business. He noted that his son's birth brought him and Mary Brunner closer together, but he didn't plan to tell his son about their biological relationship to Manson unless it became necessary.

Although little information about Brunner has become available since his interview with KCBS, he seemed like a strong young man with a bright future. Rather than focusing on the misfortune of having Charles Manson as his biological father, he chose to emphasize all the positive things in his life.

The full interview can be viewed below: