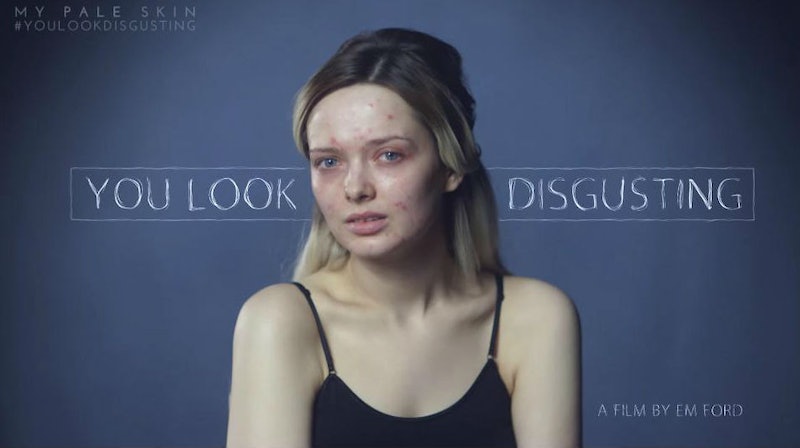 It seems as though, whether you embrace the power of makeup or choose to take your selfies cosmetic-free, you can't win. You're shamed if you do, shamed if you don’t. Beauty blogger Em Ford’s “You Look Disgusting” video has resonated with its eight million viewers so much that those who have been personally victimized by online bullying are telling their stories across social media in response.

It has become an online movement for women to expose the faces behind our cosmetic masks. If you search #MakeupFree and #NoFilter, you will find a slew of photos capturing women barefaced, while #PowerofMakeup will bring you a collection of faces with makeup only half done, proving that although women do not need makeup to be beautiful, they still enjoy and appreciate its enhancements.

Women are once again taking a stand against online bullying through the use of the hashtag #YouLookDisgusting in order to publicly share their stories.

It really is unfortunate to think that once anyone decides to post a selfie — barefaced or not — suddenly people, even complete strangers, believe they are entitled to voice their negative opinions. Once Ford began posting photos of her face, having struggled with severe acne for years, over 100,000 people responded to her appearance. Instead of offering words of encouragement, the majority focused on her insecurity, using it as a tool to bring her down.

During an interview with BBC Trending, Ford explained her reasoning behind the video:

"You Look Disgusting" is all about the comments that I received without makeup and the comments I received with makeup. I just wanted to bring awareness to the type of comments and how unrealistic the expectations are for what women and men need to look like today. The fact that if you don't wear makeup you're called ugly, you're told you don't put enough effort into your appearance. If you do wear makeup, you're told you're fake. I wanted to say, you know what? Perfection isn't real.

I can remember hearing once that perfection is a disease. It is something we strive to achieve, whether it be in terms of success or how we look in the mirror. We label certain body types — beauty looks, hair colors, eye colors, skin tones — as perfection. This inevitably causes a rift between those who look one way and those who look another.

These social media movements, including #YouLookDisgusting, are working towards silencing the negative voices once and for all, and encouraging women to see their natural beauty.

Check out the responses to "You Look Disgusting" below:

If you or someone you know has struggled with online bullying, know that you are beautiful, and never alone.