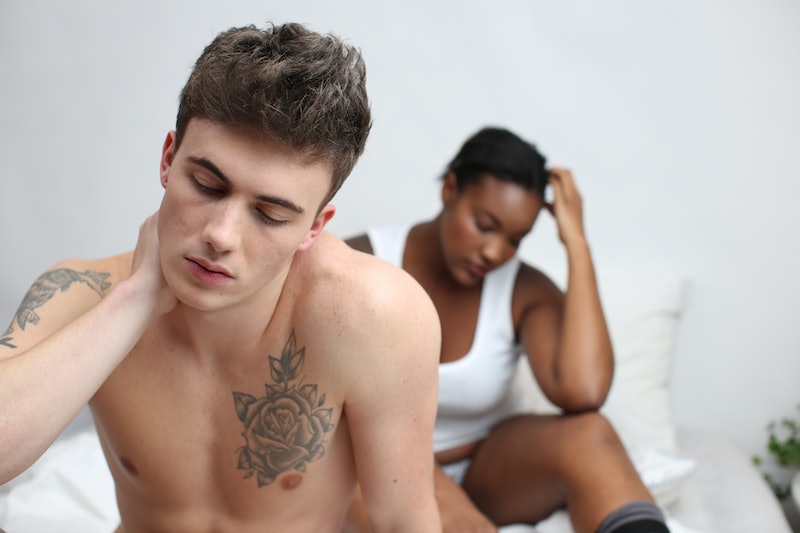 Abusing drugs like Ecstasy may greatly impact the ecstasy in the bedroom. According to the National Institutes of Health, about five percent of 40-year-old men and 15 to 25 percent of 65-year-old men experience erectile dysfunction (ED). A July 2013 study published in the Journal of Sexual Medicine even found that one in four men newly diagnosed with ED is under the 40-year-old mark. There are many factors that contribute to why a man can’t get it up such as poor health and lifestyle habits. Here’s another one to add to that list: illicit drug use. Obviously, right? A new study published in the Journal of Sexual Medicine has confirmed that the use of illicit drugs, specifically the use of amphetamines, may affect a man’s sex life.

Researchers examined 1,159 males who abused amphetamine or “speed” drugs. It was found that half of the participants believed that using the drugs had no impact on their sexual function. However, the other half reported that the drugs caused “erectile rigidity and sexual satisfaction, enhanced orgasmic intensity, and delayed ejaculation,” Science World Report reported.

Amphetamines are a group of drugs that trigger the central nervous system, and are most commonly used to treat conditions like ADHD, narcolepsy, and some forms of depression. However, when overused and abused, it can be both psychologically and physically addictive. The use of amphetamines can have short-term effects like increasing heart rates, suppressing appetites, bringing on a sense of happiness or euphoria, and making a person feel more alert, more in control, and more sociable. The long term effects include restlessness, insomnia, hallucinations, and aggressive behavior.

So, now we know that getting high in one area of life can lead to getting low in other areas. Here are five other things that can have an effect on erections.

Despite popular belief, sex and booze don’t really mix. According to Everyday Health, alcohol is a depressant. It can decrease sexual desire, it can cause difficulty in getting it up, it makes it harder for a man to get an erection and it's an overall mood buster. A 2007 University of Washington study even found that sober men were able to get erections more quickly than intoxicated men, and some men who were drinking couldn’t even get it up at all.

If you’re a smoker, kicking the habit may actually have Viagra-like effects to your penis. In a 2011 study published in the British Journal of Urology International, 65 sexually active male smokers who wanted to quit, first had their erections measured in a lab, and then were enrolled into an eight-week quit program involving nicotine patches and counseling. It was found that 31 percent of the men who had successfully quit smoking by the end of the study had wider, firmer erections and were able to hit the max level of sexual arousal much more quickly compared to those who relapsed. Furthermore, initially, 20 percent of the participants said they had ED at the beginning, by the end, 75 percent of those who had quit smoking reported that they no longer suffered from ED.

According to the AARP, drugs are one of the most common causes of sexual problems, and I'm not talking about the ones people do for fun. In fact, one in four cases of erectile dysfunction can be traced back to some kind of prescription drug. Medications like statins and fibrates, for example, which are used to treat high cholesterol, can interfere with the production of testosterone. Additionally, blood pressure medications can also decrease blood flow, which can reduce desire, and have a great effect on erections and ejaculations.

According to Healthline, stress, anxiety, and erectile dysfunction are like BFFs. They play off each other very well. Having high blood pressure as well as high cholesterol can increase a man’s risk for having sexual dysfunction. When a guy is highly stressed and highly anxious, his blood pressure can increase, thus making his level of sexual ability decrease. As Healthline points out, stress is harmful to the body and becomes a vicious damaging cycle. When a man has ED due to stress, it can further stress him out, which can also lead to more sexual dysfunction issues.

According to Everyday Health, erectile dysfunction has been found in over 60 percent of men with severe sleep apnea, in which a person stops breathing during sleep due to an obstruction in the airway of their nose, mouth, or throat. Due to the drop in oxygen, blood vessels lose the ability to regular blood flow to the penis, which of course is the basis for erectile dysfunction. Additionally, sleep apnea depresses testosterone production. However, if proper treatment is done, and people are getting the right amount of good sleep, they might find their sexual function issues go away.

More like this
What Mercury Retrograde Spring 2022 Means For Your Sign's Sex Life
By Nina Kahn
Help! My Partner Only Wants Sex Late At Night & Won’t Compromise
By Sophia Benoit
Ask A Sex Therapist: Is My Sex Fantasy Normal?
By Madison Malone Kircher
6 Abortion Advocates To Follow On TikTok
By Sara Youngblood Gregory
Get Even More From Bustle — Sign Up For The Newsletter