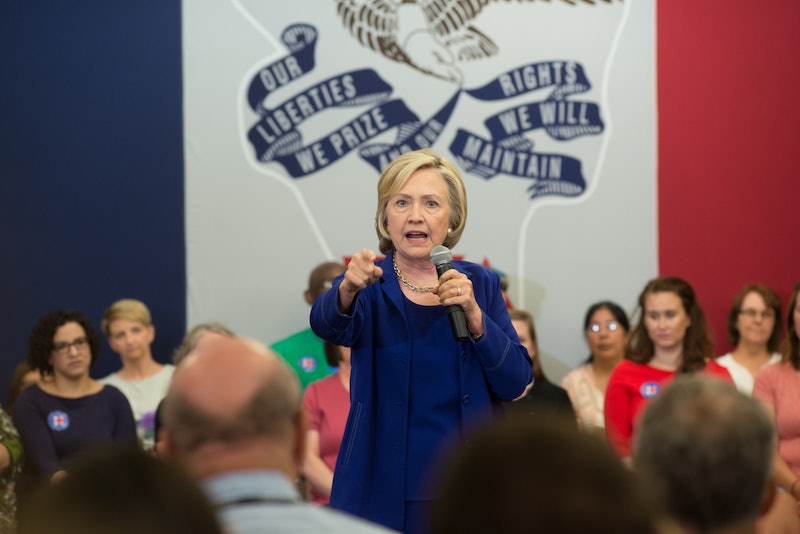 She may be doing well in the polls, but America doesn't seem to trust her — a problem that Hillary Clinton blames on the Republicans. During Tuesday's interview with CNN's Brianna Keilar, Clinton was pressed about a recent CNN poll that showed six out of 10 Americans don't find her trustworthy. Clinton's internal screaming was almost audible, before telling Keilar, "This has been a theme that has been used against me and my husband for many, many years. [We have been] subjected to the kind of constant barrage of attacks that are largely fomented by and coming from the right."

This is not the first time that Clinton has felt personally victimized by the GOP, and Tuesday's statement is very similar to her famous 1998 statement about a "vast, right-wing conspiracy" to bring down her husband. At the time, Clinton was referring to the onslaught of allegations against then-President Bill Clinton, including questions regarding sexual misconduct with White House intern Monica Lewinsky. Both Clinton and her husband denied and deflected the questions, instead blaming Republicans.

History has shown us that, at the time, the "right-wing conspiracy" in regards to Lewinsky was substantial. Which has led many potential voters to wonder if Clinton should so easily dismiss all public mistrust as right-wing fabricated, and as Keilar insinuated, eschew any personal responsibility for her bad reputation.

However, common sense dictates that if Clinton and her family truly were secretive harbingers of evil, at least some of it would have leaked out by now. For more than 25 years, the Clintons have been under a public microscope and relentlessly examined. They have provided innumerable amounts of personal and private information to the public, so that they can further prove their innocence against the unwilling attacks and accusations against them.

Since taking her position as first lady in the '90s, Clinton has become the center of a multitude of scandals and accusations, which allege that she:

There are, of course, more accusations and conspiracies surrounding Clinton, and while some may have legitimate roots, others are ludicrous. But just as President Obama's "plagiarized" birth certificate rooted itself in the American subconscious, so too have these allegations against Clinton. And unless Clinton is, undoubtedly, the most vile and morally bankrupt person to walk the earth and hold public office, 90 percent of these claims must be false.

During Tuesday's interview, Clinton also skirted around blaming the media for her bad reputation, stating "people write books filled with unsubstantiated attacks against us. And even admit they have no evidence. But of course, it's your job to cover it. So of course that's going to raise questions in people's minds." And, to Clinton's credit, some of her claims are verified.

In a Vox article, reporter Jonathan Allen stated that there are unspoken rules the media follows when covering Clinton. "The Clinton rules are driven by reporters' and editors' desire to score the ultimate prize in contemporary journalism: the scoop that brings down Hillary Clinton and her family's political empire," Allen wrote. "At least in that way, Republicans and the media have a common interest."

Allen, who wrote a book regarding the Clinton Foundation and Clinton's time in the State Department, said, "I wanted to sell books, of course. But the easier way to do that — proven over time — is to write as though the Clintons are the purest form of evil. The same holds for daily reporting. Want to drive traffic to a website? Write something nasty about a Clinton, particularly Hillary."

No one would go so far as to say that Clinton or her family have spotless records. Almost no politician alive does. And they are secretive, prone to avoiding questions, and cold to reporters. Though Clinton is likely not willfully involved in the deaths of American citizens (or felines), she has undoubtedly brought some media and Republican ire down on herself. She has lied, or at least pulled a Brian Williams. She has messed up. And she has been stubbornly evasive.

Her "vast, right-wing conspiracy" may not be as ludicrous as the GOP wants to believe. But her refusal to answer Keilar's question or to admit any personal blame for her low trust numbers is stubborn and foolish. And that may prove to be more damning to her reputation than any GOP attack.