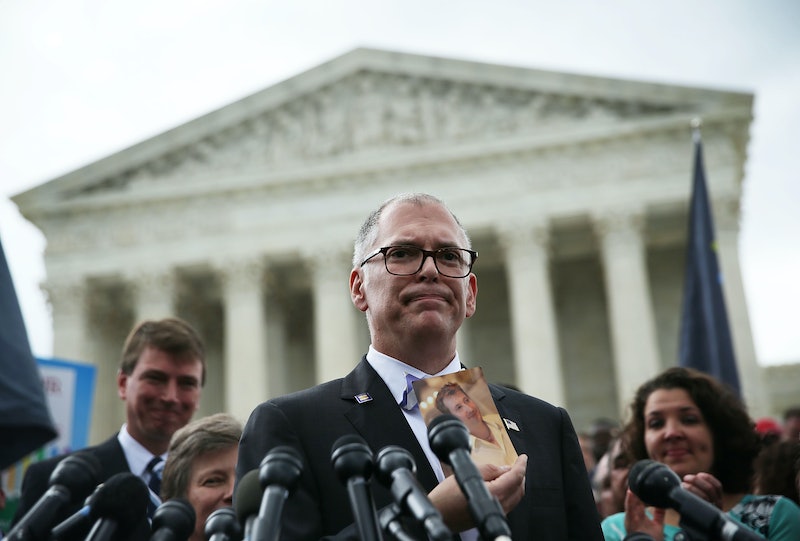 The Onion is always wrong — technically. That's what you get, after all, for being a satirical news site. But after hearing about the upcoming film about the Supreme Court's landmark marriage case Obergefell v. Hodges, I can't help but think back to the time when The Onion predicted the future with uncanny accuracy.

Jim Obergefell, the lead plaintiff in the case that formally legalized same-sex marriage in all 50 states, is reportedly writing an autobiographical book about his life and journey to the steps of the Supreme Court. Tentatively titled 21 Years to Midnight, the book will detail Obergefell's life with his late partner of 21 years, John Arthur, and the lawsuit Obergefell filed against the state of Ohio, who refused to recognize Arthur and Obergefell as married. The New York Times reported on Tuesday that a division of 20th Century Fox, Fox 2000, has already purchased the rights to Obergefell's book. Hollywood's intent, according to The New York Times, is to make an accessible mainstream film in the likes of Philadelphia or perhaps, for a more recent comparison, Milk.

But little does Hollywood or The New York Times know that The Onion predicted this big-budget, action-packed, heart-string-tugging studio fare two years ago. Two years!

Let's revisit June 2013, a time when gay marriage was legal in barely one dozen states. Following the Supreme Court ruling striking down a key provision of the Defense of Marriage Act, The Onion released an article with this prophetic headline: "Scalia, Thomas, Roberts, Alito Suddenly Realize They Will Be Villains In Oscar-Winning Movie One Day."

Shortly after turning in dissenting opinions in landmark federal rulings today that struck down the Defense of Marriage Act and conferred full federal benefits to married same-sex couples, Supreme Court justices Antonin Scalia, Clarence Thomas, John G. Roberts, and Samuel Alito reportedly realized today that they would someday be portrayed as villains in an Oscar-winning film about the fight for marriage equality.

And continued with this beautiful (and beautifully fake) quote:

"Oh, God, the major social ramifications, the political intrigue, all the important people involved in the case — I'm going to be played by some sinister character actor in a drama with tons of award buzz, aren’t I?" said Scalia, joining his fellow dissenting justices in realizing they would be antagonists in a film potentially titled Defense Of Marriage and probably written by Tony Kushner. "I'm going to be portrayed as a closed-minded Neanderthal and the very symbol of backward thinking. And at the end of the movie, when my character realizes he’s on the wrong side of history, the audience will feel emotionally fulfilled because the hero attorney, probably played by George fucking Clooney, will have won. Great."

OK, so The Onion may have been off on one major detail — the upcoming, potentially successful, crowd-pleasing, award-winning film will not be about the DOMA case. There's also no guarantee that Paul Dano will finally get his Oscar nomination by playing a "gay rights crusader," and it's unconfirmed at the this time if George Clooney is playing one of the attorneys (though I could totally see Clooney taking on the role of Obergefell).

But The Onion was right about some of the most important roles in the film: Scalia, Roberts, Thomas and Alito definitely fit the roles of the villains. And the heroes? Well, we all know those badass, justice-seeking roles belong to Kennedy, Kagan, Sotomayor, and Notorious R.B.G.

More like this
10 Times Boris Johnson Got It Wrong On Trans Rights
By El Hunt and Sam Ramsden
The 'Hocus Pocus' Sequel Finally Has A Release Date & It Makes Total Sense
By Shannon Barbour and Radhika Menon
What Does Doctor Strange’s Third Eye Mean?
By Arya Roshanian
Anne Hathaway Is Giving Major Princess Mia Vibes On The Cannes Red Carpet
By Sam Ramsden
Get Even More From Bustle — Sign Up For The Newsletter