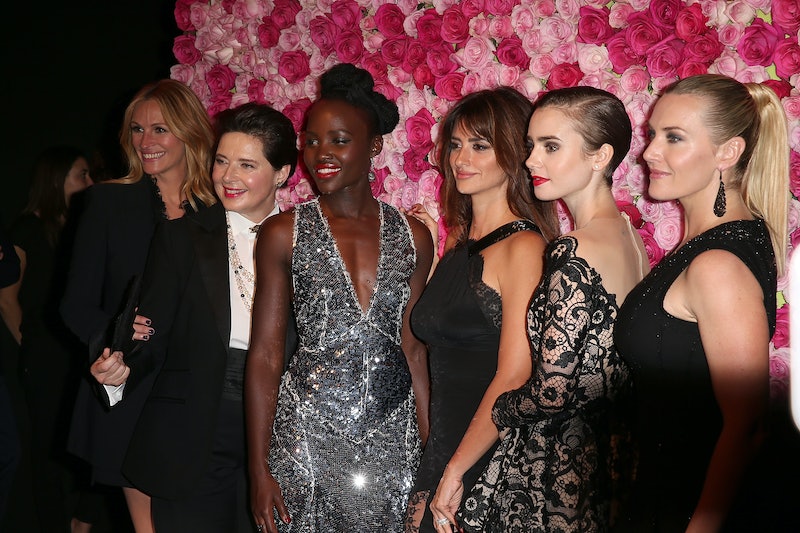 The top clubs and restaurants in Paris must have been empty on Tuesday night, because every single It Girl was feting Lancome's 80th Anniversary at the French brand's party, held at the Casino de Paris. Veteran beauties Julia Roberts, Isabella Rossellini, and Penelope Cruz rubbed elbows with fresh-faced stunners like Lilly Collins and Lupita Nyongo. Daria Werbowy was the sole actual model in the line-up, but she held her own as she towered above the actresses looking glam.

It's the first time all of Lancome's famous faces have been in a room celebrating the brand together, and everyone was positively glowing, and not just because of their flawless makeup looks. When you're one of the faces of the most chic beauty brands in the world, what's not to smile about? As Rossellini put it, landing a Lancome contract "is like winning the lottery." (When asked what they want to wish the brand for it's birthday, Julia Roberts cheekily replied "An extension on our contracts!")

Metallics, black and nude were the color schemes of choice for the red carpet fashion — perhaps this was the stars' way of letting the impeccable makeup do the talking — but that in no way translates to boring.

Lilly Collins (who, thanks to her newer, shorter 'do, actually kind of looked like a young version of Rossellini) paired slicked-back hair with a tres ladylike high-low lace dress.

Penelope Cruz looked ferocious in a black dress that was more accented than her English. Lace-covered slits, a criss-cross neckline, and a blood-red manicure made the Spanish mamma stand out.

Kylie Minogue wore not one but two looks as she arrived, performed, and partied.

What's a party without music — and an outfit change? Minogue looked absolutely goddess-like in a white column dress to perform.

Of course, this being Paris Fashion Week, there were no shortages of bloggers and models as well.

Chiara Ferragni was there, looking for all the world like a high-fashion Eloise in a striped confection over an off-the-shoulder crop top.

Blogger Kristina Bazan, who apparently also got the "black with cut-outs" memo, paired her dress with strappy sandals.

Petra Nemcova wore a red-hot, one-shouldered jumpsuit — with lips to match, and a hair flip that should come with it's own neck brace.

And there were more models at every turn, including blondies Hanne Gaby Odiele and Daphne Groeneveld.

Les Twins (that's really what they're called) also showed up. The 6'4" identical twin brothers are dancers and choreographers in France, and have worked with Beyoncé and Missy Elliot. I'll admit, I'd never heard of them until now, but after seeing this photo I will definitely be stalking, er, following them on social media.

And how about this rose-covered entryway that the A-list guests arrived through? It kind of puts the wall of roses Kanye got Kim K for Mother's Day to shame...

Congrats on eighty beautiful years, Lancome, and slow-clap for getting the most gorgeous faces from Hollywood, the fashion industry, and beyond to party with you!