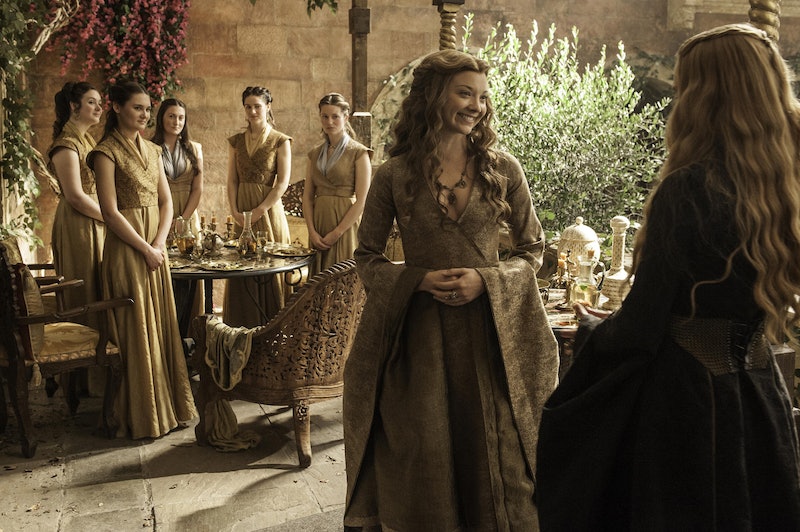 If you're anything like me, then you've talked your friends' ears off about the insane Game of Thrones season finale. In comparison to past seasons of GoT, Season 5 was relatively mild until the final shocking episodes. Seriously, the finale left me in a bubble of horror and confusion. There was just so much to try and digest, that I felt as though I was witnessing "The Red Wedding" all over again. That's not an experience that I have any desire to relive during this lifetime. In the past, even if things were going horribly wrong for a few characters on GoT, everyone else was normally thriving and doing well. After the fifth season, it looks as if Westeros has beaten everyone down. Even the Lannisters are wallowing in despair and what's more, I actually feel sorry for them. Yes, somehow, I cannot wait for Game of Thrones Season 6, and the emotional disasters it has in store for me.

The worst part about all of this, is the fact that we all have to wait until next spring in order to learn what's going to happen on the epic fantasy. Since the series has caught up with George RR Martin's books, we can't even look to them as a source of comfort. When we last left these characters, Daenerys Targaryen has possibly been kidnapped by the Dorthraki; Sansa has been forced to put her faith in Reek; and (worst of all) we Jon Snow is dead (at least for now). All we can do is cross our fingers and hope that Martin will release his latest book, Winds of Winter before Season 6 premieres, but since that is unlikely and Season 6 is almost a year away, we GoT obsessives must keep it together somehow. Our poor friends and family need some relief, after all. And, if I know anything, it's that watching movies is the cure to basically anything that ails you, even Game of Thrones withdrawal.

So, here are eight movies to watch if you miss Game of Thrones. Hopefully they can help... at least a little.

What’s It About: This gritty film is set in 14th century England during the outbreak of the deadly bubonic plague. Black Death follows a young Monk and a knight who lead a group of soldiers into a mysterious village where victims of the plague are apparently rising from the dead. Why You’ll Like It If You Like Game of Thrones: Not only is Black Death a fantastic film, but it also has some GoT alum in it. Sean Bean (Ned Stark) is Ulric, the knight in the film, and Carice van Houten (Melisandre) also stars. The film has all the gore and death that you can handle. And, there is a healthy dose of supernatural fun as well. Black Death can be streamed on Netflix.

What’s It About: Set in 13th century England, Ironclad is the story of a group of Knights Templar, who fight to defend Rochester Castle against its tyrannical king. Why You’ll Like It If You Like Game of Thrones: Like GoT, war and power are major themes in Ironclad. Still, much of the appeal of the film is the violence, blood and gore. If those are some of the many reasons why you flock to the HBO series then you'll love Ironclad. The film is on Netflix.

What’s It About: This classic film is the perfect tale of betrayal and revenge. Russell Crowe plays Maximus, a Roman General who is deeply betrayed when his family is murdered. Seeking revenge, he goes to Rome as a gladiator.

Why You’ll Like It If You Like Game of Thrones: If you were intrigued by the death games in Meereen that Daenerys was forced to sit through, then Gladiator will be right up your alley. The film is all about fighting to the death because you have nothing else to lose. It actually rivals GoT for its displays of barbarianism. Gladiator is also on Netflix.

What’s It About: Troy is a film that depicts the epic battle between the kingdoms of Troy and Sparta. I'm sure you were required to read Homer's Iliad in high school, but this film takes that tale and depicts it in an epic spectacle. The story follows the Trojan prince Paris, after he kidnaps the Spartan King's wife Helen and takes her back to Troy. Paris and Helen's illicit relationship sparks the battle between the two nations.

Why You’ll Like It If You Like Game of Thrones: What's more interesting than tales of honor and glory? Troy makes GoT's Battle of Blackwater look like child's play. There are ships, swords, and other epic displays. Plus, there is the added bonus of seeing Brad Pitt in gladiator gear.

5. The Lord of the Rings Trilogy

What’s It About: This fantasy epic trilogy, follows Frodo Baggins and his unlikely group of comrades all tasked with destroying an evil ring of power. Frodo, along with his friends leaves his home at the Shire in order to venture across Middle Earth and destroy the ring in the fires of Mordor.

Why You’ll Like It If You Like Game of Thrones: If you loved Ned Stark, then you'll be happy to see Sean Bean in this saga. Like GoT, the film is full of mystical creatures. These films are about the greedy desires of mankind, which could be a lesson to many Game of Thrones characters. Plus, A Song of Ice and Fire writer George R.R. Martin has stated repeatedly that he was greatly influenced by J. R. R. Tolkien, the creator of the Rings. Yeah, this'll do.

What’s It About: This classic film follows Buttercup and her one true love Wesley as they battle against the evils of their Kingdom in order to be reunited. The idea that you haven't yet enjoyed this movie is pretty "inconceivable," but if you haven't, you really should.

Why You’ll Like It If You Like Game of Thrones: George R.R. Martin said that he got inspiration for fan favorite Oberyn Martell after watching Inigo Montoya confront the six-fingered man in The Princess Bride. Oberyn's demise stems from his lust for revenge and it's amazing how Martin got such dark inspiration from a relatively light-hearted film.

What's It About: If you have never seen Braveheart, here is a chance to see Mel Gibson in his prime. This medieval war film is about William Wallace; a Scottish hero during the 13th century who rallies amateur Scottish troops to defeat the British.Why You’ll Like It If You Like Game of Thrones: Just like GoT, Braveheart is about war, love and empire. George RR Martin has always said that he has a soft spot in his heart for the underdog. Braveheart is the underdog's story.

What's It About: This historical drama follows, Balian, a French blacksmith, who after his wife's sudden death follows his father on a crusade to Jerusalem. Balian soon finds himself caught up in a war between King Baldwin IV and his men who wish to wage war for their own personal gain.

Why You’ll Like It If You Like Game of Thrones: If you love Jon Snow's storyline in Game of Thrones, then Kingdom of Heaven is the film for you. The film is about an ordinary man who rises up to defend his people and his country. Also, Orlando Bloom plays Balian so that's all the information you should need.

Hopefully these movies can keep you distracted. Of course, they can't bring Jon Snow back. Only Martin & HBO can do that...