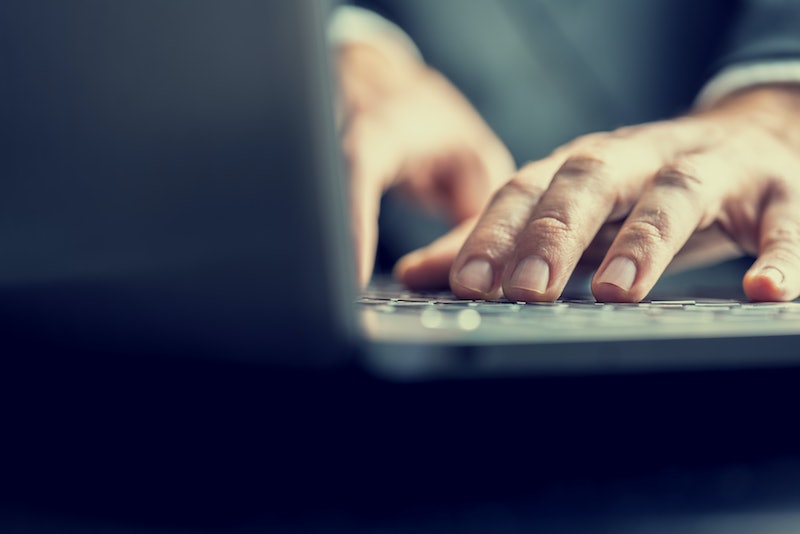 It's no secret that women get harassed online a lot but the fact that it's common knowledge at this point only makes it more important to talk about it. Which is why a new video of women at The Guardian US reading Internet abuse they've received is an important reminder that no women are immune from harassment. Not even professional journalists who are just doing their jobs.

In the video, five editors and journalists — Mary Hamilton, Jessica Valenti, Megan Carpentier, Rebecca Carroll and Sady Doyle — read various comments they've gotten online, out loud, in all their terribleness. Some of them come from social media, while others were email or comments on articles; regardless as to the medium in which they were communicated, though, all of them have one thing in common: They're awful.

It is both constantly amazing and also depressingly unsurprising to me that people would actually take the time to put any of this stuff into writing and send it to another human being. What is wrong with people? Why do they think it is at all acceptable to treat another person like this? Why would they spend so much time and energy on such unnecessary negativty? Do they not realize that they are the bad guys in the story?

I have so many questions.

But mostly, I just have a lot of respect for women who are able to read these types of comments, literally laugh at them, and then go back to doing their jobs anyway. No one should have to be able to do that, but those who not only can, but do, are pretty badass.

Here, for the record, are some of the things people say to women who dare to have opinions on the Internet. (And please note, many of them are disturbing, so trigger warning for sexual assault here.)

"A Bit of Rape Never Harmed Anyone"

So we're starting this off well, huh?

This was in response to an article about men's hairstyles, apparently.

"You Need To Be Gagged."

But feminists are the ones against free speech, am I right?

That in response to a post about the n-word.

"I Will Fuck Your Ass To Death."

You know how Lewis's Law states that the comments on any article about feminism prove the need for feminism? Well, this was in response to an article about how women are harassed online. So... yeah.

You can check out the rest of the comments here. (And again, trigger warning.)

More like this
How To Fight For Reproductive Rights, Based On How Much Time You Have
By Courtney Young
Sandra Bullock, Girlboss Extraordinaire
By Matt Harkins & Viviana Olen
The Viral TikTok “30,000” Sound Fits Nearly Every Scenario
By Courtney Young
Kris Jenner’s Advice For Kim Kardashian Is Going Viral On TikTok
By Courtney Young
Get Even More From Bustle — Sign Up For The Newsletter