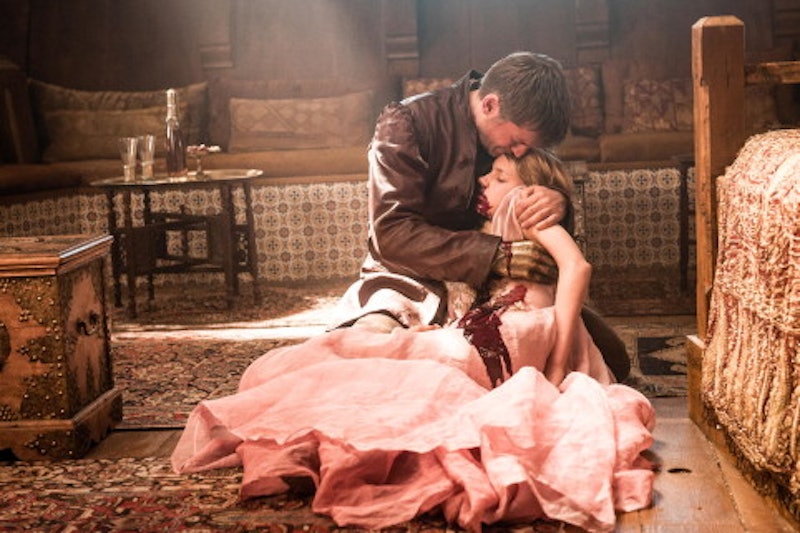 Though A Song of Ice and Fire creator George R. R. Martin is often credited with breaking the hearts of ASOIF readers and Game of Thrones viewers alike, the author has confirmed that he won't be writing any of the episodes for the sixth season of Game of Thrones. However, if you thought that meant Season 6 of Game of Thrones would be less saturated with death, destruction, and horrifying moments, I have one thing to say to you: LOL, NO. Though, yes, Martin will be spending his time completing Winds of Winter (the long-awaited sixth installment in the Ice and Fire series), Game of Thrones showrunners D. B. Weiss and David Benioff have plenty of opportunities to play with viewers' hearts in Season 6 — and I have no doubt that they're going to take them all. After all, though Weiss and Benioff have reportedly been informed of the major plot points from the upcoming novel, they are for all intents and purposes off-book — meaning that they can do anything to play with our hearts in Season 6.

Weiss and David Benioff have proven that they can be just as sadistic as Martin when it comes to killing off characters, or putting them in terrible situations that they never actually encounter in the books. Sansa's marriage to the horrific Ramsay Snow and Myrcella Baratheon's death, for instance, are just a couple of the terrible things that never actually happened in the books. Though the show and the books are inevitably supposed to wind up in the same place, Weiss and Benioff can choose to take whatever path they so desire to steer the characters in that direction.

This can only mean that we will be watching the showrunners gleefully toy with our hearts, as we breathlessly await the fate of our favorite characters. Though the next season of Game of Thrones won't be premiering until spring 2016, here are seven ways Weiss and Benioff might play with our hearts in Season 6.

1. Keeping Us In The Dark About Jon's Fate

While you will never be able to convince me that Jon Snow is actually dead, it looks like we might not see him at all during Season 6 whether or not he's actually dead. If Jon is going to be brought back to life, it's going to take a great deal of time: his body is going to have to be retrieved from the wall, and whoever pulls off his resurrection is going to have to work their magic. If Weiss and Benioff really wanted to be cruel, they would keep all of the action surrounding Jon's status off-screen during Season 6 — effectively leaving viewers in the dark about his fate.

2. Making Brienne Too Late To Save Sansa

I was utterly devastated when Brienne missed Sansa's candle signal during Season 5. Thankfully, Reek helped her escape. Though Brienne is near, I have a deep fear that Ramsay may catch up to Sansa before she and Reek can get help. If Sansa does, in fact, escape by some miracle, I'm sure Weiss and Benioff wouldn't let it happen without someone else dying — whether that be Reek, Podrick, or Brienne.

The last time we saw Sam, he and Gilly were traveling to Oldtown so that he could train to become a maester. Things are actually looking up for the unlikely couple! However, if Sam hears about Jon's death, I fear that he will return to the Wall to avenge his friend — and that might not end well. If Weiss and Benioff even hint towards that, I'm not sure my heart will be able to handle it.

The massacre at Hardhome was only a small glimpse into the horrors of the White Walkers' world. Right now, the Night's Watch and the Wildlings at the Wall are sitting ducks. Winter is coming, and it won't be pretty when it arrives — so I'm sure Weiss and Benioff won't spare us any of the gory details.

Daenerys is currently on some hill surrounded by Dothraki soldiers. I don't see her getting out of this situation, especially since Drogon is currently injured. My favorite GoT couple of all time was Dany and Drogo because of their connection — however, if Dany has to marry a new Khal in order to stay alive, the new guy might be dangerous.

Did anyone else see how Varys just appeared in Meereen out of nowhere? Varys has always been very cunning, and wouldn't put it pass him to cause havoc in Meereen. He's a fantastic character, though, so I would be deeply pained if he had sinister plans.

Ayra can't let go of her past, and that has cost her a lot — specifically, at the end of Season 5, her mentor punished her with blindness for disgracing the Many Faced God. The girl has suffered so much, I would be devastated if her blindness was permanent... but, knowing Weiss and Benioff, she's likely got a difficult road ahead of her.