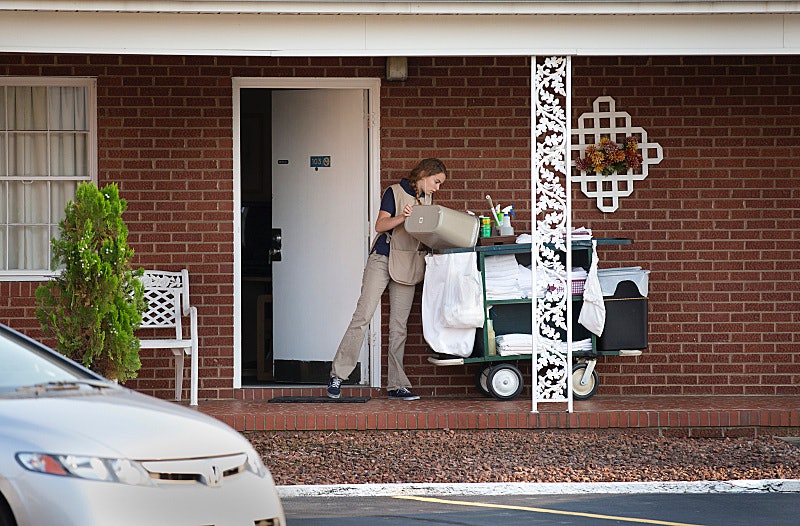 After weeks of so-so episodes filled with boring CIA plots and unbelievable character developments, Homeland finally gave viewers an installment worth caring about. Sunday night's episode of the show was wonderfully reminiscent of Season 1, with a lovably devious Saul, some great Carrie-Brody scenes, and plots that seemed just far-fetched enough to actually work. Plus, there was a workout montage that rivaled Rocky's. By far, though, the best part of the episode came close to the end, when Brody convinced Carrie to let him see his daughter, Dana. It was only one scene, but the reunion was just as emotional, well-acted, and painful to watch — in short, everything Homeland does best.

The scene begins with Brody knocking on Dana's door at the motel where she works and apparently lives. After taking a few seconds to comprehend the fact that her father, who she thought was on the run after blowing up the CIA, is standing at her door, Dana reluctantly lets him in. Relieved, Brody begins explaining how he didn't do the crimes the world thinks he committed, but Dana doesn't believe him, or she simply doesn't care.

"Did you think ever for one second if I wanted to see you?" she says, crying heavily. "What did you want to hear? That you were a good dad? That despite everything that it's all okay? What do you want me to say? I will say it to you as long as you promise that I'll never have to see you again."

Stunned and heartbroken, Brody doesn't respond, just walks out the door. He realizes his relationship with his daughter is irreparable, and, after learning earlier from Carrie that Dana had attempted suicide after the bombing, he knows that all the pain his daughter feels is entirely his fault.

The whole scene is fantastic, with incredible performances from both Damian Lewis and Morgan Saylor. It's also an important scene, in regard to the character of Dana. For all of this season and a good portion of last, fans have hated on her for everything from her moodiness to her choice of boyfriends. It's the fault of the writers, who have saddled Dana with annoying, repetitive storylines, making the character (and the actress who plays her) Homeland's main target for criticism.

Finally, though, Homeland gave Dana the redemption she deserves. Sunday's episode saw her react to Brody's return with a realistic mix of emotion and rationality, proving that her character isn't some dumb kid who only cares about driving fast and kissing boy. In telling her father that she never wants to see him again, she isn't being bratty or rude, just honest; Brody has caused his family enormous pain, and Dana's experienced more than her share of trauma due to her father's actions. It's a brave, mature thing to say, and it's a big "take that" to Dana-haters who viewed the character as naive, immature, and unnecessary to the show.

Although there's no knowing if last night's scene was the last Homeland viewers will ever see of Dana Brody, there's a decent chance that she won't be coming back. There's no real need, with Brody shipped off to Iran and Jessica having coming to terms with her daughter's decision to leave home. Sunday's episode was likely the end of Dana on the show, and as send-offs go, it was a pretty perfect one. It redeemed her character in many viewers' eyes, giving her the complexity and maturity that she demonstrated so likably back season one. It also emphasized Dana's importance on the show, which, in a season filled with joyrides and hospital stays, was something to be questioned.

Dana is the one character who Brody connects to more than anyone else, even Carrie. Her opinion of her father is the biggest factor in Brody's opinion of himself, and so by giving her a chance to tell Brody how she truly feels, Homeland gave Brody the opportunity to reevaluate his own life. He realizes that he has a duty to give Dana the distance she wants, and that he needs to focus on redeeming himself by helping the CIA in one last mission.

So thank you, Homeland writers, for giving Dana such a fitting sendoff. She's a difficult character to love, yes, but last night's scene proved that she's so much more than some irritable teen saddled with unfortunate storylines. If this is the last we see of her, then it's the best exit we could ask for. And if the writers choose to bring Dana back down the road? Then let's hope they realize how good the show can be when they make Dana someone to root for, not someone to shower with hate.