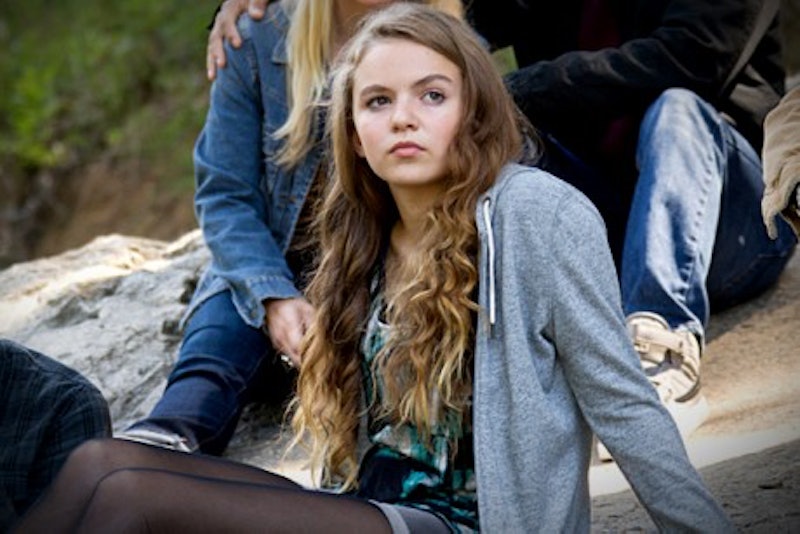 Breaking Bad has barely been gone three days, and already, it's influencing other shows. Remember how Bad fans unfairly ganged up on Skyler White, berating her for being a bitch and ruining Walt's fun? Well, the "character issue" that plagued Skyler isn't limited to Breaking Bad — it's found its way onto Homeland, where teenage Dana Brody is facing the wrath of fans for being unlikeable, annoying, and pretty much "the worst," according to the Internet. Everyone from Buzzfeed to Business Insider (and yes, even Bustle ) has put in their two cents on what's wrong with Dana, and it's time to stop. Just like all the anger towards Skyler, the hate towards Dana is unwarranted, unfair, and, frankly, just plain rude. Let's break down some of the criticisms:

"Dana's so moody. Why can't she look happy?"

First of all, remember this: Dana is 16. When you were a teenager, were you always in the best mood? And assuming your dad wasn't Nicholas Brody, your life was probably a little less stressful than Dana's. As a little kid, she had to deal with her father being sent off to war. Only a short while later, she was told that he died in Iraq, and so she had to cope with that devastating fact. For the next eight years, as her family began to rebuild, Dana got to be a normal teenager. But then everything was shot to hell when her father unexpectedly returned. Between his PTSD, her mom's apprehension, and her family's newfound fame, Dana's life suddenly became overwhelming. Unfortunately for her, that wasn't the half of it. She was thrown into the spotlight when her dad ran for Congress, was entrusted with many of his major, unsettling secrets, and was seemingly the only one of her family members that believed that something was very, very wrong with Brody.

And then her boyfriend committed a hit-and-run. Dana, the passenger, was not innocent there, but she wasn't the one driving. When it was discovered that the victim died, a wracked-with-guilt Dana wasn't even allowed to report the accident. So that was on her conscience.

All of this was minor, though, compared to what happened at the end of Season 2. A terrorist attack killed hundreds of people, including Dana's boyfriend, and the blame fell onto her father, who became the subject of an international manhunt. Thanks to Brody, Dana and her family received death threats, their media attention quadrupled, and the family slid into financial distress. Compound that with the fact that her dad was still missing, her boyfriend was dead, and all of it happened in what, a year?, and it wasn't all that far-fetched that Dana would be driven to commit suicide.

Yeah, forget that part? We learned in the Season 3 premiere that a clearly overwhelmed and depressed Dana slit her wrists in a bathtub, but thankfully was discovered before too late. She spent a month in the hospital, recovering from her injuries and learning to "live one day at a time" in group therapy. The day she got out, she was greeted with hounds of paparazzi screaming questions like, "Did you really attempt suicide?" and "Is your father a terrorist?" And when she finally got home, she overheard her mom and grandma debating the seriousness of her attempt, saying, "if she really meant to kill herself, she would've."

"Fine, she's gone through a lot. But she's just so unlikeable!"

This is the criticism that's the most bothersome. Dana isn't unlikeable. She's smart, kind (remember the hit-and-run guilt), and surprisingly funny ("What did the optimist say when he jumped off the building? So far, so good!"). Before everything happened to her family, she was a regular, sarcastic teen who enjoyed doing normal 16-year-old stuff like hanging out with friends, dating guys, and occasionally partaking in illicit substances.

Once Brody returned and everything went crazy, there wasn't any time for Dana to do those things, at least without major repercussions. So she got a little obnoxious and acted out — big deal, teenagers do that. But she never stopped being likable, even when the circumstances warranted it. Look at how she handled getting home from the hospital; she kept her cool while her family flittered around, calmed them down with jokes at the dinner table, and gave a warm hug to her brother, who, out of all of Homeland's characters, deserves attention the most. (Seriously, someone get that kid a storyline.) She's not unlikeable; in fact, she's actually pretty cool.

Yet, Homeland fans don't seem to realize that, or if they do, they simply don't care. Maybe it's because viewers just love having someone to hate, regardless of the reason, and on a show like Homeland, where most of the lead characters are too multi-faceted to pigeonhole, Dana is the easiest. Or maybe it's because Dana's a girl, and female characters rarely get the same respect as their male counterparts. Perhaps if Dana was a guy, her post-Brody behavior would be considered resilient, not irritating. Regardless of the reason, though, it's time to lay off Dana Brody. She doesn't deserve your hate.

More like this
Sandra Bullock, Girlboss Extraordinaire
By Matt Harkins & Viviana Olen
Spice Girls’ Net Worth: The Richest Member Is Wealthier Than The Rest Combined
By Hugh McIntyre
What’s New On Netflix: 'Stranger Things' & 'Somebody Feed Phil' Return
By Arya Roshanian
Michael Peterson & Sophie Brunet’s Relationship Timeline
By Morgan Leigh Davies
Get Even More From Bustle — Sign Up For The Newsletter