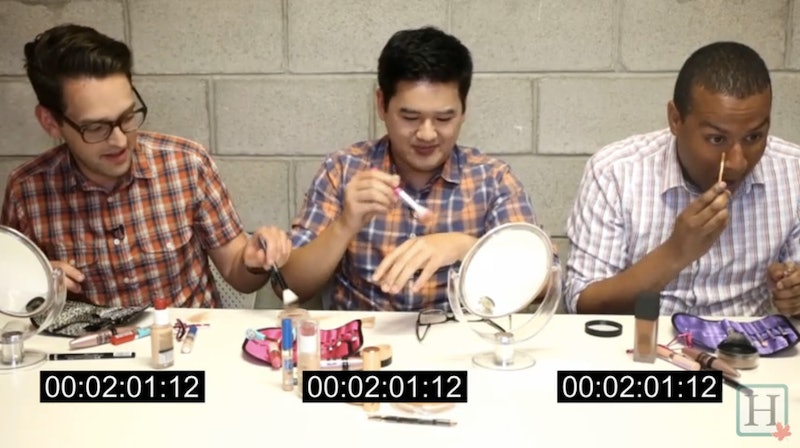 If you're a girl and you have never had someone comment on the amount of time it takes you to get ready, I applaud you. Even the most low maintenance of girls seem to get judged by the time it takes them to get ready, even if it's only a few minutes to throw on a BB cream. Huffington Post Canada Editor Madelyn Chung decided enough was enough, so she challenged three guys to try to recreate her morning makeup routine. They just so happened to be her co-workers, and yes, and the results were exactly as you'd imagine.

These poor guys didn't even stand a chance. Chung starts the challenge by showing her co-workers her morning makeup routine, which takes her about five minutes. Instantly, the men were overwhelmed by the fact that she puts on concealer on her eyes. Most of her routine was fairly standard and simple, but the second she pulled out the eyelash curler, I knew these guys were dead meat. Every single time I've used an eyelash curler in front of the male species, they freak out and call it a "medieval torture device." I wish I was kidding. Chung finished her daily makeup routine in five minutes flat, and then it was the guys' turn.

The competitors actually followed Chung's routine pretty well, although the execution definitely was not flawless, because eyeliner is hard, okay? Dan (on the left) got off to a rocky start when he couldn't open his bottle of foundation, which the men appropriately called "the brown bottle" and concealer was "the little brown bottle," but he managed to finish the makeup routine before his colleagues, in about nine minutes.

After a few fumbles with the eyelash curler and some mishaps with the eyeliner, all of they guys ended up finishing Chung's makeup routine in 10 minutes—twice the time it takes Chung every morning. It seems as though the experience was enlightening for these three, because they ended the video by saying they are officially "100 percent sympathetic" and apologizing for ever making comments about girls taking too long. So that's one small win for womankind, I guess.

To watch the video in its entirety, head over to HuffPost Canada's site here. Believe me, you're going to want to watch this.