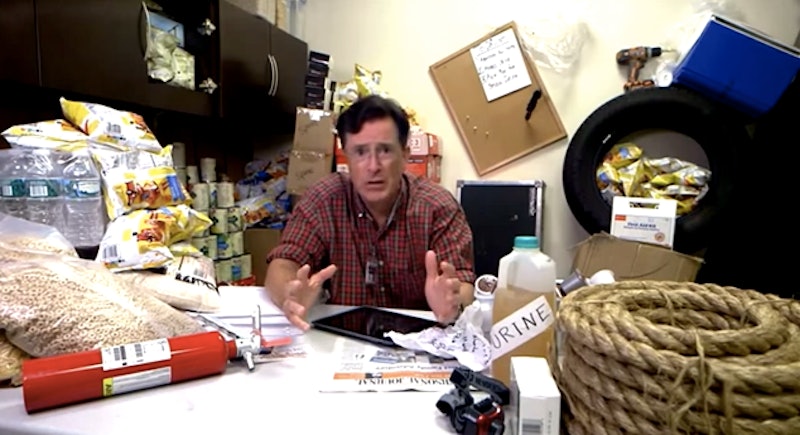 According to Stephen Colbert, the apocalypse was not the dire seven months between the end of The Colbert Report and the release of his Colbeard video, but the time after the computer bust that led to the New York Stock Exchange shutdown, among other electronic haltings that happened on Wednesday. "Greetings, remnants of the before times," he says to the camera in Colbert's "Apocalypse Dow" YouTube video that he posted to the official The Late Show channel. "Our worship of technology has midwived our doom. Grounded flights, stock market, a totally unusable redesign of Seamless. COME ON!"

He mocks the hysteria of the news media following the shutdown, and even brings in an intern to "chrome" for a Mad Max parody. The marketing campaign for The Late Show with Stephen Colbert has been gifting us with consistent, topical material, which in addition to interviewing celebrities, is essentially what his job as of September 8th will be. In the current television landscape, people consume late night shows in the forms of online clips the next day, so he's basically already nailing the job.

The sketches on his YouTube channel give us a glimpse at what he will be doing every week night starting in the fall, and what he had been doing on the Report for several years prior. This web videos are effective in building a bridge between the old show and the new show, as he experiments in and out of character, speaking to the camera and directly delivering jokes, or creating scenarios like the post-NYSE apocalypse (points for the jug labelled "urine").

In this video, Colbert promises a "weekly edict," so we're looking forward to his video next week. In the meantime, watch "Apocalypse Dow," and try to survive "our doom."

More like this
Yes, Billboard Queen Angelyne Really Ran For Governor Of California
By Brad Witter
Twitter Is In Utter Meltdown After 'Derry Girls’ “Poignant” Finale
By Sam Ramsden
10 Times Diana & Meghan Spoke Similarly On The Royal Family
By Sophie McEvoy
Kim Kardashian Remembers Her Last Words To Death Row Victim Brandon Bernard
By Jake Viswanath
Get Even More From Bustle — Sign Up For The Newsletter