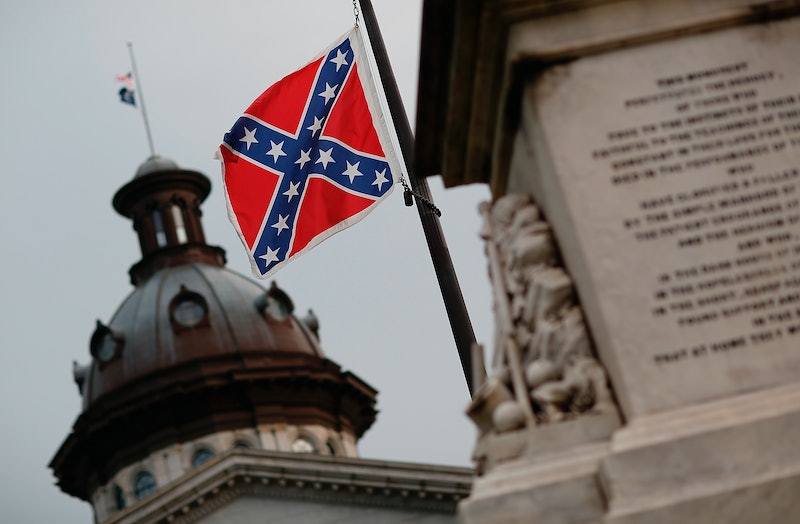 Nearly 155 years after South Carolina became the first U.S. state to secede from the Union, marking the beginning of the American Civil War, the South Carolina House has voted to remove the Confederate flag from the state Capitol building. Let's all take a moment to hum "Let It Go" from Frozen quietly to ourselves, shall we? Now doesn't that feel good?

The fact that the Confederate flag is still flying over a government building in 2015 offends many, while others argue that the flag isn't representative of slavery or racism, but rather a symbol of "Southern heritage." But it's a little-known fact that at least two of the most famous Confederate leaders, Robert E. Lee and Jefferson Davis, wanted that flag retired in their lifetimes.

The South Carolina House vote comes after weeks of citizens and lawmakers demanding that not just South Carolina but the entire country "Take It Down." This new movement was spurred by the June massacre of nine members of the Charleston, South Carolina AME Church at the hands of the Confederacy-and-apartheid-inspired shooter Dylann Roof.

In honor of those lives lost and in response to the outpouring of support for the flag's removal, the Southern Cross is finally coming down this Friday, officially welcoming South Carolina's Capitol building into the 21st century. That means, among other things, that it's taken South Carolina over 150 years to heed what the two famous Confederates said about retiring the ol' battle flag.

A quick Google Books search reveals that Robert E. Lee, commander of the Confederate Army during the Civil War, was uncomfortable with the banner. In 1865, Lee wrote in a letter to the Gettysburg Identification Meeting committee that the flag should be put away — and hinted at the negative emotions it evokes to this day:

"I think it wisest not to keep open the sores of war, but to follow the example of those nations who endeavored to obliterate the marks of civil strife, and to commit to oblivion the feelings it engendered."

"My pride is that that flag shall not set between contending brothers; and that, when it shall no longer be the common flag of the country, it shall be folded up and laid away like a vesture no longer used."

Jenny Horne, a descendent of Jefferson Davis and Republican member of the South Carolina House of Representatives, was instrumental in finally bringing down the flag. When speaking to the house on Wednesday, she said: "I cannot believe that we do not have the heart in this body to do something meaningful such as take a symbol of hate off these grounds." What wasn't immediately apparent was that she was to some degree echoing the words of her Confederate forefather. Time to fold it up and lay it away.