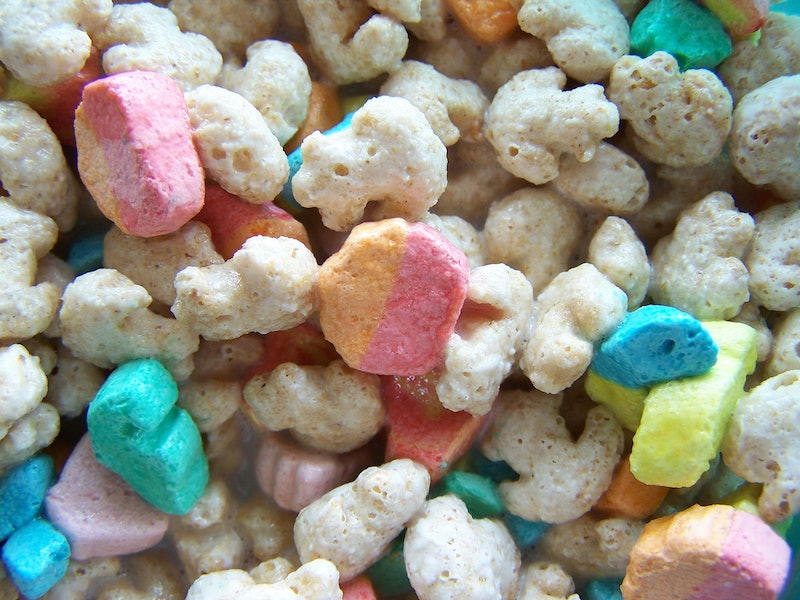 Look, I'm not here to tell you how to live your life. I'm all about exercising that free spirit: drink as much as you want, wear whatever you want, don't take your makeup off when you go to sleep. Do your thing, eat your cake. But every now and again, someone veers so wildly off course that you have no choice but to intervene. That's right: I'm talking about this incredibly upsetting trend where people are putting ice cubes in their cereal. This has to stop.

This all came to the Internet's attention (and horror) when Twitter user Corinna tweeted a photo of a bowl of Lucky Charms with ice cubes in it, alongside the caption: "Am I the only one that can't eat cereal without ice cubes?!!"

It should have ended there. The Internet should have risen up and responded with a collective, resounding, "YES, you're the only person who does that, Corinna." But, alas, we're all terrible, and the Internet decided to use this one opportunity to be supportive and respond with several messages about how a lot of people put ice cubes in their cereal.

Apparently people have been putting ice cubes in their cereal for a long time, too; indeed, BuzzFeed traced it back as far as 2012. It's like when you learn that your parents are getting divorced, and then you find out it's because dad's been having an affair for six years. Like, not only are you confused and upset, but everything is worse because it's been going on for so long and you had no idea.

I mean, yes, people can put whatever they want in their cereal. But I am still of the following opinion: Do you want to know what sadness looks like in cereal form? It looks like these 10 pictures where people ruined their cereal with ice cubes.

Magically delicious? More like magically just ruined your day with lies and tragedy.

Nothing should be able to make cereal that bright look this depressing.

That's not even a bowl of cereal with some ice in it. That's a bowl of ice with some cereal in it.

If you refrigerate your milk, yo won't need ice to keep it cold.

The eff is that, Samantha? How are you going to look a Froot Loop in the eye again after this behavior?

9. Sexykye430, Who Ruined A Good Bowl of Cocoa Puffs

I can't anymore. I just can't.