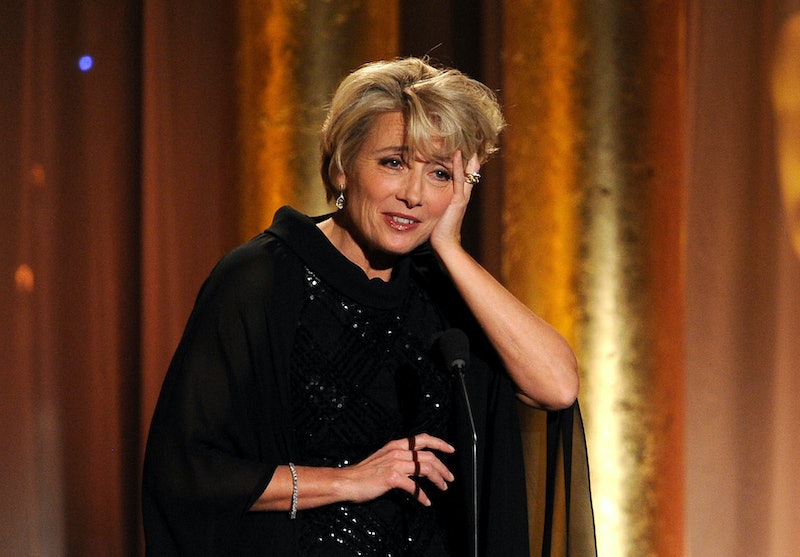 What happens when you get six of the most enterprising and talented women in Hollywood together to talk about their experience? Magic! Straight-up magic. Or at least, some pretty damn solid quotes. More the latter than the former. Still, The Hollywood Reporter 's roundtable featured Lupita Nyong'o, Emma Thompson, Oprah Winfrey, Amy Adams, Octavia Spencer, and Julia Roberts — and these Hollywood ladies had a lot to say about their craft and their lives. And it was marvelous.

Here are our favorite bits from this year's discussion with some Oscar hopefuls:

Here's 12 Years a Slave's Nyong'o on the power of representation:

I grew up in Kenya, and a lot of our programming was from all over the world, and we didn't see ourselves onscreen. It was very rare that you'd see people that look like me. And there was Whoopi Goldberg and Oprah and everything. It's so meaningful to be sitting here beside you.

And Octavia Spencer on her lady-related optimism:

Well, you have a fresh crop of female writers, and men are writing better parts for women and realizing that women can open films. I think we're making strides. We're not there yet, but I'm really excited about the past couple of years.

Here's Emma Thompson talking about working with Meryl Streep and reminding us why we will never stop loving Emma Thompson:

I've snogged her. (Laughter.) And what I learned was, you have to use tongues even if you're not a lesbian.

In fact, literally everything Thompson uttered in this interview was great, because she is Emma Thompson and she is perfect. Asked what the most challenging aspect of Saving Mr. Banks was, she responded simply "the perm," and asked about a scary moment in her acting career, she said "Ang Lee, on Sense and Sensibility, said, 'Don't look so old.' That was scary."As for what roles she'd never play, Thompson said:

Well, apart from the muff shot and things like that — but let's not go there (laughter) — there was a patch of time when I was in my 30s and just started [being offered] a whole string of roles that basically involved saying to a man, "Please don't go and do that brave thing. Don't! No, no, no, no, no!" That's a trope, the stock woman who says, "Don't do the brave thing." I said no to all of them. I'm so proud.

Her response to the interviewer asking whether people were writing better parts for women now is even better:

What the ding-dong heck is going on if this is still something we're talking about?

Can we be her? Can we be all of them? Is there some kind of morphing potion that we can take that would mush all of these women together and allow us to be all of them at once? Because we want that. Imagine all the Oscars we'd win!