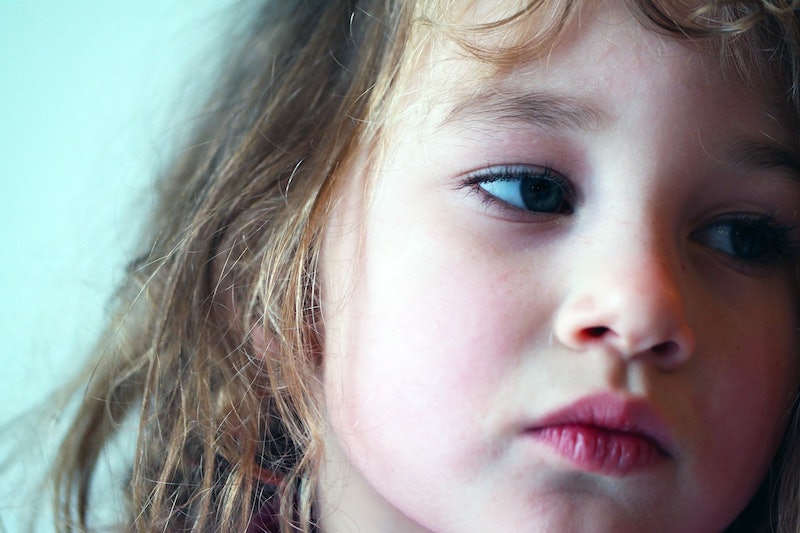 Millennials of a certain age (holla 1980s babies) might remember a time when your parents forced you to shut off Nickelodeon or The Disney Channel or, in your surly tween years, The WB to make you read a book or go outside or do your homework as a form of punishment. Outside? You'd whine. But that's so boring! Apparently no one is faced with the dull outdoors anymore, because the notion of "TV privileges" is so obsolete that actually being forced to watch TV is now considered a punishment to modern brats who have access to their own personal devices.

Taking iPads and other tablets away from kids is the new unfathomable consequence for their misbehavior. According to Minor & Co. Studio, who surveyed 800 parents of kids age 2-12 in the United States:

"Parents in nearly half of these households say that when their kids misbehave, they take away their tablet and make them ‘watch TV instead’ as punishment – creating a generation of kids for whom ‘TV is punishment.’"

One snarky little kid reports, "The iPad's cool, TV isn't that good, because you can't control it. Basically, the TV sucks."

What's happening here is that kids don't find the television to be a dynamic entertainment experience in the same way personal devices are. They enjoy the tactile interface of a touchscreen, they like being able to micro-rewind and watch the same moments over and over again, and they like having their preferences stored and personalized via outlets like YouTube channels and Netflix profiles. This fosters a sense of independence, individualism, and autonomy that they don't get watching conventional TV, which is more of a social experience and often requires sharing with others.

And the nature of punishment for children is being called into question by progressive parenting standards anyway. Researchers, psychologists, and other parenting advocates are suggesting more and more than "punishment," "negative consequences," and "time-outs" all do more harm to our kids than good.

We know that childhood trauma or being raised in an environment of fear literally shapes the physical makeup of a child's brain, wiring them for fear for the rest of their lives. Psychiatrist and traumatic stress expert Bessel van der Kolk explains:

"That leads to problems with excessive anger, excessive shutting down, and doing things like taking drugs to make yourself feel better. These things are almost always the result of having a brain that is set to feel in danger and fear."

Of course, taking away a child's iPad is not necessarily tantamount to trauma. But punishment is a fear tactic. Instead of developing a child's internal sense of right and wrong, we teach them to be afraid of consequences, without any sense of connection to their impulses, desires, or emotions.

2. When you punish children for lying, it only makes them lie more

A recent study out of McGill University shows that if a child is afraid of punishment, they are more likely to conceal their transgression in an effort to avoid that punishment. And being punished for lying only makes that child want to lie more. Conversely, a child is more likely to tell the truth if they think it will please an adult. But jumping straight to punishments for a child who has lied sends them the message that telling the truth results in negative consequences.

Rather, McGill professor Victoria Talwar says in response to this study, we should be validating a child's honestly by recognizing when they come forward with a transgression:

“Threats about punishment are not deterrents for lying, and they do not communicate why children should be honest...If a child is playing with a ball in the house and breaks your vase but tells the truth about it when asked, you should recognize that he came clean. He may still have consequences for his transgression, but the child learns that honesty is valued.”

The key to sorting out a child with behavioral problems is to discover the root of their outbursts. Instead of sending a kid to the principal's office for causing a scene in class, it's been proven more effective to take that child aside, for however long it takes, and figure out why they did what they did. Were they feeling overwhelmed by a task? Anxious about being put on the spot by their classmates? Defensive because they didn't feel heard by a teacher? Of course it doesn't matter if these things weren't truly happening or not — what matters is that the child believes that they were happening and that their beliefs informed their problematic behavior.

Discussing their feelings, instead of punishment, helps them process their emotions more effectively. After you've done that, the Collaborative and Proactive Solutions approach suggests, brainstorm healthy coping mechanisms for the next time the child is experiencing that emotion. Do they need a snack? To move to a more private spot in the classroom where they don't feel as gawked at (like sitting in the back)? A quiet break away from class to decompress for a few minutes? We give ourselves these things as adults all the time and call it self-care. Why is it considered a radical child-rearing method to afford it to kids?