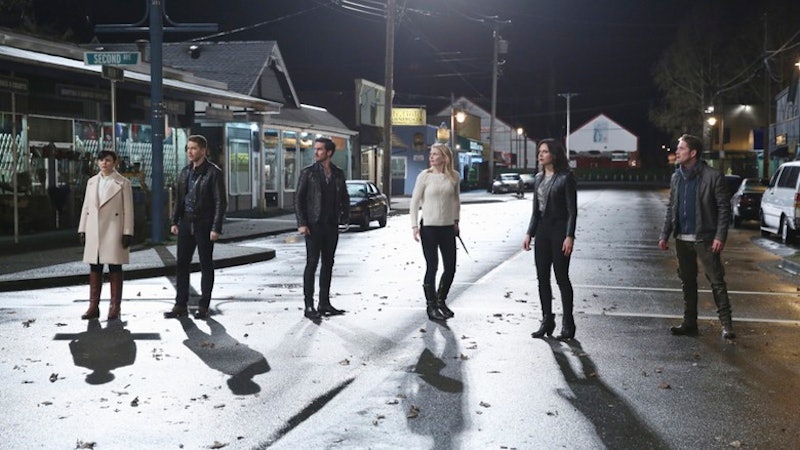 Thankfully, it's that wonderful time of year again. No, it's not time for Once Upon A Time Season 5 to premiere — that's still several months away — but it is time for San Diego Comic-Con, which means spoilers will abound for the show within the next few days. We already know a few things about Once's new season: Dark Swan will get major focus, we're going to Camelot, and there'll be plenty of new faces, to start. But enough about that — it's old news. Series execs Edward Kitsis and Adam Horowitz sat down with Entertainment Weekly before their upcoming Comic-Con panel this weekend not to tell us what will happen during Season 5, but really more of what won't.

Some of the questions Kitsis and Horowitz were asked were pretty obvious, and by definition the Hot Seat interviews are vague and meant to tease rather than truly spoil, but there are a few things that can be gleaned from their Q&A session. After all, we might not know specific plotlines for next season, ruling a few things out will be helpful for those of us who like to speculate on what's to come.

Here are a few things you can rule out from Once's fifth season, if the show's execs are to be trusted!

Emma Won't Be A Complete Monster As The Dark One

When asked if Emma's sacrifice being made from a place of heroism rather than murder would have an affect on how her power will affect her, Kitsis responded, "Sort of." I'll take that to mean "yes", and furthermore, that she won't turn into an immediate axe murderer.

It's not that Snow and Charming won't help in the quest to save Emma, but they won't be the pure and noble heroes they've portrayed themselves to be (though we obviously know better after the whole 'sacrificing Maleficent's child' situation). Horowitz confirmed that they'll definitely "cross lines" to help their daughter. Uh oh!

Regina has completely redeemed herself in the past couple of seasons, and I've said before that I'm sure she'll be Emma's Savior this time around. I still think that, but as Kitsis pointed out, Regina will likely be tempted by Emma's darkness. "It’s always more fun to hang out with someone who is willing to get into trouble than the person that won’t." Too true.

This is a bit more abstract, but since Rumple is no longer the Dark One, it stands to reason that the Dark One's power would be gone, too, and Rumple would just be a plain old man again. So will Rumple lose his magic? Kitsis is tight-lipped and won't say, which means it's possible he might keep it. How? Who knows, but anything's possible on this show.

We Won't Meet Merlin In The Season Premiere

This is a certainty and a question Horowitz answered with a firm "No." Of course, most of us had already deduced that the quest to find the only wizard capable of destroying the Dark One for good wouldn't end in the opening episode of the season, but just in case you were confused...

Hook Won't Go Back To Being Dark

Which basically means Hook is going to stay boring. I enjoyed him so much more when he had personality and a quest, even if he was a bit of a you-know-what. Kitsis thinks Emma is enough to keep Hook on the right path. "I think he has a great reason to stay good and that is to save the woman that he loves. I hope he holds on," he explained. BO-RING!

Emma May Not Be The Only Villain Of Season 5

Sure, the quest to get Emma back to her Savior self is going to be a major focus next season, but that's not to say there won't be a new villain at some point, too. Asked this very question, Kitsis replied, "You never know what’ll happen in Storybrooke." That's enough for me to go on.

More like this
The Time Traveler’s Wife Book Has A Heartbreaking Ending
By K.W. Colyard
‘SNL’ Referenced Jesse Williams’ Broadway Leak In A Chaotic Theater Sketch
By Grace Wehniainen
Selena Gomez’s ‘SNL’ Hosting Debut Had Twitter Gushing Over ‘Barney’ & Wigs
By Stephanie Topacio Long
Selena Gomez Joked About Her Relationship Status In Her ‘SNL’ Monologue
By Grace Wehniainen
Get Even More From Bustle — Sign Up For The Newsletter