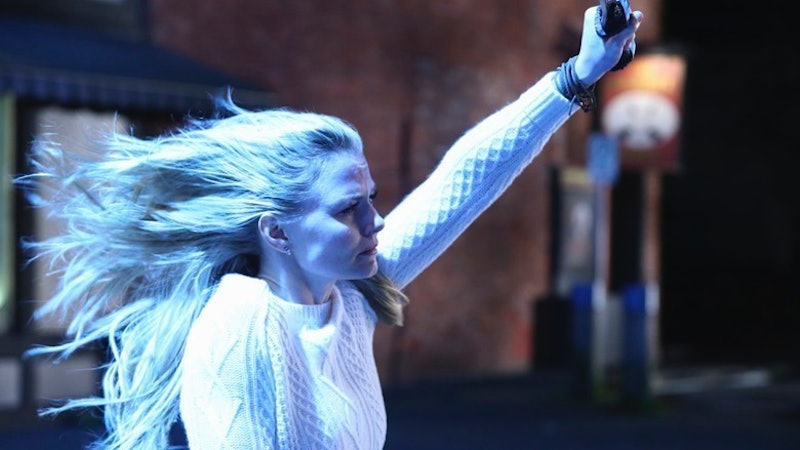 Take a deep breath, everyone. September 27 may be getting closer, but we still have a while to go before the premiere of Once Upon A Time Season 5, so it's still a bit too early to be casting judgment about things we haven't even seen yet. We already know that much of next season will focus on Emma's turn as the "Dark Swan" and the quest to find Merlin so that they can restore her to her former self. After all, the season premiere is actually titled "Dark Swan", and now that we've got the first OUAT Season 5 promo poster, it's even clearer — as if there was ever any doubt — what direction we're headed.

The poster, abstract as it is, makes one thing clear(er than ever): Emma being the Dark One is a Big Problem, and one which we'll spend a lot of time trying to solve. Of course, for anyone who's been paying attention, this isn't news; Emma was set up as Season 5's big bad wolf (or Swan?) during the Season 4 finale, and it was presented as pretty much the worst case scenario. How could the Savior, the product of True Love and possessor of light magic, hand herself over to the darkest evil of all? How would she survive? How can Regina/Hook/Charming/Snow/Henry save her from such a fate? So many questions meant to tantalize and excite us, but is it all overkill?

I like the Black Swan rip-off aspect of the poster and get what ABC was going for, but let's be real: this whole Dark Swan thing is being shoved down our throats a bit, don't you think? Take, for instance, this quote from executive producer Adam Horowitz: "As formidable as Emma was as a hero, she’s going to be exponentially more dangerous as a villain." Is that so? His co-producer Edward Kitsis didn't help matters when he added, "The first thing Emma wants to do is get the darkness out,” Kitsis says. “But will she be able to resist taking a bite of the forbidden apple?" Well, that just... doesn't make sense. I get that it's meant to be a metaphor for temptation, but... what?

I've already said a million times that I don't for one second think that this whole Dark Emma thing is going to be nearly as, well, dark and deadly as it's being played. Yes, all Dark Ones are different. Yes, Emma has as much potential in her to go dark as, say, Regina did once. But at the end of the day, she's the Savior. And while someone else might have to take over that role temporarily (cough, Regina, cough), this is by no means a permanent plot change. So what's the big deal?

I get that ABC and Once needs to drum up the excitement — or more particularly, to drum up ratings if the show wants to continue beyond Season 5 — but I'm just not as scared as I feel like they want us to be. Am I interested to see how it'll all play out? Sure, I'm already obsessed with the show and invested in the characters, so I'm in either way. But I just can't swallow the idea that it's about to seriously go down in Storybrooke and beyond because Emma made a sacrifice and took in some darkness. If Cora couldn't rip Emma's heart out, than the Darkness won't be able to win over the light within her, no matter how powerful it might be.

There's also the fact that Once is, at the end of the day, a family show. You can only go so dark at 8pm on a Sunday night on a national basic cable network. Also, you can only go so dark before you completely annihilate a character to the point that she can never be redeemed, and given that Emma is one of the two biggest characters on the show (and Jennifer Morrison one of the biggest stars, alongside Regina's Lana Parrilla), we're not going there, either. In other words, it's all gonna be OK next season. I promise.

More like this
8 LGBTQ+ TV Shows & Movies Like 'Heartstopper' To Watch On Netflix
By Alyssa Lapid
Everything To Know About Marvel's 'Echo' Series On Disney+
By Grace Wehniainen
Will Viewers Revisit Welcome To Eden For Season 2? What To Know
By Kadin Burnett
The Good Doctor Already Added 2 New Cast Members For Season 6
By Brad Witter
Get Even More From Bustle — Sign Up For The Newsletter