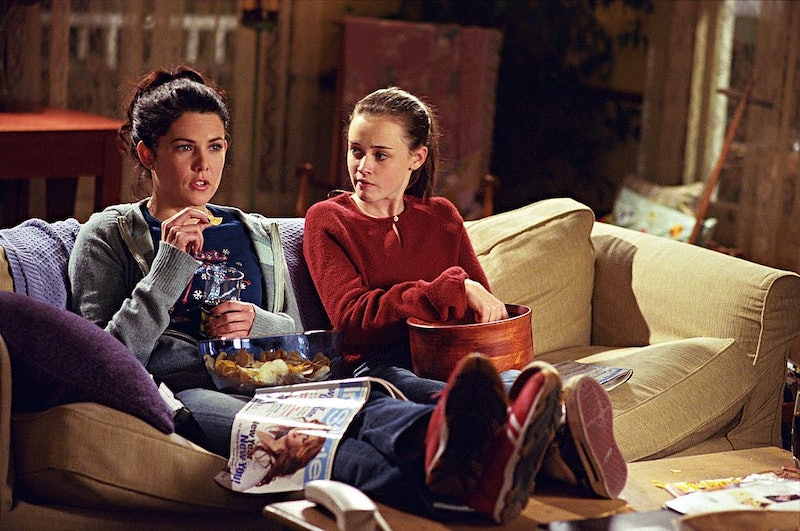 You can tell a lot about a person from their Netflix queue. After all, we live in an era where your Netflix knows you best. Netflix knows when you're hungover (binge watching Gossip Girl), when you're nostalgic (Crossroads), when you're having a solo girl's night in (Mean Girls), when you're inspired (any foreign film) and when you're just, you know, being you (Friends). Netflix even makes suggestions for you, so it's possible that Netflix knows you better than you know yourself. I mean, I did get an email specifically telling me that they'd added Clueless to the roster. It wasn't a email with a list of new movies. It was an email that said "Katherine, you might like this." And it was simply: Clueless. You there you go. If you're into A.I., apparently the technology is already here.

So what do the movies on your Netflix queue say about you? What is Netflix learning about you every time you save a movie to watch? More importantly, what can you learn about you from your choices? And what would we assume about you if we ever saw your Netflix queue? (Mine is super private, not in the least because it includes Maid In Manhattan, a movie I have watch no less than eight times. And that's all I'm giving you.)

1. There Will Be Blood

You're a straight girl and you're dating a guy you really like, and he's coming over to watch Netflix (not a euphemism). You really want to impress him, and if you know one thing about guys, it's that they love Daniel Day Lewis.

You took some cinema classes in University and you definitely fancy yourself as someone who appreciates avant garde cinema. But your idea of yourself is far different from the reality. This film will sit on your queue indefinitely as you watch Crank: High Voltage for the eighteenth time.

You appreciate the subtle art form that is Jennifer Lopez acting. Incidentally I think we'd get along very well.

Proof that you're either not squeamish and really into gratuitous killing in film, or that you fancy yourself quite the connoisseur of cinema for knowing exactly where all the modern "rip off" films got their "inspiration".

Ultimately, you're a giant sell out.

Sometimes you just need to choke on your own tears. They took Steel Magnolias off, but you're not above adapting if it means getting your bawl on.

You're certainly not a snob. You're probably a giant nerd though, and your greatest wishes in life are to attend Comic Con and also someday be chased by a giant, super-intelligent, mutated, poorly CGI-ed reptile. Alternately, you're a giant bro, and a master of beer pong.

You have Zooey Deschanel bangs and a Chat Noir poster in your living room, don't you? YES YOU DO YOU FREAKING LITTLE ADORABLE ASSHOLE.

You have impeccable taste in movies.

You're a "try anything once" kind of person. Also see number 4 for J.Lo acting appreciation.

You can't sit with us. Jokes. You basically are the zeitgeist. If you had to pick one Sex and the City character for your personality it would be Liz Lemon.

You have the best intentions, you really do. But you still haven't figured out what the right "mood" to be in when you decide to watch a documentary like this is. Probably because you have never felt said mood, meaning the timing is never right. You're just full of excuses, aren't you?

You're not a quitter. You're not willing to give up on ensemble cast rom-coms, so why would you give up on anything else?

Congratulations, you're the worst person I've ever heard of. You're definitely very basic, and I bet you still say things like "That's so gay" when you're trying to call something "dumb".

You use your mom's HBO Go password and you're obsessed with The Jinx. You're probably also still a massive Serial fan even if though turned out to be shit at the end.

You're just trying to keep that Jack Black School of Rock dream alive.

Your love life is all or nothing. You're excessively dramatic and whenever you have intense conversations you try to have them facing a window, with your back to the other person. You get annoyed when other people want to have conversations facing one another, because that doesn't feel very cinematic at all.

You love watching cooking reality TV, and you definitely have a soft spot for meandering indie movies. You're probably also a bit of a homebody that likes doing stuff like gardening and craft but always while drinking very nice wine. Yeah, you're a total yuppie, and deep down everyone's a little bit jealous of you.

There's a bong where your life should be. And you (paradoxically) think Shia Labeouf is a bag of dicks.

You're thirteen. At least I hope you're thirteen. Otherwise you're probably single, your mattress doesn't have a bed frame, and you regularly eat cereal for dinner, AMIRITE OR AMIRITE?

You're super camp and kind of gauche but in a really compelling way. You hate Christian Bale and Christopher Nolan's glum Gotham and hanker for the days of gaudy costumes and ridiculous dialogue from the Tim Burton glory days of Batman.

Your favorite thing to do is yell "TWIST!" when things in your life go unexpectedly.

You, like everyone else on the planet, just want to support Joseph Gordon-Levitt, because what monster wouldn't?

You appreciate the beauty in ugly things. You're also probably very silly and fun, and now refer to all bouncers and security guards as "coolers" because you just can't even. You'll take a Bud tallboy and a shot, thanks.

You've somehow totally romanticized the way you remember Kevin Smith movies from the '90s. (Spoiler alert: Most of them really don't hold up.) Meanwhile, you don't care, and still throw down lines from Mallrats in conversation as though everyone else remembers them as well as you do.

You're kind of beige.

You definitely wear/have worn high waisted slacks, and you believe in divorcing an artist's work from their "personal life".