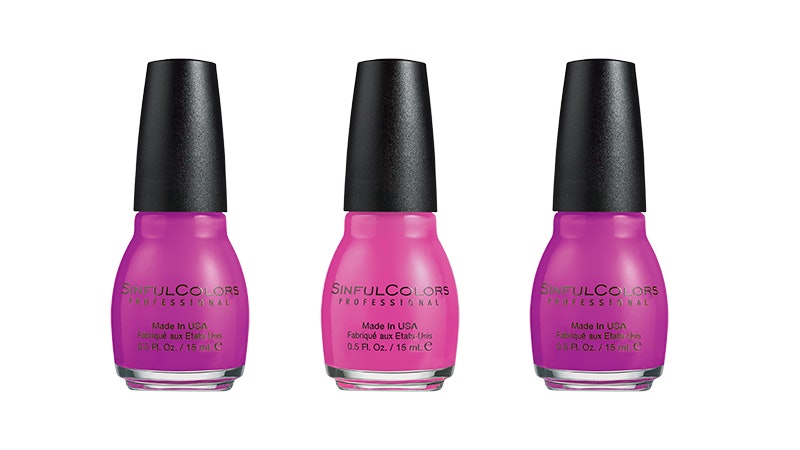 Just when the Internet had gotten over #TheDress, it has given us yet another mind-bending puzzle to seriously mess with our brains. A woman on Twitter posted a photo of two pink and purple nail polishes and a shoe in the same color palette, asking her followers, " Which color nail polishes matches #theshoe?" As a result, social media has erupted into a full-blown debate about what polish goes better with the pink-purple heel in question. However, what I really want to know is where can you buy the nail polishes in the viral nail polish match test, so that I can figure this question out myself IRL.

If you haven't taken a look at the shoe yet, take a deep breath and examine the photo. If you said the left, more purple-hued nail polish, you're with about 50% of the general public. If you're going with the right, more pink-ish nail polish, you're with the other half. Because yes, folks - everyone is split right down the middle, just like it was with the black or gold dress that was so divided, it practically drove friends and families apart.

Yes, both nail polishes, while appearing to be different shades, are labeled "Dream On." They do, however, differ in nail polish numbers, which leads me to believe they came from two different batches. Still, they were given the same name, so shouldn't they be the same color? Or maybe they are, and that's why we're even having this conversation in the first place?!

What have we learned? Yes, they're both from Sinful Colors and the shades are both "Dream On," apparently. That's pretty much the only thing I can be certain of, because God knows I can't figure out which shade goes better with this damn shoe.

If you'd like to go fetch your own color-changing nail polish, you can purchase your very own bottle here. (Sinful Colors Nail Enamel in Dream On, $1.99, riteaid.com)