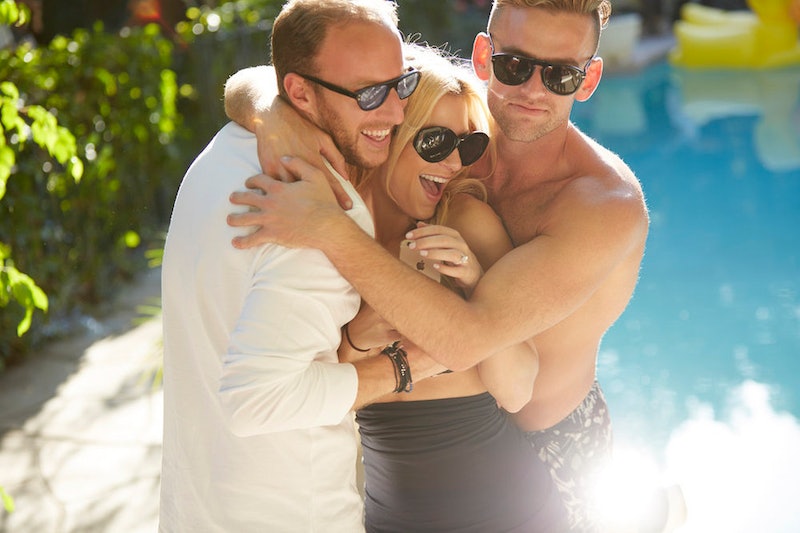 I may be an episode behind on True Detective and still haven't started Season 2 of Halt and Catch Fire, but somehow I never miss Rich Kids of Beverly Hills. Whether that's because the episodes are short or because it's so addictive, I don't know. But what I need to find out is will there be Season 4 of Rich Kids of Beverly Hills ? Well, there's really no way to know. Season 3, which is airing right now, was only announced in April, just a month before the premiere. Why? I don't know, because I would have appreciated more of a heads up that my summer TV viewing schedule was going to have to make room for Rich Kids.

The show's many fans only had a month to prepare for the impending arrival of Morgan Stewart, Dorothy Wang, and the rest of their friends. Though I guess when your primary mode of communication with your fans is via Instagram, it really only takes a second to let them know how to set their DVR.

But, even though they might not give us much notice, I can't lie — I really hope there's another season for Rich Kids. There are plenty of fantastic reasons why even this show deserves a spot on E!'s schedule.

1. There's Only Eight Or Nine Episodes Per Season

Each season is over in two months or so which makes it the perfect bit-sized morsel of fabuluxe.

2. They Travel In Style

Imagine flying in something so fancy you'd feel really bad for spending the entire trip throwing up in a bag. I like living vicariously through these stars.

3. Their Eyewear Is Fabulous

Obviously these guys are decked out in designer gear from head to toe. But even the most expensive outfit can be ruined by cheapo sunglasses, but you'd never catch anyone in this cast in anything less than Prada or Tom Ford. Oh, to be them.

From getting grossed out by authentic Chinese food to shouting in a Mexican restaurant over itemizing their bill, these Kids never behave politely. Even though rich people are supposed to be classy, it's nice to know that there's nothing they know that the rest of us don't.

6. They've Missed Out On So Many Normal Experiences

On the July 5 episode of Season 3, the Rich Kids could barely hold it together for the length of a London bus tour. Of course, bus tours are the actual worst. But, the fact that they couldn't handle quietly and politely being bored makes a larger point: They've never been on a boring school trip or family vacation while a poorly-paid tour guide drones in a barely comprehensible monotone. How can you not want to watch that kind of entertainment?

When she called out Brendan's friend Saachi for wearing a cutoff denim jacket, I actually laughed. They're funny in the way the scariest popular girl in your high school was always funny — mostly because she's honest, a little because she's clever, and the rest is pure meanness.

As much as the Fantasy Boy/Girlfriend is a staple of "If I Was a #Rich Kid" daydreams, it's nice to remember that even with millions of dollars, dating is still the worst.

9. It Really Shows How Dumb It Looks To Take A Selfie

Because Season 4 of Rich Kids of Beverly Hills means hours and hours of selfie footage, which is like aversion therapy for selfie taking because on TV it just. Seems. So. Dumb. Mostly because without Rich Kid professional makeup jobs, the contour just does not happen, but also because living through an iPhone 6 Plus screen is a little embarrassing. But, you gotta love watching it all go down.