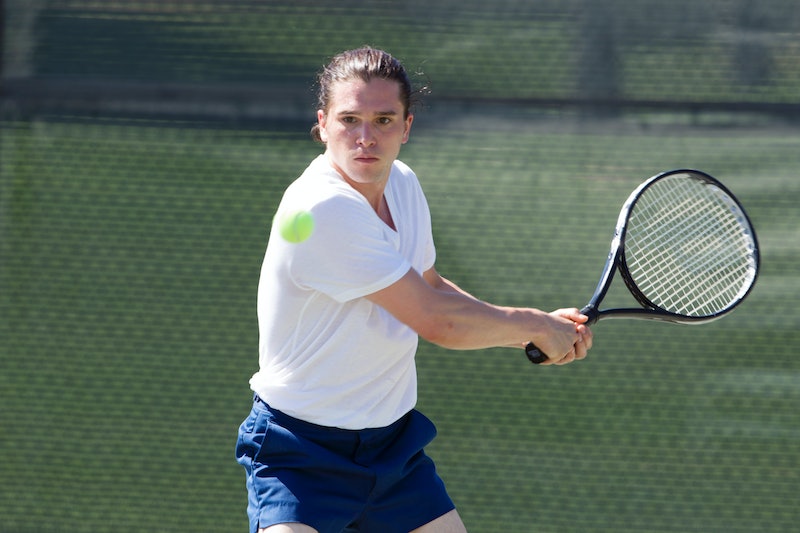 If you have HBO GO, you can already watch HBO's newest original movie, 7 Days In Hell , Andy Samberg's tennis mockumentary. But, if you're about to click "play," hang on a minute — because you need to be prepared to see Kit Harington playing a character other than Jon Snow, and that will be a very emotional journey. Whether you're a "Jon Snow is alive" truther or a "Jon Snow is totally dead and gone forever" truther, there's no denying that Kit Harington IS Jon Snow. Or, at least, Pompeii wasn't enough to dislodge the impression that, in real life, Harington knows nothing, pals around with a wolf, and is never caught without many layers of protective outerwear.

The whole cast of 7 Days In Hell is filled with a mix of comedians, real athletes, and a couple of regular actors. But, casting Harington as Samberg's challenger and rival in a tennis final that goes on for a week (which explains the title) was an inspired piece of casting. Still, all obsessive GoT fans have to start the process of coming to terms with the fact that Kit Harington can't play Jon Snow forever — hey, he might even be done with the show already (*sob*). Hence: This emotional roller coaster. By the end, you should be ready to watch 7 Days In Hell.

That's not him. It's simply another British actor with a face that resembles an innocent pet bunny. So weird that Kit Harington has a doppelganger in Hollywood. Ha, ha!

OK, so maybe the premise of this film is that the space/time continuum has shattered, allowing HBO characters to move among the network. Right now, the Girls are visiting Silicon Valley, while John Oliver tells jokes about President Selina Meyer. Yeah, that's right.

Look, this must just be HBO's reaction to Jon Snow's popularity on Game of Thrones. They'll be letting Kit Harington pop into every new show or movie. It's just smart financial planning.

This is a travesty. He's not playing Jon Snow. Jon Snow doesn't play sports. This is Kit Harington playing a different character.

Stage 6: Obsessing Over His Hair

Spring and Season 6 are basically a year away. We will never see Jon Snow again. Life is empty and full of disappointments.

Stage 8: Pledging Your Life To The Night's Watch

That's the only alternative, right?

As you finish reciting the oath of the Night's Watchmen, a feeling will wash over you. That feeling is embarrassment. Being a hard core TV fan is learning to live with change. And, hard as it is, one of those changes is accepting that Kit Harington will be in different roles than just Jon Snow. Okay, now you are adequately emotionally prepared for 7 Days in Hell. And, is it possible that he actually looks better with no beard?

More like this
'Games of Thrones' Fans May Recognise This 'Conversations With Friends' Location
By El Hunt
The 'Hocus Pocus' Sequel Finally Has A Release Date & It Makes Total Sense
By Shannon Barbour and Radhika Menon
What Does Doctor Strange’s Third Eye Mean?
By Arya Roshanian
Elizabeth Olsen's Chris Evans Friendship Update Was Accidentally Hilarious
By Grace Wehniainen
Get Even More From Bustle — Sign Up For The Newsletter