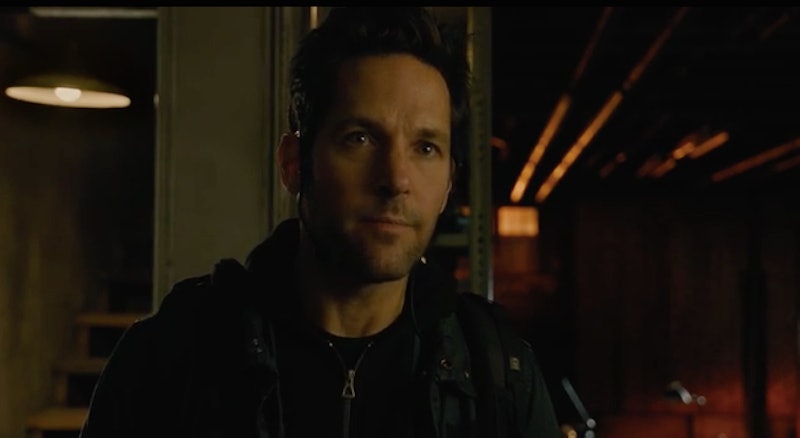 As much as it feels weird to admit it, I'm psyched for Marvel's Ant-Man to hit theaters, since previous trailers assert that even the Ant-Man himself finds the name side eye-worthy. All things considered, though, Marvel knows what they're doing when it comes to super hero films, and honestly? I'll watch anything that features Paul Rudd as a hot single dad. That includes this brand new clip of Ant-Man that seemingly taps into the origin story of the film. But, if you're not like me and already excited about this movie, give the clip a chance — what it reveals about the film is likely enough to make you queue up outside your local movie theater before this film is released.

In the clip, we get the sense that protagonist Scott Lang isn't a squeaky clean, Captain America-type. We know already that the dude is a burglar, and, based on his handiwork here, he's a damn good one. And that resourcefulness! He really has that MacGyver thing down pat, you know what I mean?

However, he stumbles upon something that isn't gold, or money, or worth any distinct value — and I somehow get the sense that his days of committing crimes are soon-to-be over.

So, what does the clip reveal about the movie? A few things...

1. Scott Lang has extensive knowledge about different kinds of steel.

Particularly the kind of steel that they apparently had on the Titanic.

2. Scott Lang also has co-workers in the burglary business, who don't really have the same knowledge of Titanic (like, the movie).

Technically the iceberg didn't kill Leonardo DiCaprio. I mean, it inadvertently led to the ship sinking, but that dude froze to death in the ocean. Anyway, I'm assuming their job is mainly to drive the get-away car.

3. Just kidding, this Russian guy seems to be on top of his Titanic knowledge.

That's right, dude, the iceberg didn't kill Rose — she got to live a beautiful, full life.

4. Apparently, a great way to destroy steel is to freeze it.

I wish I knew tricks like this when I was trying to break into my crush's locker in middle school.

5. Oh, and you know what's affective against explosions? A comforter.

So, next time you try to pull off a jewel heist, stop by your local home supplies store beforehand.

6. This fancy-schmancy suit is what's hidden behind that door.

WEIRD. Scott dismisses it as an old motorcycle suit, but I have a SNEAKING SUSPICION it might be something more...

7. Scott steals the suit, despite deeming it worthless.

WHAT COULD THIS POSSIBLY MEAN?

Check out the clip below. Ant-Man hits theaters July 17.