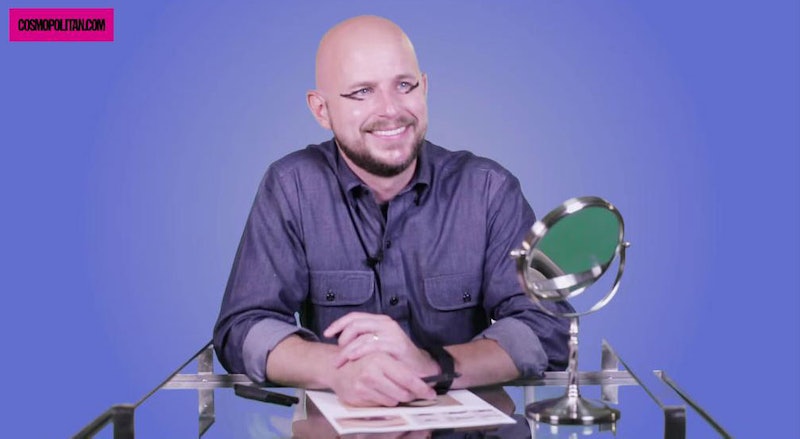 A majority of the male population will never understand the ways of beauty products, let alone make any sort of attempt to use them. Cosmopolitan recruited four men to try applying eyeliner, daring them to master the cat eye technique, a cosmetic art form that even women, more often than not, struggle to perfect. A lot of practice eventually makes perfect when it comes to developing fancy makeup skills, so its no surprise these guys could have used a few pointers.

Considering a significant chunk of his girlfriend's career revolves around beauty and the fact that he grew up with two sisters, my boyfriend is at least aware of which makeup serves what purpose. In terms of how it's applied, I'm sure after his occasional moan and groan over my lengthy routine, he's got the general gist of how I apply my liner. Having him give it a try on his own would definitely be entertaining to watch.

In my opinion, the most hilarious part of this whole video is most of the men's reactions were probably similar to every woman's initial response to learning the ropes of eye makeup. It's no small feat, ladies and gents, and these four learned that lesson firsthand.

Check out a compilation of each man's reaction during their attempt to perfect the cat eye, and I dare you to tell me their comments were not what you were thinking your first time having a go at the technique.

"Nope, already got it on the nose."

2. When You Try A New Product

3. When You're Feeling Sensitive

"My eyes are already watering."

4. When You Just Know

5. When You Talk Yourself Through It

7. When You Start To Think About The Pros

"My respect level just went through the roof."

8. When You Think About Real Cat Eyes

"Who looked at a cat and was like 'its got sexually appealing eyes?'"

9. When You Finally Finish