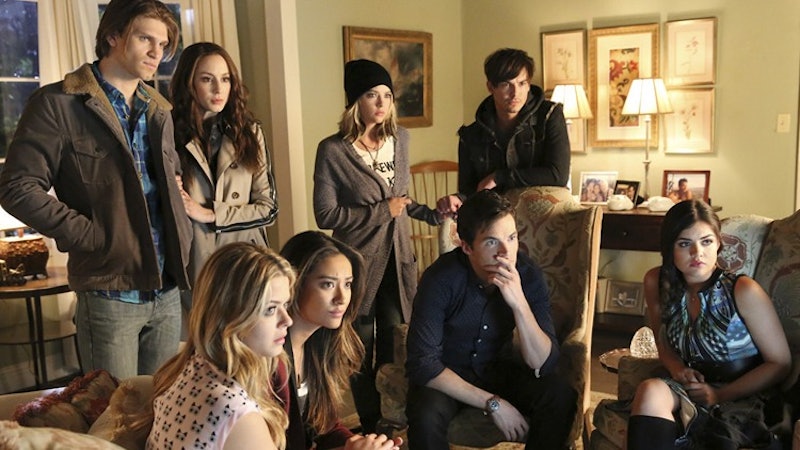 We're only a few episodes away from finding out A's real identity on Pretty Little Liars, and this time, we're not just getting a name. A may call himself Charles DiLaurentis, but viewers still have no idea what the girls know him as, or if he's really the long-lost brother of Alison and Jason. The crazy mystery is enough to put any fan in the fictional Radley Sanitarium — it's just that there is so much information out there about A's identity, but the puzzle pieces don't always seem to fit together. I'm sure many of the Pretty Little Liars hints fans have discovered over the years will make a lot of sense when the Season 6A finale airs, but, until then, viewers remain desperate to put together this overwhelming puzzle.

But, maybe question we should all be asking ourselves isn't how to solve this puzzle, but instead if the puzzle pieces all even fit together.

I'm not so sure the latter question's answer is a "yes." Don't get me wrong: I don't think that the Pretty Little Liars writers are wasting our time with meaningless clues or anything like that. Instead, I think that some fans pick up on certain things and latch onto them with dear life, when, in reality, these so-called "clues" are nothing more than red herrings.

So what clues might not matter in the grand scheme of things? We won't know until A is officially revealed, but I'm thinking that it might be okay to walk away from these ideas:

1. Anything To Do With Shana

We know that Shana isn't actually A — in fact, the real A threatened Shana and told her to get out of Rosewood. Shana seeking revenge on Ali for blinding Jenna was definitely a threat at the moment, but I'm not so sure that Shana ever knew about Charles or any major player in the whole A game. Even if she did, she was probably a very small pawn in a much larger game — and probably isn't someone who ever held big answers.

This one is a little tricky, because I do think that there's some connection between Toby's mother and the overall mystery — I'm just not so sure it'll lead us to A. There is a chance that Bethany was the one who pushed Toby's mom off the roof or that she witnessed her accidental fall, but I think that the only reason why A brought up her death to Toby in the first place was to use it as leverage to get him to stay loyal to the A team. As for the theories that Toby's mother was Mrs. DiLaurentis' sister, or another relative of the family? I'm not buying it.

I understand why some people think that Maya is still alive and working as A: there are plenty of weird connections that suggest that her story isn't done yet, including the fact that Radley Sanitarium is an anagram for "Maya R. DiLaurentis." It would be a mind-blowing twist, but I'm not so sure that Pretty Little Liars would bring back a character that died over three seasons ago — especially a character whose murder was a major arc for half a season.

4. The Jenna And Sydney Thing

When Jenna and Sydney first revealed that they were in cahoots, I was convinced it had something to do with the A team. Instead, they seemed to join forces to help take down Ali, whom Jenna was convinced was the ultimate enemy. The "take down Ali" task force seemed to dissipate, and with Jenna being mostly MIA from the series, it doesn't seem like there's a great reason to incorporate Sydney and Jenna back into the main storyline.

I had plenty of fun watching Ravenswood too, but I don't think that the short-lived spinoff revealed that much about the Big A mystery.

6. Anything About Aria Being A

Yes, I know that Mona calls Aria "big A" in the above clip, but I also firmly believe there's no way the writers would make one the liars themselves the ultimate villain. Logically, it's impossible — not to mention, it would be a huge slap in the face to fans who rooted for Aria this entire time. There might be a show in which Aria has multiple personalities and is secretly a sociopath who goes by the name of A, but this is not that show.

There may be a lot of subtle hints embedded deep within Pretty Little Liars, but I think it's safe to say that not everything has a deeper meaning.