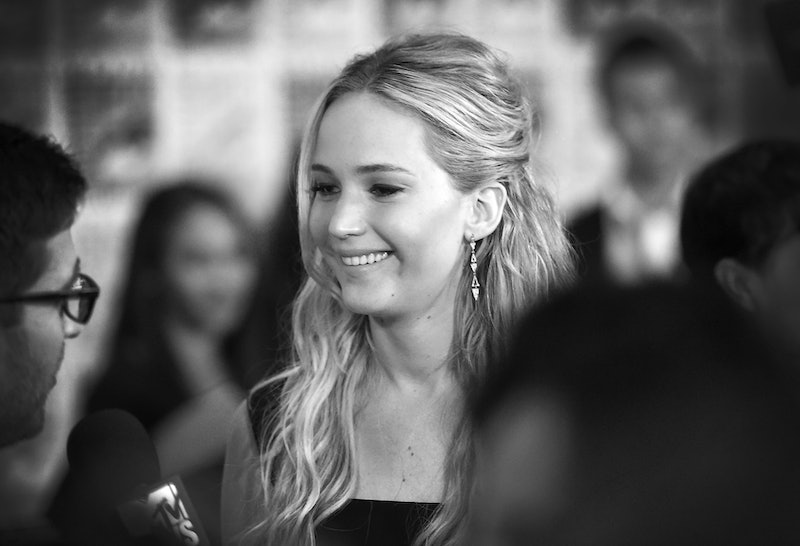 Seeing as how she's been all over the fashion industry's radar lately, it comes as no surprise that Jennifer Lawrence wore Louis Vuitton to Comic Con this year. Can you imagine how epic it would've been if she cosplayed Katniss Everdeen, though? Anyways, she probably would've been stopped like a million times on her way to the The Hunger Games: Mockingjay Part 2 panel, so perhaps wearing a long black Louis Vuitton dress was the better idea.

Her dress has two side cutouts, a straight neckline, and straps that held the torso piece to the rest of the dress. The classi number is from the LV resort 2016 collection, and she paired it with some black, strappy Christian Louboutin shoes, complete with his signature red undersoles. Her mani and pedi were also a deep, rich red, which matched her heels.

Lawrence kept her accessories to a minimum and only wore a simplistic Arya Esha ring and a bangle from Graziela Gems along with straight, dangling earrings from the same brand. Her hairstyle was very boho-beach chick because she wore a short middle part with super loose waves that pinned back into a princess style. Out of her entire look, I have to say I love her makeup the most because Lawrence was looking fab with her all natural look, a nice vaction from her usual smoky eye.

Doesn't she look great in nudes and natural makeup? And that lip color! Considering she's the face of Dior Addict's upcoming line of fall lipsticks, there's no surprise that her pucker is on point.