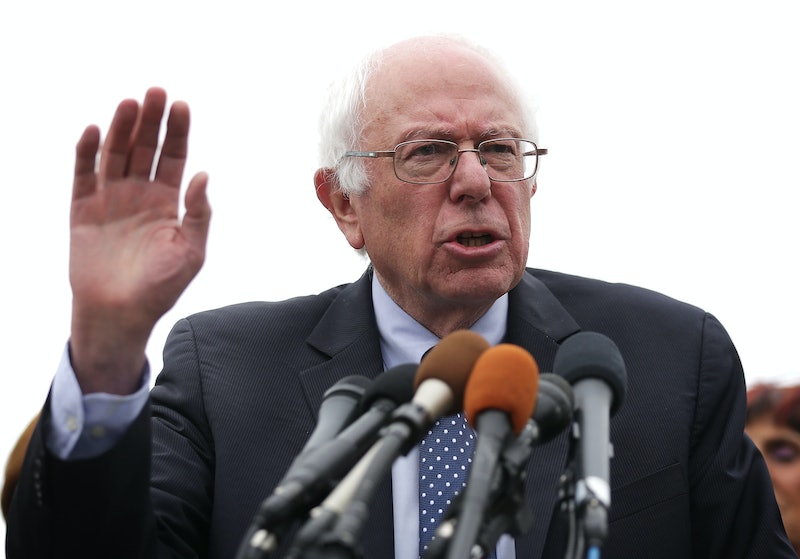 It's no secret that the word "feminist" is still scary to a lot of people. It's a word that's often absent from the political rhetoric of American politicians — that is, unless your name is Hillary Clinton. Most politicians and people in general are far more comfortable claiming to be supporters of gender equality than they are, feminists, though the two are the same things. At this point in the race, the Vermont senator has made it clear that he's passionately supported sexual, racial, and economic equality all his life, inspiring many to wonder if Bernie Sanders is a feminist. Sanders has never called himself a feminist — but does that mean we can't?

Not all feminists even realize that they are feminists. After all, the term "feminist" itself only surfaced in America in the late 20th century, and although the term has increasingly found its way into pop culture, myths about what the word and the movement encompass are still widespread and misleading. In simple terms, a feminist is someone who believes in the unconditional equality of people of all races, religions, gender identities, sexual orientations, and socioeconomic classes. Feminists believe all human beings should be entitled to the same rights and that the government should empower everyone with the ability to make their own peaceful lifestyle choices. Feminist politicians address more than reproductive rights: They delve into male privilege, gender roles, and even rape culture. Can we consider Bernie Sanders one of them?

Bernie Sanders has rightly received criticism for not explicitly addressing racial issues in America beyond how economic inequality disproportionately affects people of color, as CNN reports. However, what Sanders' words have merely glossed over, his long, inspirational history of supporting civil rights absolutely confirms.

Sanders has been passionate about racial equality since the 1960s, when he was once arrested for protesting segregation. In college, he was a coordinator for the Student Nonviolent Coordinating Committee (SNCC). The SNCC often collaborated with Martin Luther King, Jr. to protest segregation and structural racism. According to his campaign website, Sanders was also an officer of the Congress of Racial Equality (CORE), and led sit-ins to protest off-campus housing at the University of Chicago. Sanders' current support of marijuana legalization could also be interpreted as an effort to help the African Americans and Latinos disproportionately persecuted by racist law enforcement.

Bernie is also a vocal supporter of DREAMers. He supports immigration reform, and has spoken candidly about the plights of immigrants:

[They] have been routinely cheated out of wages, held virtually captive by employers who have seized their documents, forced to live in unspeakably inhumane conditions and denied medical benefits for on-the-job injuries.

It's worth noting that Sanders' activism for racial equality began long before his political career did. It's a lot easier to believe that in his 20s, the current presidential hopeful was a young man who sincerely believed equality was worth fighting for. He meant for his involvement in the civil rights movement to create lasting change, not just be used as leverage to attract the minority voting pool. Sure, I think it would be great if Sanders expanded on his history a little bit more, but at the same time, I think the fact that he doesn't boast is pretty telling of his humble, genuine character.

With conservatives using the term "religious freedom" to pass off all kinds of veiled offensive bills, the words put together are now pretty scary. But religious freedom, in an entirely different context, is important to feminists too. We believe that religion and government should be separate entities, and that people should be able to make their own choices concerning what religion they choose to practice. Which means what you do with your body and who you're allowed to marry shouldn't be dictated by a religion you don't even practice. Ultimately, you're entitled to your own views about literally anything, but once those views affect how you treat others, that's where feminists draw the line.

In June, although Sanders told the Christian Science Monitor that he isn't "particularly religious," he's also spoken about how his observations of religious freedom (or lack of it) in history were largely what steered him into politics in the first place:

It's also certainly interesting to note that Sanders would be America's first non-Christian president, and his victory could prove that religion no longer has a decisive place in American politics.

Sanders has a pretty colorful history when it comes to gay rights, too. In 1984, he participated in a gay pride march in Burlington while he was mayor, and in 1985, he declared June 25 Lesbian and Gay Pride Day in the city. Sanders also referred to gay rights as a "human rights issue is of great importance to our community." In 1996, Sanders was among a minority in Congress who opposed the Defense of Marriage Act, which defined marriage as "a legal union between one man and one woman." The Human Rights Campaign (HRC), an organization working for equal rights for the LGBT community, rates elected officials on their LGBT rights stances, and currently gives Sanders a score of 100 percent.

LGBT rights are often where people draw the line between Clinton and Sanders. Many of Clinton's critics point out that throughout the '90s, during her 2008 campaign, and as late as 2013, she opposed marriage equality or had some qualms with full LGBT rights. These critics aren't being very fair, as, over the course of eight years, you learn and experience a lot of new things that certainly change your mind on issues, and Clinton has demonstrated very vocal support for LGBT rights throughout 2015. However, Sander's decades-long commitment to gay rights should certainly be respected and appreciated.

Defending the middle-class, improving conditions for low-wage workers, and fighting the uneven distribution of wealth in America are all things Sanders has passionately promised to tackle. Economic equality is a lot more connected to feminism than most people think. When you consider how decades of discrimination in both work and education have disproportionately affected, well, literally everyone but heterosexual, Anglo-Saxon white males, improving labor conditions and enforcing workplace equality are serious feminist goals. Sanders is also a vocal supporter of the Fight For 15, meant mostly to benefit fast food workers; it's worth noting that the fast food industry is dominantly female.

Many draw another line between Sanders and Clinton, here, pointing out that while Clinton's top 10 campaign donors are allegedly big banks, Sanders' are labor unions. However, to be fair, Clinton has vocally expressed support for an increased minimum wage and increased taxes on the rich for quite a while now, too.

Sanders' admiration of the Democratic-socialist governments of Denmark and Scandinavia is also worth noting in a feminist context. Both nations provide comprehensive family leave policies that Sanders fully supports. Ultimately, when you consider how America's aggressive war on any government that wasn't pro-capitalist throughout the Cold War affected Asian, African, and Latin American nations, the presidential hopeful's support of some socialist ideas reflects that he's willing to look beyond traditional government to achieve equality.

Ever since he became a senator, Sanders has been a loud advocate for women's right to an abortion, and full access to contraceptives. Sanders has consistently sponsored bills to protect women's access to both birth control and safe abortions. In a speech opposing an anti-abortion bill in the video below, Sanders claimed abortion rights were a "basic right" for women, and quite impressively, he wasn't shy about talking male privilege:

And let me add my strong belief, that if the United States Senate had 83 women and 17 men, rather than 83 men and 17 women, my strong guess is that a bill like this would never even make it to the floor.

Sexual violence toward women is an issue that Obama and his administration have done a pretty impressive job addressing, especially on college campuses. Sanders himself received harsh criticism for a satirical essay he wrote in the 1970s. Many of his critics were too fixated on lines detailing how men fantasize about rape, and the line, "[A woman] fantasizes being raped by 3 men simultaneously," to realize the real and very feminist message the essay was trying to emphasize. As early as the 1970s, long before the term "rape culture" was even coined, Sanders already demonstrated a clear understanding of what the issue encompasses. Rape culture is a social phenomenon in which society, entertainment, and the pornography industry teach men to view coercive sex as desirable, and worse yet, that women view coercive, violent sex as pleasurable.

While even Sanders has admitted that the essay wasn't exactly written in good taste, he and his campaign team have also stressed that it was a satirical criticism of sexual values and gender roles in society. To further prove that rape is something that Sanders in no way condones, according to Salon, in 2003, "Sanders was among 32 co-sponsors of the Prison Rape Elimination Act, a measure to 'establish a zero-tolerance standard' for sexual violence in prison." In 2011, Salon further reported Sanders co-sponsored a measure to address the "rape kit," or a means to test DNA evidence in rape cases that police allegedly avoided using.

Sanders' essay regarding rape has been defended as a commentary on gender roles in society; the male and female characters are taught by society to want and feel different things because of their genders. Sanders is also a champion for paid "family leave" instead of just maternity leave, and along with his endearing views on "real family values" that equally involve men and women in child-rearing, it's clear that he favors men and women living on their own terms beyond established patriarchal norms.

Doing Whatever Makes You Feel Comfortable

Sure, feminism has a lot of specific points and covers a wide range of issues, but it can easily be summed up: Feminists support people doing whatever makes them feel comfortable. In a letter to the editor by Sanders in the 1970s, the current presidential hopeful renounced the government's role in "regulating human behavior" and "[imposing] a particular brand of morality and 'right' on people." As for whether or not Sanders is a feminist, I'd like to let an excerpt of the letter speak for itself:

To America's increasingly cynical and disillusioned voting pool, the authenticity of the words a politician says and the causes he/she supports are consistently called into question. This article wasn't at all written with the purpose of promoting Bernie Sanders; the points made were meant to assess not whether Bernie would be a good president, but whether or not he is a feminist. While we may never know the answer to the former, I think it's safe to conclude that yes, for all his sincerity and persistent zeal for equality, Bernie Sanders is a feminist.