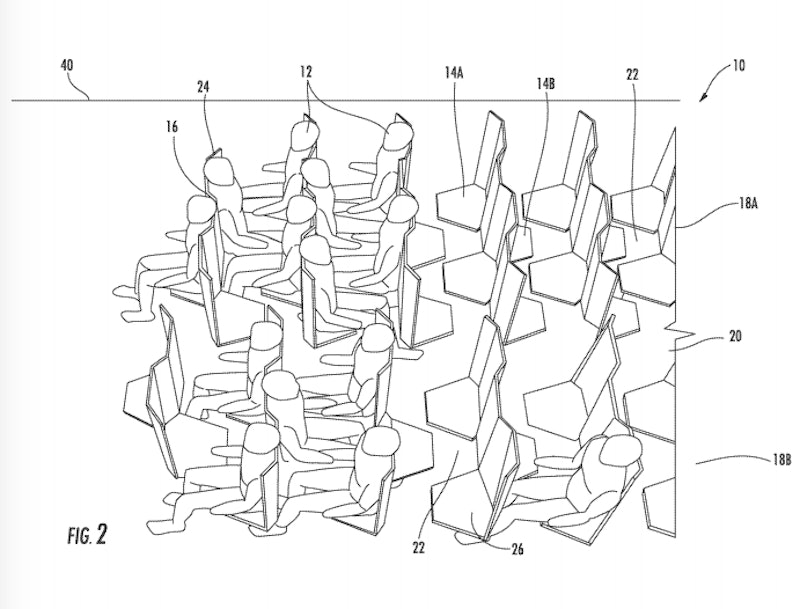 Zodiac Seats France just patented an idea for a new plane seating arrangement entitled "Economy Class Cabin Hexagon" that the Internet has been quick to label a "nightmare." Economy class seating arrangements are less than popular as it is, with fliers' main grievance being the dreaded middle seat. The French industry supplier had a bizarre and, honestly, pretty god-awful idea for making things a little better for economy fliers (or, more probably, upping its profits) and it was — make sure you're sitting down for this — taking away the middle seat! Well, not so much taking it away as rotating it and taking away its arm rests, leg room, personal space, and any possible chance of comfort.

Rows of seats will still be set in three, but they'll be set up in a hexagonal arrangement (hence the name of the configuration). Passengers are then squeezed together into such close proximity as to pretty much force what the Verge very professionally referred to as "rampant butt-touching." Yes, hand rests have pretty much been replaced with fellow passengers' butts, and one look at any of the illustrations included in Zodiac Seats France's patent application completely confirms this. The only thing worse than "rampant butt-touching," forced hand-holding, and what promises to be a lot of uncomfortable, accidental groping throughout is the embarrassing, awkward mess that climbing out of your cabin to go to the bathroom will surely entail.

According to Wired, Zodiac Seats France's official patent application states that its design's primary goal is "to increase cabin density while also creating seat units that increase the space available at the shoulder and arm area." Sure, the design might actually give passengers a bit more upper-body room, but at the expense of a lot of leg room and personal space. Let's also bear in mind that the people you tend to meet on airplanes aren't necessarily ideal, even minus the "rampant butt-touching" and awkward physical contact the seating arrangement pretty much guarantees.

But, hey, on the bright side, maybe it will encourage people to fly together with their families or with groups of friends to avoid hours of being groped by a stranger. Then again, there's a good chance a plane with this seating arrangement will never even be built. As the Verge rightly points out, Zodiac Seats France obtained a patent, which just means they were the first to think of the (terrible) idea. At any rate, it's usually a long distance from patent to prototype that typically involves years of test runs, so if the Economy Class Cabin Hexagon ever does end up seeing the light of the day, let's just hope by then there will be some superior mode of transportation that renders first-class flights substantially cheaper.