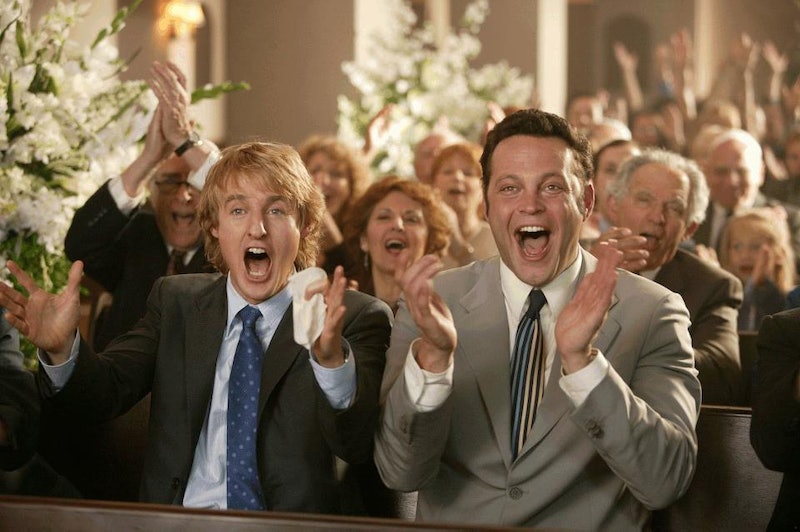 Confession time: I miss the days of Frat Pack dominating comedy movies. Back in the early 2000s, big-screen laughs mostly came from Will Ferrell, Vince Vaughn, Owen Wilson, Steve Carrel, Paul Rudd, and other very talented actors. It's been 10 years since ultimate Frat Pack movie Wedding Crashers was released in 2005 and the steps to successfully crash a wedding are still so quotable. The question remains — do those steps actually work? According to a DVD extra on the movie, there are a total of 110 rules to crashing weddings and each one is vital. I've decided to examine each of six quoted in the actual movie.

After all, Wedding Crashers' famous rules has given us all life mottos ("No excuses. Play like a champion."), absurdities ("Never walk away on a crasher in a funny jacket") and insults ("Rule No. 5: You're an idiot"). If you've forgotten the plot of the uproarious comedy, let me give you a refresher: Wilson and Vaughn play ace wedding crashers who get sucked into a long post-wedding weekend with the family of the bride — and they wind up falling in love with the women they were trying to hook up with, played Rachel McAdams and Isla Fisher. Ferrell also makes a killer cameo, because it wouldn't be a Frat Pack film without him.

So how realistic are these Wedding Crashers rules? Let's look at each of them and see.

Rule No. 1: Never Leave A Fellow Crasher Behind

This is a really good idea. There is safety in numbers, especially when wedding crashing.

Actually, you're more like an edgy risk-taker for trying to crash a wedding filled with partying, free food, and maybe an open bar.

Rule No. 6: Do Not Sit In The Corner & Sulk. It Draws Attention In A Negative Way. Draw Attention To Yourself, But On Your Own Terms.

Pretty sure this is true of any party. This happened to me once and I got blamed for ruining the party from the hosts. The lesson here: Take your issues away from the so-called good times.

Some people are closer to their family than others and thanks to Facebook, we know a little bit more about the latest on our distant cousin's wedding. But it's good to know who's still alive and who's not, due to the next rule.

Rule No. 32: You Don't Commit To A Relative Unless You're Absolutely Positive That They Have A Pulse

Nothing is worse than to have to react to a dead relative's passing when you didn't even know them. Again, keep the occasion happy.

This is a great motto for wedding crashing, as well as life in general. Basically, just do what you need to and go for what you want. Always bring your A-game to everything.