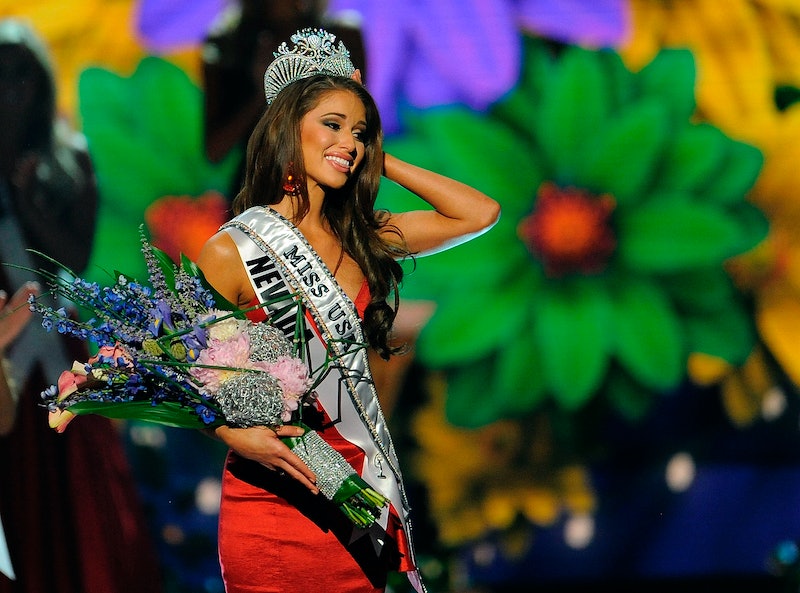 It's been a rough few weeks the Miss USA Pageant after the judges dropped out and it lost its home on NBC. Luckily, just in the knick of time, the pageant secured a panel of new judges to judge the Miss USA Pageant. This time around, the judges who will be selecting the 2015 Miss USA have, at some point, been apart of the Miss Universe Organization. Yes, the new panel of judges consists of former Miss USA and Miss Universe titleholders, according to TMZ. And call me a sucker for tradition, but I kind of love that women who have been on the Miss USA or Miss Universe stage will be the ones judging the women this year, because if anyone knows what those contestants are going through, it's their predecessors.

After Donald Trump’s speech about immigration, in which he referred to Mexican immigrants as “rapists” and “criminals,” quite a few already secured judges dropped out. The former judges include Emmitt Smith, Terrence Jenkins, and former Miss Universe Zuleyka Rivera. So with those three judges out, surely the Miss Universe Organization was scrambling to fill the empty seats. But they did find women to fill the empty seats, so no worries. Here is a run down of the judges of the 2015 Miss USA Pageant, all of whom have been in the current contestants shoes.

Title: Miss USA 2010, representing Michigan. Fun fact: Fakih has been training to be a WWE Diva.

Title: Miss USA 2008, representing Texas. Stewart has appeared in over 100 episodes of the TV show For Better or Worse.

Title: Miss Teen USA 2011, representing Texas. As a winner of the Miss Teen USA Pageant, Doty is the youngest of the nine judges at 22-years-old.

Title: Miss USA 2006, representing Kentucky. Conner faced public controversy when she admitted to cocaine use in 2007, according to People, but was given a "second chance" by Donald Trump.

Title: Miss Universe 1997, representing Hawaii. Until Olivia Culpo in 2012, Lee is the only Miss USA to win Miss Universe.

More like this
Amy Schumer Is Actually The Other Kardashian Sister You Never Knew About
By Jake Viswanath
How Reality TV Stars Conquered Your Bookshelves
By Anna Peele
Kylie Jenner Roasts Kendall For Her Cucumber Cutting Skills On TikTok
By Jake Viswanath
What’s New On Netflix: 'Stranger Things' & 'Somebody Feed Phil' Return
By Arya Roshanian
Get Even More From Bustle — Sign Up For The Newsletter