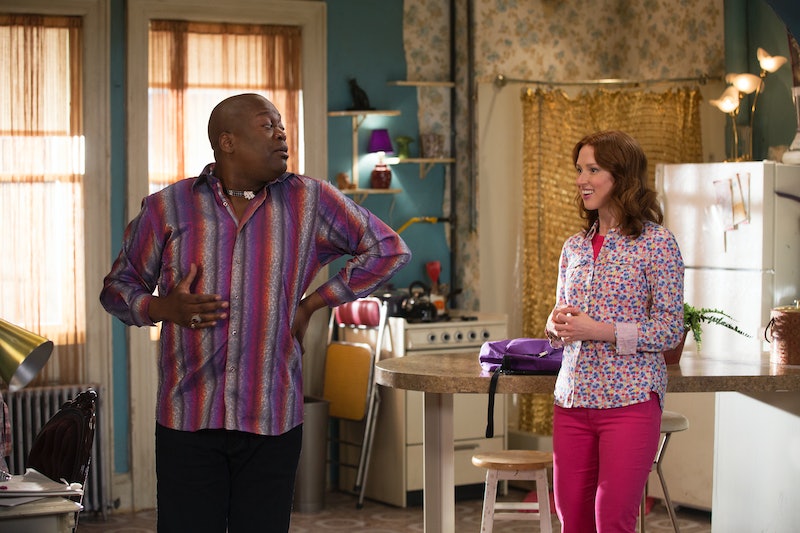 From Sex and the City to skits on YouTube to teen movies, the "gay best friend" is a pretty well-known institution. But according to science, the gay best friend trope might have a basis in reality. A new study reveals that gay men and straight women are friends a lot more than would be expected. But just because there is some truth to the trope, researchers say, that doesn't automatically mean that the often stereotyped media portrayals are OK, too.

In a recent study published in PLOS, researchers decided to examine "the extent to which people relied on same-gender versus cross-gender friends" for support. They were especially interested to see if gay, lesbian, and bisexual individuals conformed to the same patterns for friendship as straight individuals, and whether they had the same tendency toward homophily, aka the tendency to associate with people of your same gender. So they decided to analyze data from a 2010 online survey that polled over 25,000 people to see what patterns they could find.

Despite the widespread idea that gay and lesbian individuals can't be friends with members of the same sex because it would be "weird" (and presumably that bisexuals can't be friends with anyone, I guess?), researchers found that, for the most part, gay and straight participants had similar patterns when it came to friendship. However, one of the departures from the pattern was gay men — and to a lesser extent bisexual men — who displayed "no evidence of homophily." In other words, they were friends with women all the time.

So basically, that whole gay best friend thing does play out in the real world.

But While We're On the Subject:

Of course, that's not really the same thing as saying that it's OK to rely on stereotypes when depicting such friendships. TV Tropes describes the "Gay Best Friend" as it is often seen on television by explaining, "The Gay Best Friend exists mostly to add variety, funny mannerisms, and cheap laughs to an otherwise all-straight story and sometimes show off political correctness," though they do note that more well-rounded depictions of gay and lesbian characters are slowly becoming more common as well. Still, having a gay best friend is often seen as on par with having an accessory, such as when Teen Vogue literally referred to a gay best friend as a "must-have accessory" in 2010, rather than a two-way relationship with a real human being.

As Cooper Williams lamented in an opinion piece in the Stanford Daily in 2013, friendships based in stereotyped ideas about gay best friends "aren’t real. They are friendships in which if I try to open up, as friends do with each other, her eyes glaze over as if she’s wondering 'when will he start saying ‘guuurl’ again?'”

Basically, it's great that gay men are able to find solid friendships with women, but it would also be great if media portrayals of these relationships would also try to depict them as real friendships between real people, not stereotypes. Because gay best friends are great, not because they're gay and therefore entertaining, but because gay guys can be great people and awesome friends. And those are the real reasons to be friends with someone.