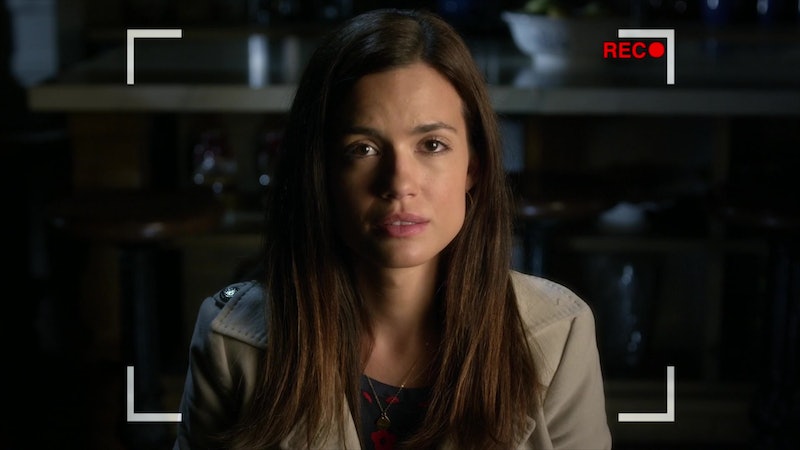 I know we've since moved on to Charles DiLaurentis on Pretty Little Liars, but Black Widow should not be forgotten. She was one of the main antagonists of Season 4 (along with all of the Red Coats running around), and we still haven't discovered her true identity. Just as a refresher, here's a little background on the mysterious character, who is also referred to by fans as Black Veil.

Sketchy? Yes, definitely — but it's also worth pointing out that none of that is outright evil. She's never been linked to any of A's more outwardly violent displays... so it's tough to know who's side she's really on. Besides, showing up at Wilden's funeral looking scary as all heck might even make her a good guy (because we all know Wilden was an absolute mess). Now, just about every character on Pretty Little Liars has been theorized as a potential Black Widow at one point or another, but there's one in particular that really fits the bill in just about every way imaginable... and that person just so happens to be Melissa Hastings. Before we get to all of my concrete proof, check out Bustle's Pretty Little Liars podcast for even more theories.

You know how I mentioned the fact that we don't technically know if Black Widow is good or bad? Well, it's certainly an ambiguity she shares with Melissa — so far, there's little rhyme or reason to BW's actions, but for all we know, she could be trying to protect Spencer. It's by no means a concrete tie, but I thought it was worth pointing out the fact that she could end up being a good guy, and in a perfect world, so could Melissa (I like believing the best in people).

I. Marlene King Has Put A Lot Of Emphasis On The "Black Widow" Nickname

At first the mysterious figure was dubbed "The Woman in Black" or "Black Veil," but after a fan dubbed her "Black Widow," King was quick to jump on board. Many see this as a fairly concrete clue referring to Melissa — after all, she's the only (known) widow on the show

I mean, check out all those caps:

Just IMK yanking our collective chains as per usual, or a bona fide clue?

Melissa Has A Lot To Lose

As Redditor makomania points out, Melissa's complicit in burying someone alive as part of a cover-up — so if anyone's in need of a threatening, slightly omniscient, and above all mysterious, alter-ego, it's her. Plus, if you think about it, A might even be blackmailing her to act as Black Widow — you never know.

Melissa Is No Stranger To Theatrical Ensembles

She Literally Fits The Profile

We don't know much about Black Widow, but we know that shares a similar silhouette with Melissa. Body type is not much to go off, but at least it eliminates the possibility of a particularly short Black Widow.

A great A-team, perhaps? Wren has long been one of the top contenders for Big A, as described above, and it would make sense if he and Melissa were working together — that would be a great twist, no? Think of how heart-wrenching it would be for Spencer!

I'm pretty convinced that we'll see the return of Melissa on Pretty Little Liars soon, and the reveal of her secret alter ego soon after.