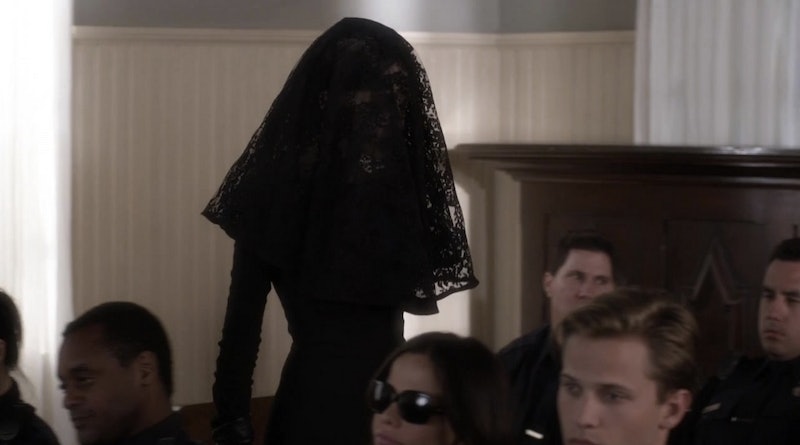 You probably feel like you don't have enough room on your plate to worry about another Pretty Little Liars mystery — it's only been a few weeks since the Big A Reveal, after all. Well, make room because, while worrying about who Charles DiLaurentis is on PLL is definitely important, there's another big fish in Rosewood that we still need to put a name to. From where the Season 5 finale left off — you know, by hardly answering any of our big questions — and the clues I Marlene King has dropped over the past five seasons, it's clear that we should also be asking: Who Black Veil is on Pretty Little Liars ? And, more specifically, could Ashley Marin be Black Veil?

Are you scratching your head and trying to remember who the hell Black Veil is? Don't worry, you might have forgotten all about the mysterious character while you were trying to figure out how in the wide world of Rosewood Sara Harvey and Bethany Young still fit into the A-game. (Seriously, when are we going to get answers as to why these two are relevant?) But you're going to have to factor this person in eventually because, not only are they important, but I Marlene King confirmed that Black Veil is a part of Uber A's plans back in 2014. And we all know how these things come full circle (cough the Campbell Farm and the lighter from the lodge fire).

In case you've actually forgotten, Black Veil first appeared in the Season 4 episode that had the Liars attending Detective Wilden's funeral (RIP). Well, it was the character's first appearance with their face covered. In the same 2014 interview where she confirmed that Black Veil is one of Uber A's inner circle, King also confirmed that we saw this person in Season 4 without their veil. That's right, just like Charles, we've seen Black Veil's face and we probably know who they are, so now we just have to whittle down the suspect pool. Which shouldn't be that hard, right? That's every PLL fan's famous last words before searching for clues drives them totally mad.

There are a lot of internet theories about Black Veil's identity that call out everyone we've met on the series from Alison to Sara Harvey. But one theory seems to hold a bit more water than others — Tumblr and Reddit users believe that Ashley Marin could be Black Veil. And, unlike some of the PLL theories out there, there's plenty of reasonable evidence that supports the idea aside from the fact that Ashley fits Black Veil's very distinct body type.

When you think about it, considering the sheer lack of parental figures in Rosewood, Ashley Marin is one of the only parents that is consistently involved in what goes on. There was her relationship with Wilden (before he died, obviously), she was framed by A for Wilden's murder and went to jail, and there was that time she saw those creepy twins. Ashley's the only parent in Rosewood that's been repeatedly dragged into the A-Game. So, it would make perfect sense that she's more into the game than we knew.

At the time of Wilden's funeral and the appearance of Black Veil, Ashley was supposed to be in New York — well, we all know that she never went. So, where was she? And why didn't she tell her own daughter that she wasn't going to be away? Probably because she had infiltrated the game through her relationship with Wilden — who, if you don't remember, was involved with Alison — and showed up at his funeral in a disguise.

Reddit user AuchnotOuch points out that, while Black Veil is an "endgame" character, that doesn't necessarily mean that they're a bad character. And, considering what we learned from Toby's brief turn in the black hoodie, it's entirely possible that Ashley Marin has infiltrated the A-Game with entirely good intentions. Let's not forget how brilliant this woman is and the fact that she's capable of her own illegal activities (Remember what she kept in the lasagna box?). If Ashley Marin could fool her boss a the bank into believing that she wasn't stealing from her job, she could easily fool or thwart A. But there's more here than just the idea that Ashley's become something of a vigilante in Rosewood after learning — through her extremely weird relationship with Wilden — that her daughter and her friends were being tormented.

A's currently in possession of the Black Veil outfit and, allegedly, the mask that the character wore under the veil. If we've learned nothing from the past five seasons of this series it's that A doesn't strike until they're entirely ready and entirely prepared to do major damage. If A realized that Ashley knew about these activities (AuchnotOuch believes that this particular Ali mask got burned when Ashley wore it to rescue Hanna from the lodge fire), it's possible that the villain is slowly waiting to punish the only Rosewood parent that might've attempted to stand up to their game. Think about it, people, Hanna was the first Liar to follow Ali to jail and, while everyone's been tormented by A, Hanna also found her name on A's storage unit and the ultimate evidence vault. That can't be a coincidence.

This might be a totally optimistic approach to believe that Black Veil isn't an evil mastermind that's helping to carry out A's plans, but it would honestly make sense. Ashley might be out of the game now that her disguise has been confiscated or discovered by A and Hanna's ultimately going to pay the price for her mother getting involved.