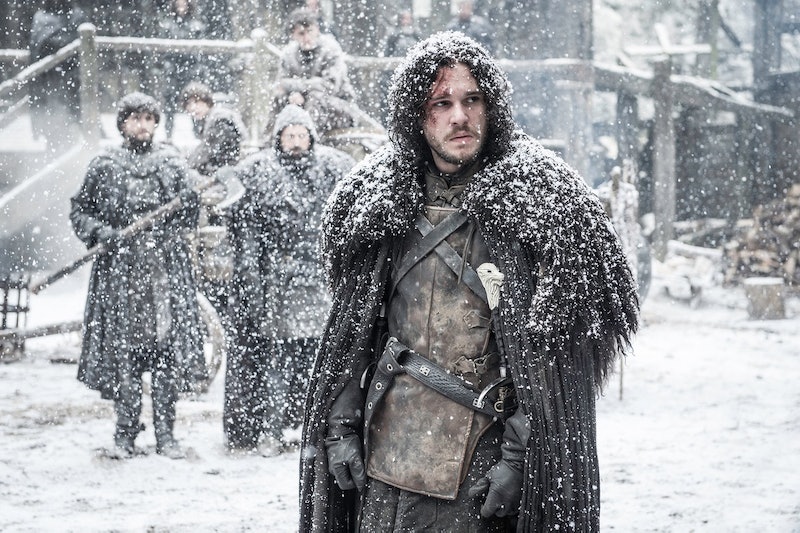 ICYMI, select members from HBO's Game of Thrones served on a panel for Comic-Con Friday, July 10, to answer questions about Season 5, which offered what was arguably the most jolting finale in the show's history. Remember how (SPOILER ALERT) the Night's Watch got all blade-happy and stabbed Jon Snow about 800 times before our beloved steward fell into a pool of his own blood? My heart wrenches just thinking about it. While Jon had all the familiar symptoms of someone who had just died by the end of the scene, throngs of fans have refused to believe that the finale was meant to be his swan song. A majority of the panel was spent discussing things other than the paramount "death" scene, but the topic was finally addressed near the end of the discussion — THANK GOODNESS.

Episode director, David Nutter, recalled a discussion with President Barack Obama, who is apparently an avid fan of GoT as well as Jon. When the President verbalized a thought that has been plaguing all our respective psyches by asking Nutter, "You didn't kill Jon Snow, did you?" the director offered a macabre response. "Mr. President, Jon Snow is deader than dead." Laura Prudon of Variety subsequently tweeted that it was also revealed during the panel that, "The Red Wedding is President Obama's favorite episode, and he complained to Nutter that they always kill his favorite characters." Preach!

Before you begin sobbing over the Season 5 finale all over again, I would like to state right here and now that it is my firm belief that Jon will return to GoT. Do you doubt me? Let's look at some evidence...

The President Wants Jon To Come Back

Are you really going to deny the POTUS more Jon story arcs and bravery? I think not.

Emilia Clarke Did Not Attend The Panel

Emilia Clarke did not attend the panel, and the actress previously admitted she is a "terrible liar." The team probably asked her to forego the appearance because she would TOTALLY LET IT SLIP THAT JON IS NOT DEAD.

Kit Harrington Wasn't There, Either

Jon's portrayer, Kit Harrington, was also absent from the panel. I'm just going to assume that he is bad at lying as well and would have blurted out "I'M COMING BACK FOR SEASON 6" had he been there.

You Have To Be Dead To Get Resurrected

Maisie Williams' quip wreaks of someone who is lying. Why would she make such an insensitive remark about Jon's luscious locks if he wasn't poised to return?

People Skirt Issues When They Are Full Of LIES

The panel sure had a lot of fun skirting the issue of Jon's death by only offering a few sentiments on the subject. They clearly did this because they don't want the secret of the character's return to leak before Season 6 revs up. BOOM!

More like this
The Trailer For The 'Game Of Thrones' Prequel 'House Of The Dragon' Is Dark AF
By Grace Wehniainen
Grey's Anatomy Fans Refuse To Accept Kaimelia's Shocking Relationship Update
By Brad Witter
Oops! The 'Stranger Things' Monopoly Game Has Spoilers For Season 4
By Alyssa Lapid
20 Photos From The 'Stranger Things' Season 4 Premiere To Make You Feel Old
By Alyssa Lapid
Get Even More From Bustle — Sign Up For The Newsletter