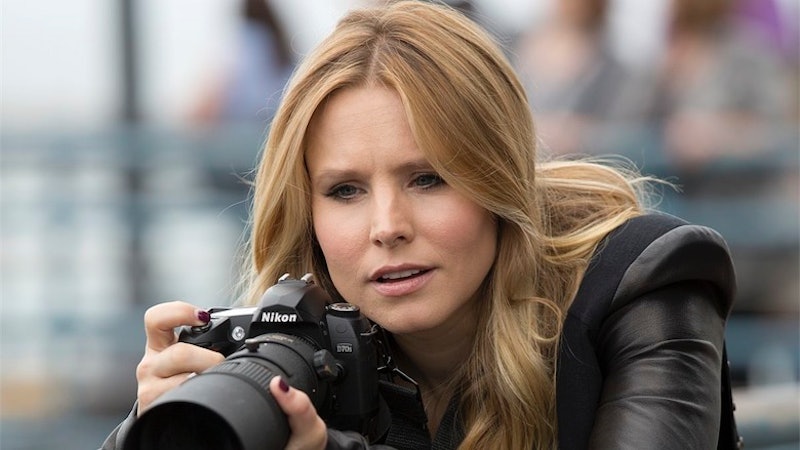 During an interview with TV Line at Comic-Con 2015, Rob Thomas may have just dropped a tantalizing nugget of information: According to the Veronica Mars genius, Thomas and Veronica herself, Kristen Bell, have discussed the possibility of a Veronica Mars Season 4 happening as a limited series in the future — and, even better, "True Detective style." WHATEVER THIS MEANS, I AM INTO IT.

It's likely best not to get too excited just yet, of course, (although, I realize you are likely all screaming into pillows right about now, because I am too) because Thomas also noted that he and Bell are a little busy at the moment: Thomas has The CW's wonderfully quirky iZombie to focus on, and Bell is still busy with Showtime's House of Lies, meaning any possible fourth season or second movie would be further down the line.

However, that does not mean Marshmallows should give up hope. I think we can all agree, Veronica Mars Season 4 needs to exist, no matter how long it takes.

After all, there were seven years between the final episode of the series and the crowdfunded Veronica Mars feature film from 2014, so Marshmallows have proven they aren't going anywhere. Veronica Mars is the rare series where there really is no expiration date on when it can be revived. The fans are loyal, and the main character is a detective, so time is on Veronica Mars' side. Keep hope alive, guys.

Here's more reason why this needs to happen:

1. The Movie Left The Door Open For A Fourth Season

Veronica is back in Neptune fighting against corruption with Keith, Mac, Wallace, and eventually Logan by her side, meaning no characters need to be maneuvered back into position to set up the series. All Veronica needs is a case worthy of multiple episodes worth of investigation, and if Season 4 were a reality, that would be easy.

Despite how busy he is, Thomas is still making time to play in the world of Neptune. He's busy writing books that follow Veronica post-movie — books are part of the canon! When a creator has this much passion for a project, there's no worry that resurrecting it will involve losing any of the magic.

Veronica is an old school detective, the likes of which TV doesn't see much of these days. Her insightful, darkly funny commentary on the corruption plaguing Neptune gave TV its best noir hero when this show was on the air. Veronica kicked butt, solved crimes with her keen sense of observation and research, and was a flawed hero who everyone rooted for. Without her, the crime genre is a sad place.

Veronica Mars was pretty much made for the limited series format. Instead of going episodic, Thomas could construct the kind of intricate crimes he was known for giving Veronica with more time on his hands. The result would be a fourth season that could focus on the two things the viewers love most: the characters and the cases.

5. Logan Needs To Be Back On TV

Life without Logan Echolls is beyond depressing. His snark, his puppy dog eyes, and his general awesomeness are all dearly missed. Also, for some reason, Jason Dohring isn't a huge star yet, and the guy is such an incredible actor he deserves to be front and center gain.

6. Everyone Needs To Know What Happens To Veronica And Logan Next

Veronica and Logan are the OTP to end all OTPs, and I truly believe their love story will never get old or end. As Logan said, "I thought our story was epic, you know. You and me. Spanning years and continents. Lives ruined and blood shed." They aren't done breaking everyone's hearts and knitting them back together again — not by a long shot.

7. Veronica and Mac Are Running The Detective Agency

I want to live in a world where Veronica and Mac are solving crimes side by side everyday. Is that too much to ask? Because I really don't think it is.

I don't care how long I have to wait. I need Veronica Mars Season 4 to happen, and knowing Thomas and Bell want the same thing gives me hope I haven't seen the last of Neptune yet.